I'm growing some plants on my balcony. at least that's the plan. I put the seedlings out in direct sunlight one day and 1 of em got burned, so I've only been putting them out in non-direct sunlight now. the rest of the time they're inside, in front of windows, generally well-lit. they're only 8-9 days old. 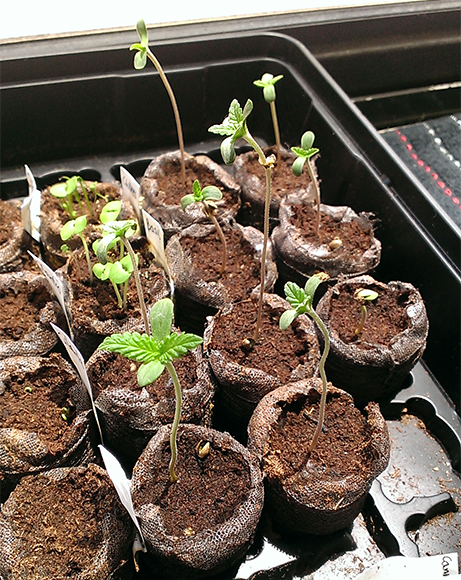 should I get a nice indoor light to supplement while they're inside? will these guys be able to handle direct sunlight after they grow a bit more? will they like it? :]

I've got the 3-stage FoxFarm nutrients coming. is it advised to fertilize the plants with anything before those or aside from those? especially now at beginning of veg stage? right now they're getting spring water.

Just looking for some good advice, I don't need / know I'm not aiming for crazy yields, but I'd like to see some good success and keep the plants healthy.

1= If you are going to grow them outside, then just put them out there now if the temperatures are good. They were originally outdoor plants, before we brought them inside.

2=Cal/mag may be needed. And you will have to check and possibly adjust the PH of your water after adding the nutrients. Outside you will have to be watchful for insects and other outdoor related pests, for which you may need some sort of pest control.
7 Strain STS seed run TS3000, SP250 and SF4000 in Peatmoss Current Journal
Labexperiments 9 Strain Indoor Peat 600HPS & TS3000 Completed
Brainstorm Haze Seed Run Completed
C


labexperiment said:
1= If you are going to grow them outside, then just put them out there now if the temperatures are good. They were originally outdoor plants, before we brought them inside.

2=Cal/mag may be needed. And you will have to check and possibly adjust the PH of your water after adding the nutrients. Outside you will have to be watchful for insects and other outdoor related pests, for which you may need some sort of pest control.
Click to expand...


thanks - can you recommend anything for pest control? proactive necessary?
C

Some strains will be very sensitive to UVB rays when they're just few days old. In my experience that happens mainly to sativas. I burnt 3 seedlings this year in April

If you want to keep them outdoor don't mix lights, different spectrums so they'll get confused. Just steer away from sunlight until they are 7-9 days old. In veg you can also use netting or UVB-filtering plastic dome/cover. For pest control I recommend rosemary oil available through one of our sponsors. Otherwise you can always make it yourself

Happy growing!
___________________________
"The answer is never the answer. What's really interesting is the mystery. If you seek the mystery instead of the answer, you'll always be seeking. I've never seen anybody really find the answer, but they think they have. So they stop thinking. But the job is to seek mystery, evoke mystery, plant a garden in which strange plants grow and mysteries bloom. The need for mystery is greater than the need for an answer.." - Ken Kesey

What is landrace? (Find out here)
S


Cordo said:
thanks - can you recommend anything for pest control? proactive necessary?
Click to expand...


I found the following for pest control because I supplement now with a few hours of outside - noticed a LARGE difference in plant healing, damage done due to training methods, but now getting a few white spots. So I was looking for something myself decided to check out oils


Neem Oil Neem oil is a botanical pesticide made from an extract of the plant Azadirachta indica. Since it doesn't strongly affect humans, mammals, or beneficial bugs, farmers use neem oil as an insecticide and miticide to keep away pests like aphids and white flies. Neem oil even protects crops from fungal infections such as mildew and rust. People use insecticide with neem oil to repel mosquitoes and lice.

The plant that gives us neem oil originates in Southeast Asia. People from these countries have long noted the benefits of crushing the leaves and stems against their skin to keep off biting insects like gnats. A wider industrial and commercial use was found for the potent oil by grinding the seeds of the neem plant. When the oil is distilled from seeds, its concentrated mixture contains high amounts of the active chemical azadirachtin.

Azadirachtin-rich neem oil gets sprayed on crops as an organic substitute for other harsher insecticides that might be carcinogenic or have limited uses. Neem oil repels harmful insects like white flies, gnats, aphids, mites, and weevils, as well as strengthening the crops against rust, scab, mildew, and blight. Edible crops of vegetables do not get poisoned when neem oil is used.

Neem oil makes the plants it touches taste bitter, so pests won't eat them, as a "contact" insecticide. Azadirachtin also interrupts insects' transitions between different stages of metamorphosis, such as growing from larvae to pupae. It prevents insects from developing a hardened exoskeleton. When the chemical gets absorbed through the roots of crops, it functions as a "systemic insecticide." That means crops don't need to be constantly re-sprayed.

The greatest benefit of using neem oil is that it doesn't harm beneficial insects. Butterflies, earthworms, and bees all help plants pollinate or absorb nutrients. Lacewings eat insects trying to feed on the crops. But these bugs won't have a negative reaction to neem oil or azadirachtin.

Neem oil has even made it into cosmetic and household products. Lotions and skin sprays use the oil as a mild insecticide that isn't likely to cause rashes. If you soak cotton balls in neem oil and place them in your closet, it will dissuade wool moths from devouring your clothes. While neem oil smells faintly of garlic, many people prefer it to stronger chemical alternatives.

Instead of using copper, sulphur, or even systemic treatments, biological neem oil is used on fruits, nuts, vegetables, herbs, spices, roses, houseplants, flowers, trees, and shrubs. And it is specially indicated on vineyards against mildew, who attacks grapes plants, not only as a prevention, but also as an effective curative treatment.

"...in numerous tests, a spray of 1-percent neem oil in water "stopped 95 to 100 percent of the powdery mildew on hydrangeas, lilacs, and phlox."

A single spray application was sufficient to protect these ornamentals from infection. Repeated applications at 7- to 14-day intervals as the plants grew provided disease protection without any plant damage. On plants where mildew had begun to develop, "it was arrested, providing control comparable to each of three chemical fungicides."

Research at USDA on plant-derived natural pesticides, such as nicotine, dates back to the 1920's. I hear of people buying American spirits and putting it in Vodka or their yeast concoctions to extract a more potent nicotine pesticide- YET nicotine is one of the most powerful poisons when extracted and is one of the things killing off the bees. Beginning in 1975, extraction products from neem seeds were evaluated for their insect-killing properties. Many insect pests may be affected by Azadirachtin including aphids, beetles, caterpillars, lace bugs, leafhoppers, leafminers, mealybugs, psyllids, thrips and whiteflies.


Neem seeds and leaves contain many compounds which are useful for pest control. Unlike chemical insecticides, neem compounds work on the insect’s hormonal system, not on the digestive or nervous system and therefore doe not lead to development of resistance in future generations. These compounds belong to a general class of natural products called ‘limonoids’.
The liminoids present in neem make it a harmless and effective insecticides, pesticide, nematicide, fungicide etc. The most significant liminoids found in neem with proven ability to block insect growth are: azadirachtin, salanin, meliantriol and nimbin. Azadirachtin is currently considered as neem’s main agent for controlling insects. ‘It appears to cause 90% of the effect on most pests. It does not kill insects – at least not immediately – instead it both repels and disrupts their growth and reproduction. Research over the past years has shown that it is the most potent growth regulator and feeding deterrent ever assayed. It will repel or reduce the feeding of many species of pest insects as well as some nematodes. In fact, it is so potent that a mere trace of its presence prevents some insects from even touching plants.’

Neem Oil Processing Certain hormones are necessary for growth and development of insects. These hormones control the process of metamorphosis as the insects pass from larva to pupa to adult. Azadirachtin blocks those parts of the insect’s brain that produce these vital hormones. As a result, insects are unable to molt. It is through these subtle hormonal effects that this important compound of neem breaks the life cycle of insects. The insect populations decline drastically as they become unable to reproduce.

Meliantriol and salannin act as powerful antifeedants. Nimbin as well as nimbidin (another neem component) have antiviral property.

Blocking the larvae from molting is considered to be neem’s most important quality which can be used to eliminate many pest species. Neem products are harmless to most insect eaters, humans and other mammals, except certain marine life like crabs, lobsters, fishes and tadpoles.
In spite of high selectivity, neem derivatives affect ca. 400 to 500 species of insects belonging to Blattodea, Caelifers, Dermaptera, Diptera, Ensifera, Hetroptera, Hymenoptera, Isoptera, Lepidoptera, Phasmida, Phthiraptera, Siphonoptera and Thysanoptera, one species of ostracad, several species of mites, and nematodes and even noxious snails and fungi, including aflatoxin-producing Aspergillus flavus.


Black seed oil is cancer fighter and I'm also trying to find out if it will help with pests. will let ya know

conradino23 said:
Some strains will be very sensitive to UVB rays when they're just few days old. In my experience that happens mainly to sativas. I burnt 3 seedlings this year in April

If you want to keep them outdoor don't mix lights, different spectrums so they'll get confused. Just steer away from sunlight until they are 7-9 days old. In veg you can also use netting or UVB-filtering plastic dome/cover. For pest control I recommend rosemary oil available through one of our sponsors. Otherwise you can always make it yourself


Aw, I killed the sativa

Thanks for the tips. Neem oil seems like a good solution if pests are found. Fortunately my area has very few bugs to begin with, so I'm hoping it won't be a big issue - still going to clean and spray down the balcony before moving the plants out.

O
I'm a starter and I really need help soon