California has the oldest and most liberal compassionate care law among the 23 states plus Washington, D.C. that allow the use of medical marijuana. So why are the state's youngest and arguably most needy patients not getting it? "Charlotte's Web" is a marijuana strain that won't get you high, but parents say it has had a profound effect on the lives of many children who suffer severe seizures.

At 8-months-old, Oceanside infant Connor Dalby began seizing 50 to 75 times a day. "There was no joy. There was no smile. There was no laugh," Connor's father Randy Dalby said. Near Chula Vista, the Benavides family was struggling with their son Robby. Robby's multiple "drop attack" type seizures came without warning at a similar daily rate. "He loses all muscle tone and just falls, falls hard to the ground. He's had stitches on his eye, even bit off his tongue," Robby's mother Allison Benavides said.

Both families say they tried every mainstream medicine drug treatment and every combination available. Nothing worked. Somehow, Charlotte's Web Oil, made from a marijuana strain of the same name, has changed their lives. "My son is seizure free. He is four months seizure free today," Benavides said. Dalby recorded Connor sitting up on his own for the first time just a few months ago. "We're watching a miracle. We have almost lost him a couple times," Dalby said.

The Dalbys and Benavides get Charlotte's Web through the California Chapter of the "Realm of Caring." Chapter Director Ray Mirzabegian hosted the first fundraiser for the non-profit organization at the Universal Hilton in Los Angeles just last month. In the crowd were some guests you might not expect at a cannabis event. At one table were members of the Epilepsy Foundation of Greater Los Angeles. At an adjacent table were UCLA's top pediatric neurologists. Assistant Clinical Professor Dr. Shaun Hussain with frank honesty in a somewhat defeated tone shared his frustration.

"I feel like a carpenter without a hammer. We don't have medications that are good enough," Hussain said. However, Charlotte's Web is hardly a universally accepted treatment. The American Academy of Pediatrics opposes the use of marijuana to treat children. Chief Policymaker Dr. Sharon Levy says she gets a lot of hate mail for it, but that medical marijuana has not been FDA approved or even tested.

"Instead of that rigorous testing and the Federal Drug Administration, we're just approving it by state ballot initiative," Levy said. The cannabinoid or CBD holds the therapeutic benefits to these children. Charlotte's Web is a marijuana strain high in CBD and low in THC. THC is the psychoactive part of the plant that makes you high. "That is the moneymaker in a dispensary, high THC strains, not what Charlotte's Web is," Dalby said.

Only Realm of Caring is selling Charlotte's Web. The group charges patients what it costs to make it. Still, state law requires Mirzabegian's organization to operate like a dispensary. Local laws restrict the number of dispensaries in an area, so Mirzabegian can treat only 27 patients. He says the waiting list is 1,000 families. "Every month, I have a parent or two calling me and saying, 'Ray take my child off the waiting list. He didn't make it," Mirzabegian said. While California has no such legal limits, medical marijuana advocates say keeping more than six mature plants and a half pound of processed cannabis per patient could invite a police raid.

Marijuana remains on the federal government's controlled substance list. If you are in possession of more than 99 plants, the punishment is a five-year mandatory prison sentence. "Who cares if you have 1,000 sick children dying? You have to grow 99 plants only is that logic. It doesn't make sense to me," Mirzabegian said. While the American Academy of Pediatrics opposes the use of medical marijuana, Dr. Levy says as a mother, she would not discourage parents from trying it if their children are suffering life-limiting illnesses. 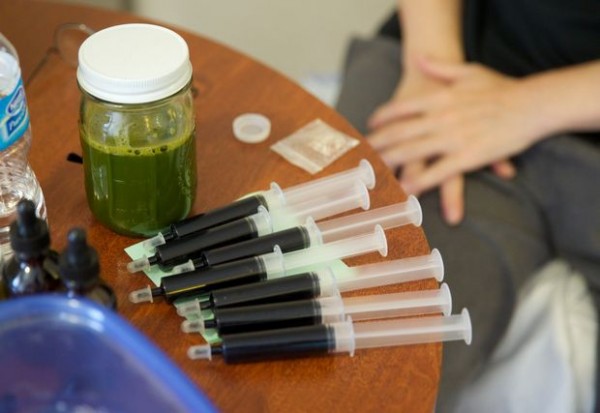 With ya bro'. Our collective's mission is to:"Maximize CBD production and distribution. Period".
M

if i could find seeds i'd be growing it... i have tried 2 different places and the plants that came up were not charoletts web, they went to make oil for cancer patients but the oil was too potent to be good for kids.