Georgia - Advocates for legislation that would allow medical cannabis oil in the state testified Wednesday at Mercer University in front of a legislative committee tasked with examining the viability of a law change. More than a dozen people who suffer from various health issues or have a loved one who suffers offered anecdotal evidence that cannabis oil with low levels of THC -- the substance in marijuana that causes a "high" -- has made a positive impact in lowering the number of seizures for some children in Georgia. They also said the oil has helped people with other serious medical issues. People who leave Georgia to seek treatment elsewhere, most notably Colorado, where marijuana is legal, have been labeled "medical refugees."

State Rep. Allen Peake, R-Macon, serves as co-chairman of the state's medical cannabis committee along with state Sen. Renee Unterman, R-Buford. Peake championed a cannabis oil bill during this year's legislative session, but it died because of political bickering. Peake said he hopes the series of five hearings held across the state will eliminate the political hurdles that kept a new law out of reach. "This has been a good education process for all of us," Peake said after the three-hour hearing in Macon. "I think we learned a lesson last year about political gamesmanship, that it's detrimental to residents of the state. I think (the issue) will be able to move on its own."

Peake first got involved in the medical marijuana debate more than a year ago when the Cox family from Monroe County was seeking a way to get cannabis oil for their daughter, Haleigh, who was suffering from up to 200 seizures a day due to Lennox Gastaut Syndrome. Haleigh's father, Brian Cox, testified Wednesday that since his wife and daughters moved to Colorado to get the cannabis oil for Haleigh, her seizure rate has dropped to one seizure in an eight-day span. Cox noted that Wednesday was his wedding anniversary, and like many families in his situation, the family has been split between the two states because they can't afford to pick up and move to Colorado entirely.

Several other Middle Georgians also testified Wednesday. Daryl and Linda Hayes of Macon said their son, Daryl Jr., suffered such seizures and needed extensive care. He said the Bibb County school district couldn't meet his needs so the family spent more than $100,000 to send him to a school in South Carolina equipped for people with his condition. Katie Crosby of Macon has lived with chronic and constant intense pain since she was 15. Her pain was later exacerbated by a car accident. She said most of the conventional, prescribed pain medication hasn't helped her condition, but cannabis-based treatments have. "If (the legislation) doesn't pass, I'll have to become another medical refugee," she told the committee. "I love Georgia. I love this great state."

Some said in the hearing that they want legislation that allows all marijuana use, since the cannabis oil can be made in different combinations. Joshua Littrell, a former Air Force veteran, said he moved to Vermont where he was able to obtain the necessary paperwork to cultivate marijuana plants for his own use. He said the process is heavily regulated. Another veteran, Perry Parks, who flew helicopters in Vietnam, also advocated for use of the entire plant. He noted that veterans in 23 states can be treated with medical marijuana because it's legal, but in the other 27 states, veterans risk going to jail if they use it.

Peake said he isn't considering legislation that would allow using the whole plant or any combination that has a high level of THC. "The push from Day 1 has been to limit the amount of THC," Peake said. "That's been the basic premise, and that's what we're taking a look at." Peake opened the meeting by asking for a moment of silence for Trinity Sumlin, an 11-year-old who suffered from excessive seizures and died last week.

Some of the most important testimony Wednesday came from Jason Cranford, formerly of Warner Robins, who now lives in Colorado and operates a nonprofit agency called the Flowering Hope Foundation. It provides low-THC cannabis oil to many families, including the Cox family. Cranford said he's involved in research with Colorado State University and has years' worth of data from his time working for a pharmaceutical company to make the oil.

He was the first researcher to develop a strain of marijuana that's low in THC. When asked by Dr. Matthews Gwynn, an Atlanta-based neurologist who is advising the committee, why Cranford hasn't published his research, he replied that he can't find a neurologist willing to risk his reputation to be associated with the study.

When Peake suggested Gwynn, the doctor replied that he would recommend someone to Cranford instead. "That's what they all say," Cranford said, while noting the oil has shown to have positive impact on cancer, multiple sclerosis, cystic fibrosis, Alzheimer's disease, and Parkinson's disease. The oil also has helped with pain relief and seizures.

State Rep. Micah Gravley, R-Douglasville, drew the biggest cheers from the packed room when he noted that people don't die from overdosing on marijuana. After hearing all of the testimony about the positive impact that medical cannabis has had, he said Georgia should look into research but shouldn't wait to start allowing it to be used for treatment. "I don't think we need to wait," he told the crowd. "I don't know what the definition of proof is, but (these stories) are proof enough for me." 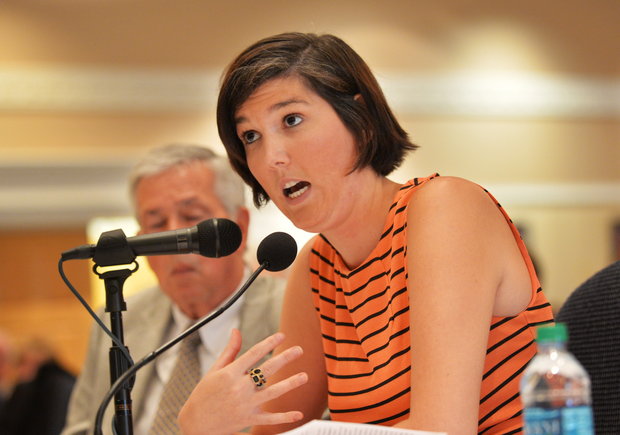