As the clock approached midnight on March 20, the final night of the 2014 Georgia legislative session, it became apparent that a final vote to send a medical cannabis oil bill to the governor's desk for his signature was not going to happen. So I decided to avoid the usual closing celebration in the House chamber because I knew I needed to be in the Senate gallery with the families who fought so courageously for the cannabis oil bill. The mood was obviously somber among the parents, some of whom had brought their children with them, hoping to watch as history was made. The families were crushed, and defeated, that the legislature had failed them and their children. And I shared their frustration.

The feeling of despair that evening was not from anger at the process failing. Instead, we were all aware of the terrifying thought that some of the children that this very bill was intended to help would not make it until the start of the next legislative session in January 2015, when we could try again to legalize medical cannabis oil. A child – or maybe several children – would die because they didn't have access to a medicine that offered life-changing positive effects for children in states where it is legal. My fear on that last night of the legislative session was: Which one of these families would fall victim to the nightmare of every parent who has a child suffering from a seizure disorder – the one final seizure that takes their precious loved one from this Earth? Well, now we know. His name was Abe. He was the 6-year-old child of Mike and Kelli Hopkins, who live in Covington. In July, he died as a result of a seizure.

His parents had come to the Capitol during the legislative session to beg lawmakers to pass House Bill 885, the medical cannabis bill. They are some of the most courageous parents I have ever met. They have three special-needs children, and one healthy daughter.The Hopkins family didn't have the option of moving to another state to obtain cannabis oil for Abe. The logistical, financial and travel challenges were too great. Therefore, they pinned their hopes on Georgia passing a bill that would allow them to give their child this life-changing oil. This strain of cannabis has elevated levels of CBD (cannabidiol, the compound in cannabis that has medical properties), and is low in THC (tetrahydrocannabinol, the psychoactive component in marijuana), and has been drastically reducing seizures for kids in Colorado and other states where cannabis oil is legal.

This particular cannabis oil cannot make a child "high." CBD can, though, help reduce, or even eliminate, seizures. But the Hopkins family couldn't obtain this particular strain of cannabis in Georgia, so they worked to help pass the bill, and when it failed, they prayed that Abe would not have that final, fatal seizure before the next legislative session convened in January. Tragically, he did have that seizure. So now, we are left to wonder how many more children won't make it until next year. How many more funerals will those fighting for this cause have to attend? How many more parents will have to bury their child as a result of a seizure?

Over the next several weeks, the Medical Cannabis Study Committee will be meeting all over the state to hear from families, law-enforcement officials, the medical community and medical cannabis experts about why, and how, to draft legislation in 2015 to legalize medical cannabis in Georgia. You can find out more at the Facebook page for the Georgia Medical Cannabis Study Committee, or you can call my office. We want to hear from citizens regarding this issue. My colleagues – Democrat and Republican, black and white, liberal and conservative – support this legislation and are committed to passing a good bill that works in Georgia. And Gov. Nathan Deal has taken the leadership to find a solution within current state and federal law through clinical trials at Georgia Regents University.
This effort is about helping citizens in our state, giving hope to families, and offering relief to those who are suffering. Many have taken bold stances to stand up and fight for this cause, and I couldn't be more proud to stand with them. House Speaker David Ralston has become a passionate supporter of finding a solution for Georgia families.

The momentum is there. We just need the wisdom to find the right solution, one that really does work for Georgia. We owe that to our citizens. We owe that to Mike and Kelli Hopkins. We owe that to Abe, to honor him and the memory of his short life. We. Cannot. Move. Fast. Enough. State Rep. Allen Peake, R-Macon, represents portions of Bibb and Monroe counties in the Georgia General Assembly. He is secretary and treasurer of the House Majority Caucus and vice chairman of the Ways & Means Committee. 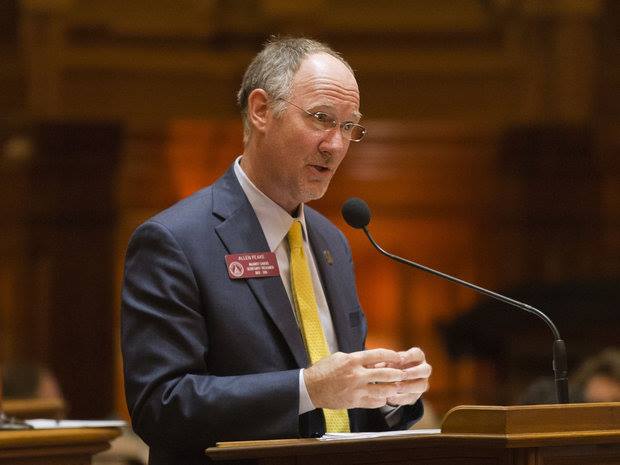