What's up 420 fam! This is my very first grow journal and coincidently enough, my first grow altogether. I spent a bit of time on here as a pure spectator without a voice and now I'm thinking it's well time I came off the bench and got my ass in the game.

so without further ado, I invite you to pull up a chair and get lifted as I clumsily make my way across the finish line as a noob grower

So after culling through page after page of how to properly germinate w/ high percentage rate, I decided to soak all four seeds in tap water before plugging them each into a rapid rooter. I had a limited budget going in so there's no fancy humidity dome or heat mat to help the girls along. Some people swear by them, others are in total opposition so I decided to skip it.

Anyways I've rambled on a bit. Let's list the gear and get to some pics!

Soon as I can figure out how to upload pics....standby 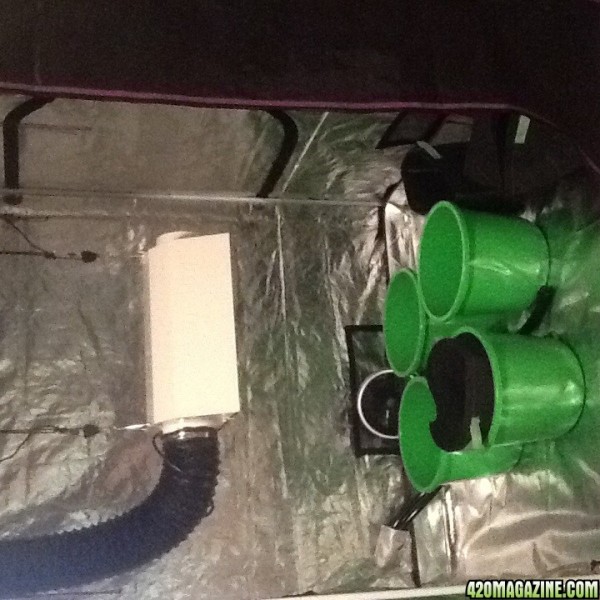 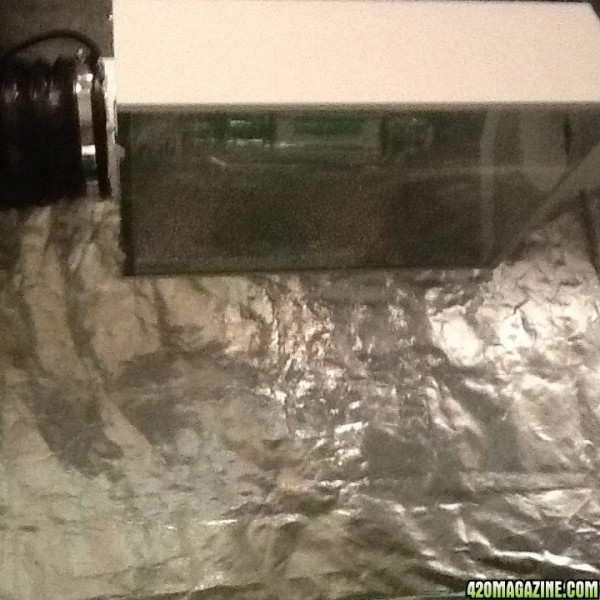 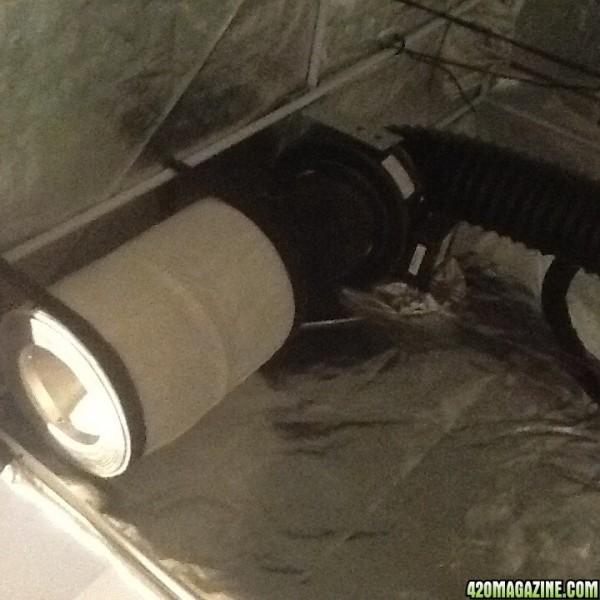 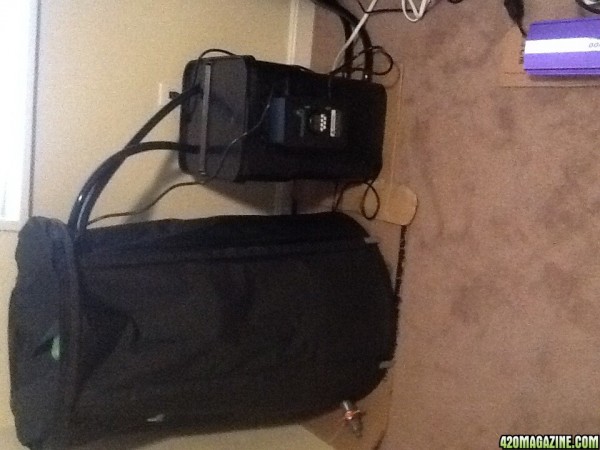 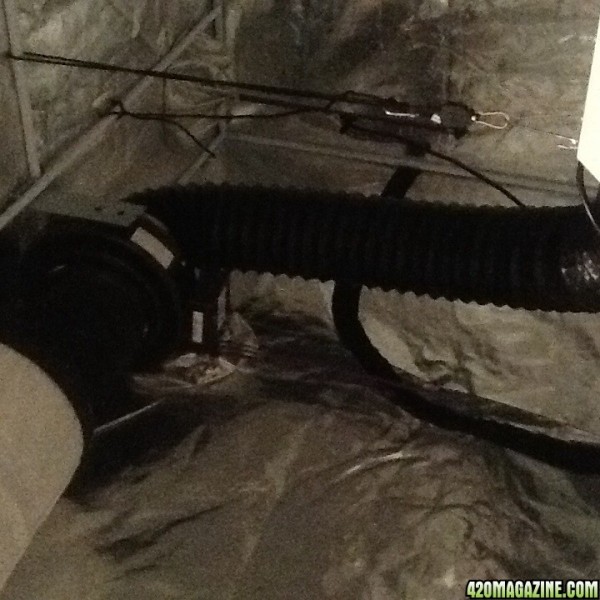 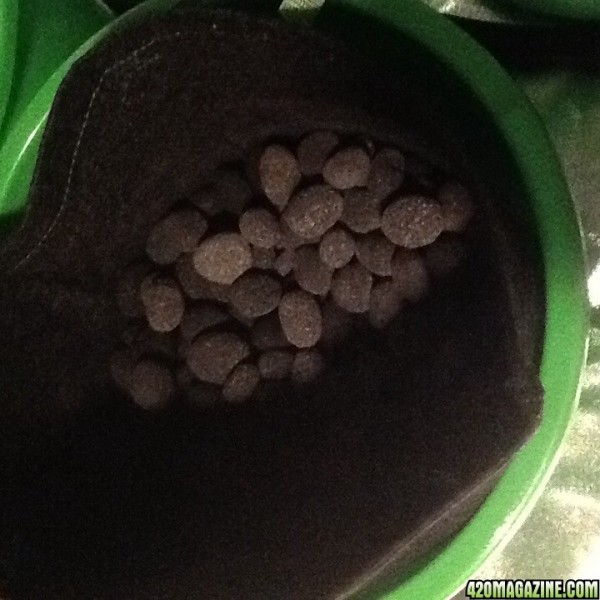 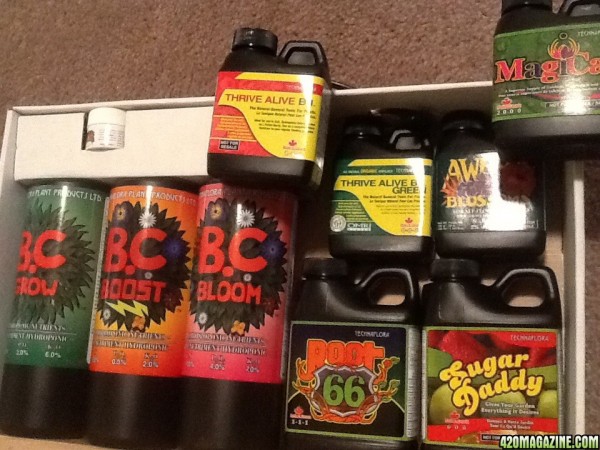 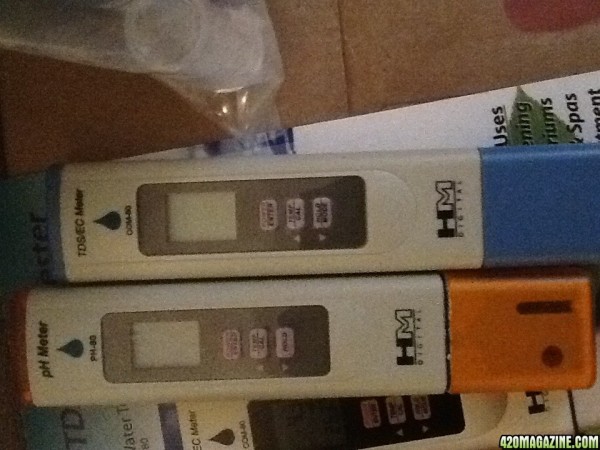 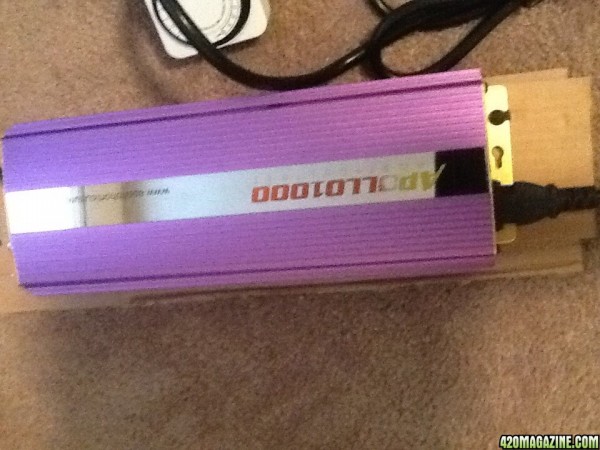 Any veterans out there that might be able to advise me on whether it's alright for me to leave the other end of the hood open? There's a 10in oscillating fan on the floor that I figured would quell any sort of circulation issues. But not having really run this setup or any ever, I would defer to the expert now having had a peak at what I got going on.

Will it be too hot?

Just plain ole tap water and into a cupboard for about 24hrs. When I came back to check on them over that period, they seemed to sink one at a time with varying lengths in between each. 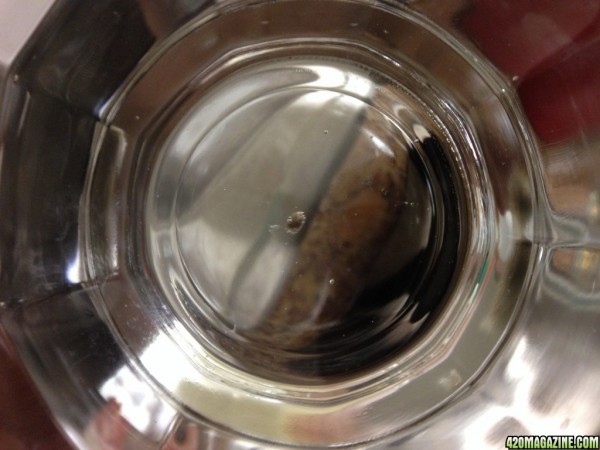 From the glass to rooters and into a big ass pot with a lid. Then back in the cupboard for more blackout time 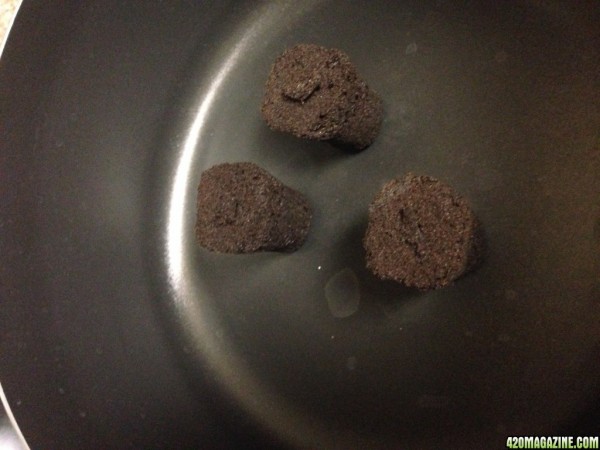 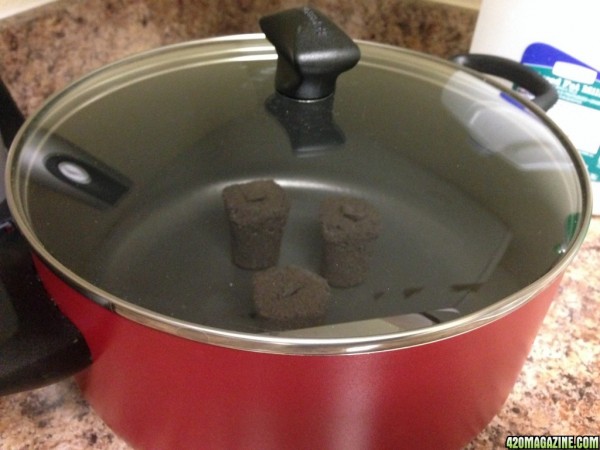 That's the very beginning in broad strokes. One seed was crazy fast in popping thru to the surface. The others lagged behind a bit. Prompted me to create a makeshift seedling hut for tanning. This is my eldest little miss Barbara Sue(arbitrary name given to her by my buddy).
Last edited: Jan 1, 2015 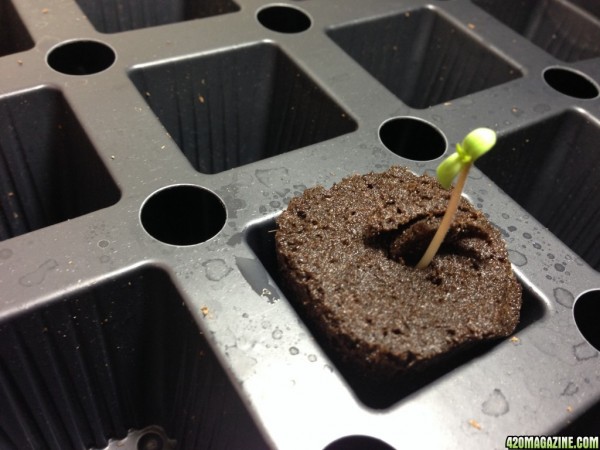 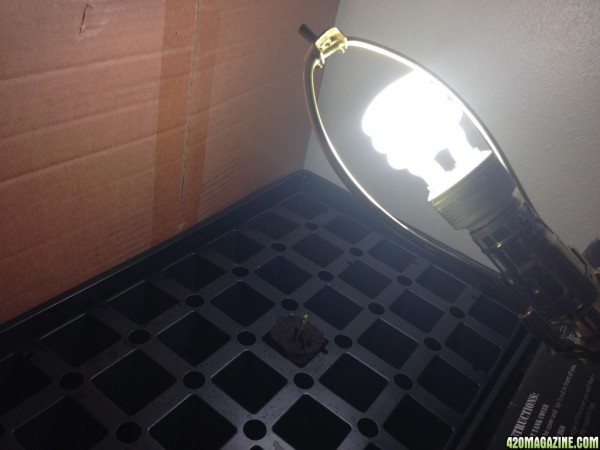 Whaaaadup 420?! Anybody out there? Got a few views and no chime ins :tokin: feels like playing to an empty room a lil bit

Welcome Peaky..
That's some great gear you got.As far as your venting goes,Im not seeing were it's venting the hot air out?
I would maybe put the scrubber on the other side of your light,pulling air threw the scrubber first then pulling threw hood and out of tent.
Im just going by what I can see in the pic's so I could be way off on how it's running.
Congrat''s on the sprout.

I had one LSD that was a freebe but it never popped.
Looking forward to the Oxygenpot system.Been watching that system for some time now,just a bit out of my price range at the moment.
Stick around man there will be other's by soon ,there ton's of knowledge here.
Im subbed and will chime in if I think I know what Im talking about.I also didn't see a hygrometer in any pic's or on your list of gear.Maybe throw one in the tent and give it a dry run,if possible.

Dont forget to vote in this months Contest....

glad to have you ride shotgun on this one. And way to go on that nug of the mo for April. I can only hope to luck up on a cool accolade like that cuz I'm knees n elbows minus green thumbs.

Anyway, after I saw your post I made a quick trip to acquire that hygrometer(I looked the damn thing up, yet it missed the shopping list) 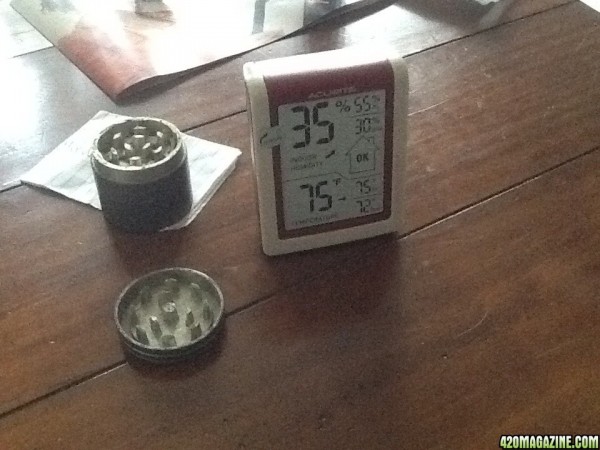 But! A bong rip later and it's all good

The gear list req'd a lot of bargain hunting. The system in particular I fretted over for months before finally deciding on it. That, coupled with dumb luck of the site running a 25% off sale on everything around black friday(not the exact day) is what made it affordable for me. Most places listed a price that kept it out of my range and had me eying others, but still wanting this one.

You're 100% right as of right now the hot air isn't rigged to leave the tent. May be hard to tell from my crappy pix; but I'm gonna throw up another piece of ducting from the hood to the vent and blow it out the side.

Yea man,the best way to cool down a tent is to get the hot air out.
Your working with a 1000w hps and they put out a lot of heat.
I see your using Apollo ballast.I also use one and they have a dimmable option,which is nice.
You can start them on 50 percent and move it up has they get older.
Im looking forward to it all set-up a running.
Also you may want to move your cfl a little closer to help with stretching.You can get it as close as 1-2 inch's without doing any harm.Keep very close eye on them tho,it will grow it to the bulb if don't adjust daily,but again it mat just be the pic.
Dont forget to vote in this months Contest....

Jimmy6000 said:
Yea man,the best way to cool down a tent is to get the hot air out.
Your working with a 1000w hps and they put out a lot of heat.
I see your using Apollo ballast.I also use one and they have a dimmable option,which is nice.
You can start them on 50 percent and move it up has they get older.
Im looking forward to it all set-up a running.
Also you may want to move your cfl a little closer to help with stretching.You can get it as close as 1-2 inch's without doing any harm.Keep very close eye on them tho,it will grow it to the bulb if don't adjust daily,but again it mat just be the pic.
Click to expand...

Good looking out Jimmy on the cfl stretch tip. I actually got it in there pretty got dang close and maintained 2 bulbs maybe 2-3in away for the majority of their time in there. Hell, still got three in there.

That ballast is currently sitting on 50% w/ gas lamp routine going. Day one for my eldest. I'm waiting on a few more bags of lava rocks, which should be here by next week. Then I'll transplant the siblings

I'll post pics which I'd been meaning to do :rasta:

The Bride got her name from the first scene in Kill Bill when we see her all effed up in her wedding dress at the church. That's how I walked in on this lil lady after she broke ground for a day or so sitting in the dark while I was away. She's since bounced back from cfl rehab like the real Beatrix Kiddo

Rita has that name cuz she came flying out of the gate much quicker than anyone else. Last seed into water and a plug. Quickest to sink and broke ground right on the heels of her sisters, only she couldn't get her damn helmet(shell casing) off. Had to remove it for her.

Calamity Jane has had a heck of time coming into the world. Somehow she got all twisted up inside the plug and I'd hoped she'd correct herself but I have to slice the rooter open to free her. First night under the light she popped up as if to recover. But since then stalled completely. Assisted with helmet removal as well but still nothing 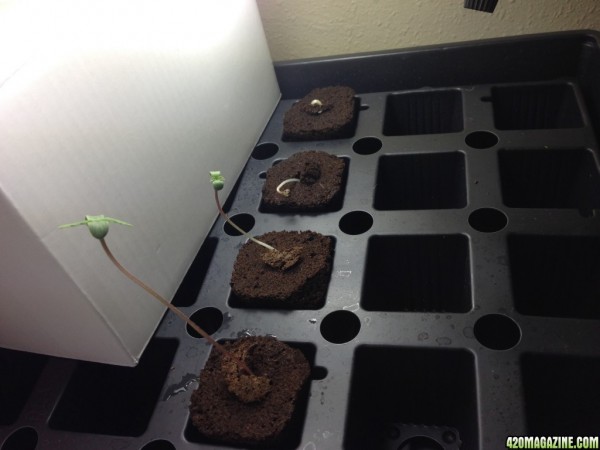 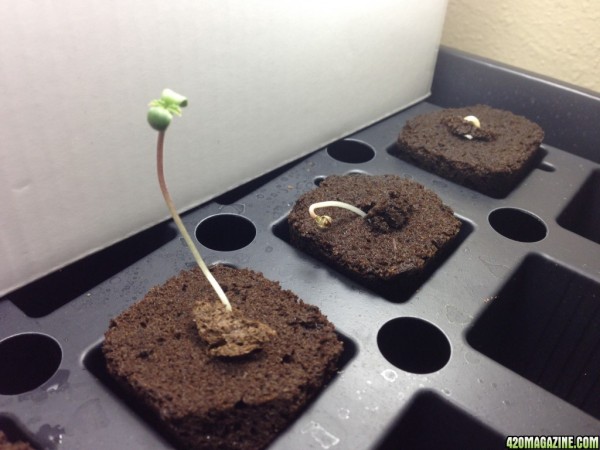 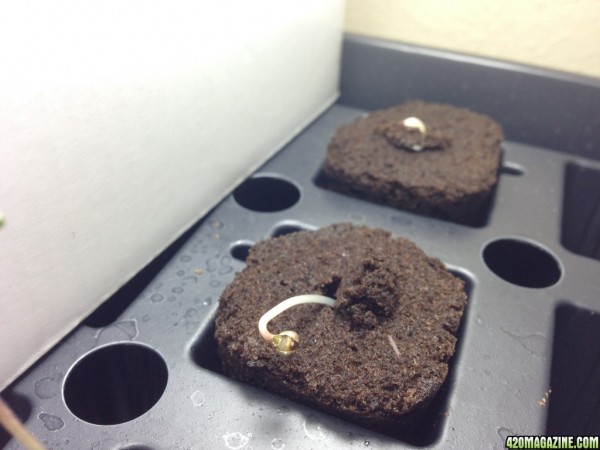 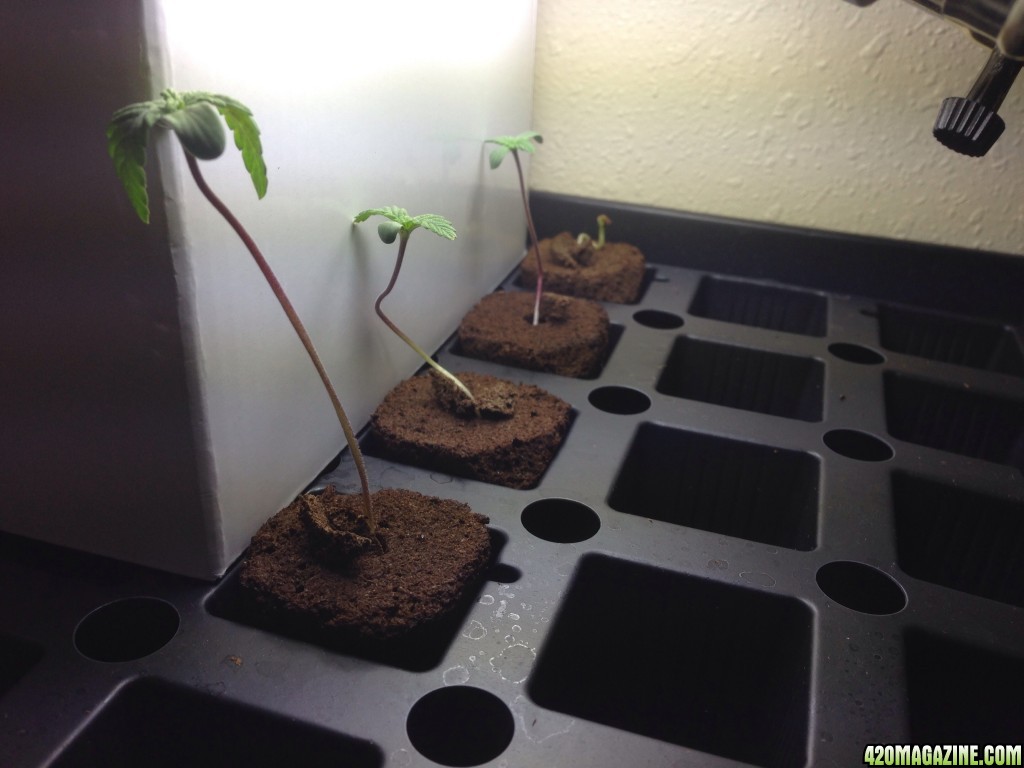 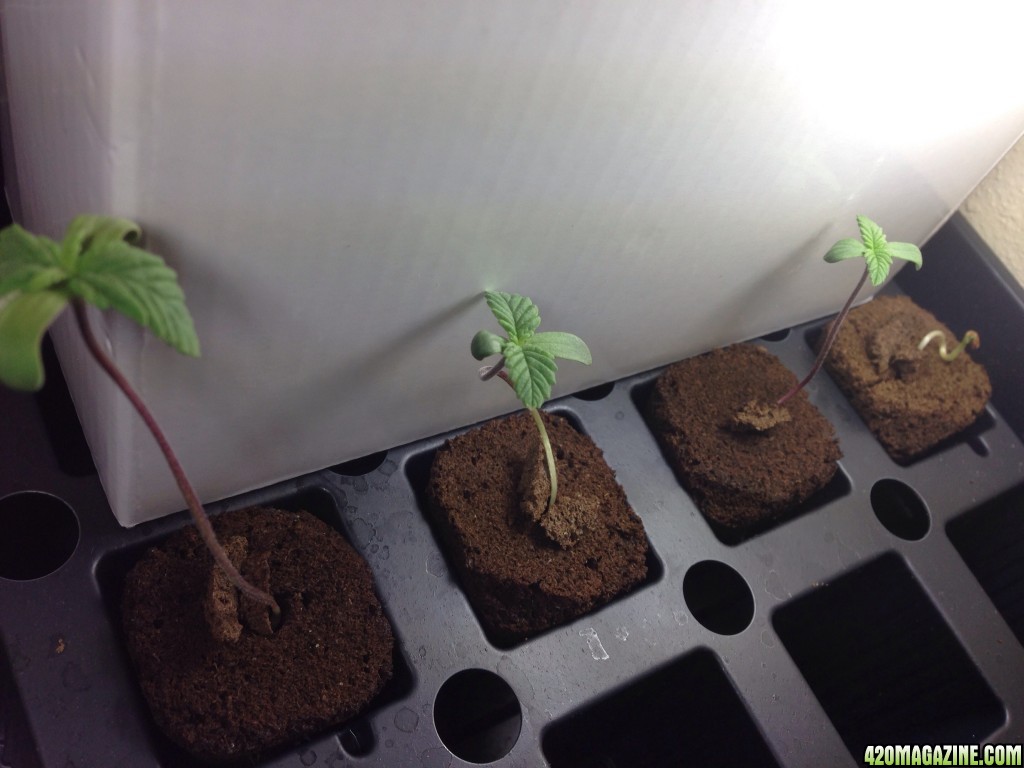 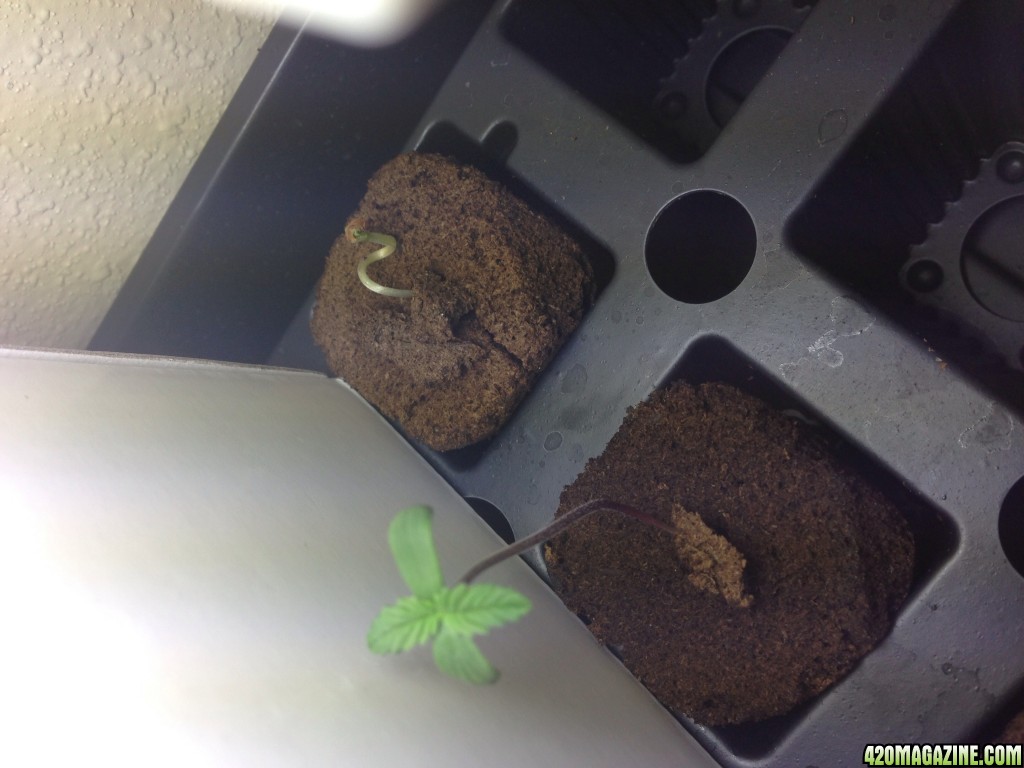 Anyone ever come across this sorta thing?

Today Dec 2nd! Finally all caught up on this thing. Today is day one veg in the tent for B.S. Just running ph tap water at 7 for a few days hopfully can hold off on the nutes til the remainder of my rocks come in next week. Prefer to make the next two transplants so they're all on the same schedule.

Using gas lantern routine with one 5min flood every 3hr during lights on. One more 5min at the one breaking up the dark period. Pics to follow 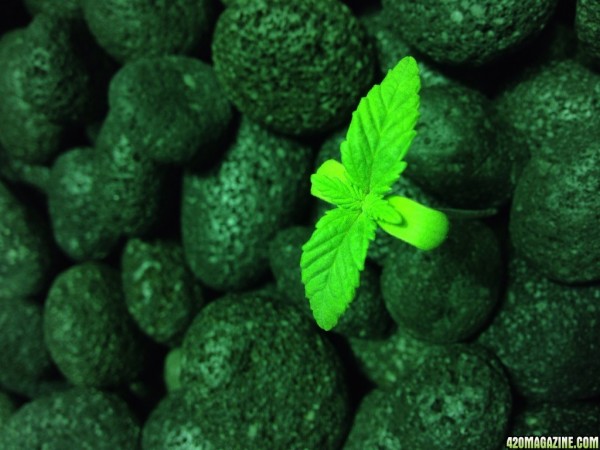 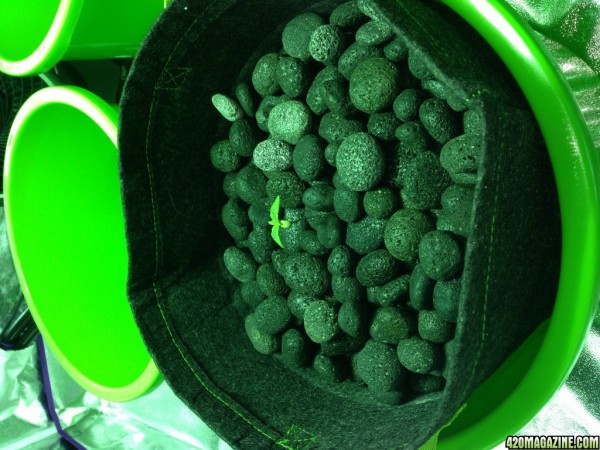 Here's BS hanging tough in the trenches all alone. 1000w ballast sitting on 50% for the time being. Her leaves began to droop a bit while she was under the cfls, assuming because she'd outgrown the space. Now those leaves have perked right up

I was gonna say that they look like there ready to be potted up.I know in soil,peat,coco whatever,that when you pot then it will help them stop stretching.For some reason I always got wicked bad stretch from seed using plugs and rockwool.
Awesome your running GLR.Iv'e not ventured that way yet,but hear and see other member's swear by it.
All in all there looking good.I assume you got the venting all worked out?
Dont forget to vote in this months Contest....

I've been trying to compensate for the mad stretch issue by keeping the CFls close as possible but you're right they're ready to be potted up immediately. Problem is I've still got between 1-3 more days before my rocks come in so I'm :30: trying anything I can. Moved the rooter tray with my remaining seedling into the room next to the one girl that's already potted.

I was away for a couple days and in that time tragedy struck. Calamity Jane just shriveled up after many days being stagnant and some packaging apparently fell on top of the bride as well. So I'm doing my damnedest to see RV make her way into a pot in that room next to her sis.

I figure I'll hand water her during each flood schedule during lights on and the dark period should potentially lower whatever stress she may have been under.

Four sprouts, now down to two...

Btw yes Jimmy I did get that venting worked out. Take a look buddy 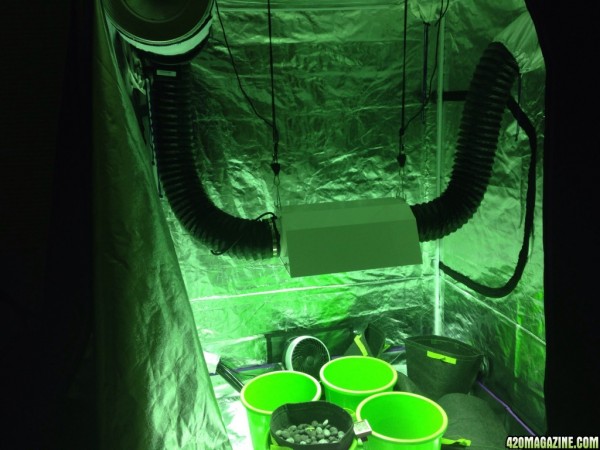 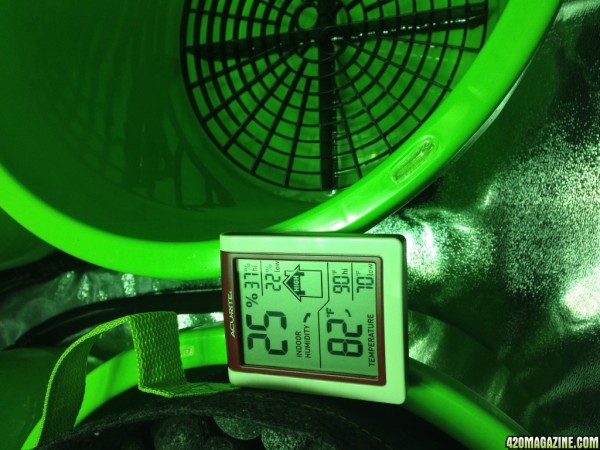