Pennsylvania lawmakers cast their first vote today on creating a medical marijuana program, with state Senate panel members giving their unanimous approval. Senate Bill 1182 passed the Senate Law and Justice Committee. Neither of the Lehigh Valley's senators, Democrat Lisa Boscola nor Republican Pat Browne, is on the panel. If approved by the full Senate and taken up by the state House, the bill would go to Gov. Tom Corbett for approval. There is no companion legislation before the House, but there are plans for a bill to be introduced in the chamber, said Jonathan Tew, legislative director for state Sen. Daylin Leach.

Leach, D-Montgomery/Delaware, and state Sen. Mike Folmer, R-Lebanon, sponsored Senate Bill 1182, with 15 co-sponsors signing on. Among them is Sen. Jim Ferlo, minority chairman of the committee. "After hearing so many moving and deeply personal stories on the issue of medical cannabis, I am proud that the Law and Justice Committee passed legislation today that meets the needs of patients in our commonwealth," Ferlo, D-Allegheny, said in a statement. "The No. 1 priority of Senate Bill 1182 is patient care and compassion, and the bipartisan bill that we crafted certainly reflects that."

Leach said he thinks there are about 45 votes in the Senate, enough to override a promised veto from the Republican Corbett. The senator also said he's optimistic the bill will get a floor vote before lawmakers leave Harrisburg for the summer. With oversight by a state Board of Medical Cannabis Licensing, the program proposed by the bill would allow marijuana to be grown, processed and dispensed. State residents would need a $100 card from the state Health Department after proving they have a practitioner-patient relationship and written confirmation of a qualifying medical condition. They would be able to access extracted oil, edible products, ointments, tinctures and medical cannabis.

Under the bill, growers could grow cannabis on board-approved land or facilities, and must package and transport their products to testing laboratories, medical cannabis processors or dispensers, according to a news release from Ferlo's office. Processors would be tasked with extracting cannabis oils to create products for sale to medical cannabis dispensers. Dispensers would sell medical cannabis through a registered nurse. Each license requires a licensing fee, an annual renewal fee and any other fees determined by the state licensing board.

New Jersey has a medical marijuana program, among the most strictly regulated in the United States, that began dispensing the drug in December 2012, nearly three years after former Democratic Gov. Jon Corzine signed the bill into law on his last day in office, Jan. 18, 2010. Republican Gov. Chris Christie has been critical of the program, and earlier this month said limited interest shows it's merely a front for legalization. New York lawmakers last week approved a medical marijuana program under a compromise with Democratic Gov. Andrew Cuomo. It makes New York the 23rd state, plus the District of Columbia, to offer medical marijuana. 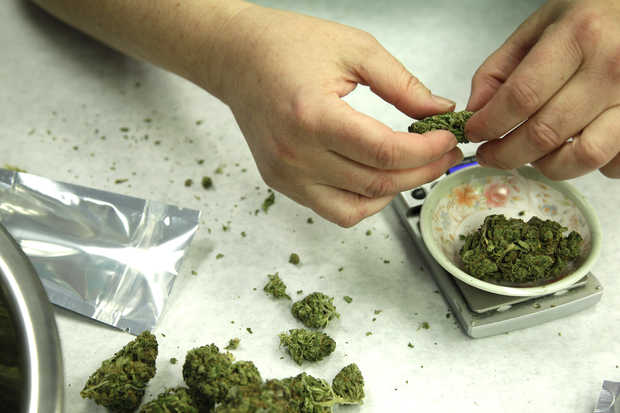