The most frequently occurring plague in cannabis cultivation is spider mite. A spider mite isn't an insect, as many people think, but actually a tiny spider. A spider mite is small, and difficult to discover for the inexperienced eye. But the damage caused is certainly visible. The mite feeds on the sap of the plant, mostly underneath leaves. White specks appear on the upper side of the leaf. After that, you can find spider mites on the undersides of the leaves, and on the stem of the plant. Spider mites make small webs, which you can detect by spraying with water. If there aren't to many spider mites, you can try to get rid of them by removing them by hand. A tedious job 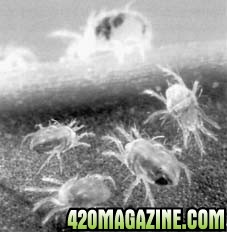 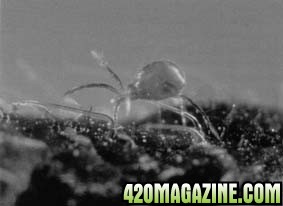 
Treating with insecticide generally gives a better result. In any case, repeat the application after a few days, otherwise, you risk the chance that the whole garden will be eaten. Spider mites can also be controlled with their natural enemy Phytoseiulus persimilis; a predator mite which feeds on spider mites. White flies are also a formidable opponent of the weed grower. It can't be repeated enough: control the climate, and take care of healthy plants. Then, insects will have the least chance to propagate. 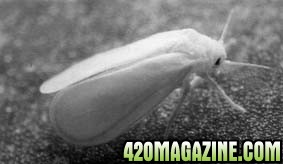 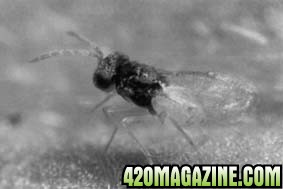 White flies behave just like spider mites. The insect hides underneath the leaf, and sucks it's dinner from it. Result: white spots on the top side of the leaf. White flies are easily spotted with the naked eye. If you shake the plant a little, they'll fly around. They look like little white moths, around 2 millimeters in size. A sizable infestation can be combated with insecticide. If you're not so anxious to use such strong methods, you can purchase a certain type of 'assassinator' wasp: the ichneumon fly (the Latin name is Encarsia formosa). This natural enemy doesn't sting people, but works well at eliminating white flies. Since it's only a small wasp (smaller than the white fly itself), it takes a while before all the white flies have dis appeared. Additionally, you have to put new assassinator wasps out approximately every two weeks. 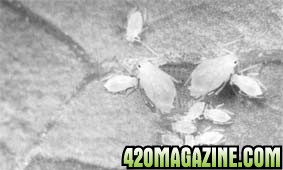 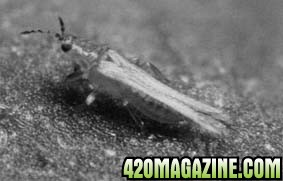 Another common herbivore is thrips. They are small, fast-moving insects with wings. They rasp, or grate the leaves open, and then suck the sap out. Thrips prefer bloom tops, and fresh, young leaves. Affected leaves have shiny, silvery spots. This is caused by the thrips, which suck the chlorophyll out of the leaves. In spite of the fact that they're small, you can see thrips marching in columns on an infected plant. Thrips can be fought with insecticide. It's more environmentally friendly however to unleash the thrips' natural enemy: the predator Amblyseius cucumeris. Lice are found inside as well as outside. During the summer, when lice do the best outside, they also do as well inside. Lice are the most interested in plants with questionable health. There are two methods to kill lice: spraying with insecticide, and setting out assassinator wasps. The problem with most flying pest- destroyers is that they're attracted by the high-pressure gas lamps, which draw them to a fiery death.

The starting point for cultivating cannabis is successful climate control. This goes two ways: the plants do well and produce the greatest possible yield, and diseases and pests get the least possible chance. So, create a good climate, and don't forget hygiene If you're bothered by diseases and/or insects, preferably use natural methods of control rather than chemical remedies. You can fight your pests by releasing their natural enemies, or by spraying with organic solutions for diseases and/or pests. Use chemical pesticides only if nothing else works. Always stop using pesticides a few weeks before harvest, otherwise, you'll be smoking some of the poison later. Ultimately, fighting diseases and pests works best only if you know how to optimally control the climate at the same time. Along with climate control, the prevention (and if necessary, curing) of deficiency disease demands an optimal mixture of fertilizers, and the control of the pH.

If anyone has any natural solutions to pests that they have come across please post them here.

Wow, great thread NDW, where do you find all this awesome information? I can now understand Urdedpal's desire to creat a grow glossary (of sorts) w/links to all these great threads. You guys just keep coming up w/such great stuff! Though I must say, the pics are a bit ichy LOL

O
How To Keep Pests/Bugs Away Naturally!

Guide To Identifying Your Pests

How to stop insects and fungi from ruining your garden.