Two large "joints" passed through downtown Philadelphia Monday as marijuana advocates marched toward the Democratic National Convention's headquarters to call for the full legalization of the leafy drug.

Members of DCMJ and the Philadelphia chapter of the National Organization for the Reform of Marijuana Laws helped to carry the 51-foot-long inflatable objects shaped like marijuana cigarettes during the "Jaywalk," a nearly four-mile jaunt down Broad Street from City Hall to the Wells Fargo Center, where the convention is about to get underway.

According to a video posted to Twitter of marchers parading the joints through the city streets, "Hillary, deschedule cannabis now" was written on the side of one of the props.

The second one read, "Berned by the DNC," a video posted by the Washington Post showed.

A Facebook event page states that the groups are demanding "all members of the Democratic Party endorse the full legalization of cannabis."

Despite the message aimed at Clinton written on the inflatable, activists from Philly NORML told the PhillyVoice in an interview ahead of the DNC that the march was more of a celebration of strides made when it comes to marijuana reform, rather than an all-out protest.

"Removing marijuana from the Controlled Substances Act was, three years ago, a very radical position. Now, Bernie Sanders has a bill in the Senate about it, and the party is seriously considering it," Philly NORML member Chris Goldstein told the publication. "Are we protesting or are we out there cheering them on?"

So how many people does it take to hoist a larger-than-life joint in an attempt to spark some conversation on the subject? About 20, organizers said on Facebook. And one person in the back, holding the device that fills them with air.

Philly NORML plans to take part in "a series of rally events to raise awareness for a national end to cannabis prohibition" during the DNC this week, alongside other supporters of marijuana reform laws. 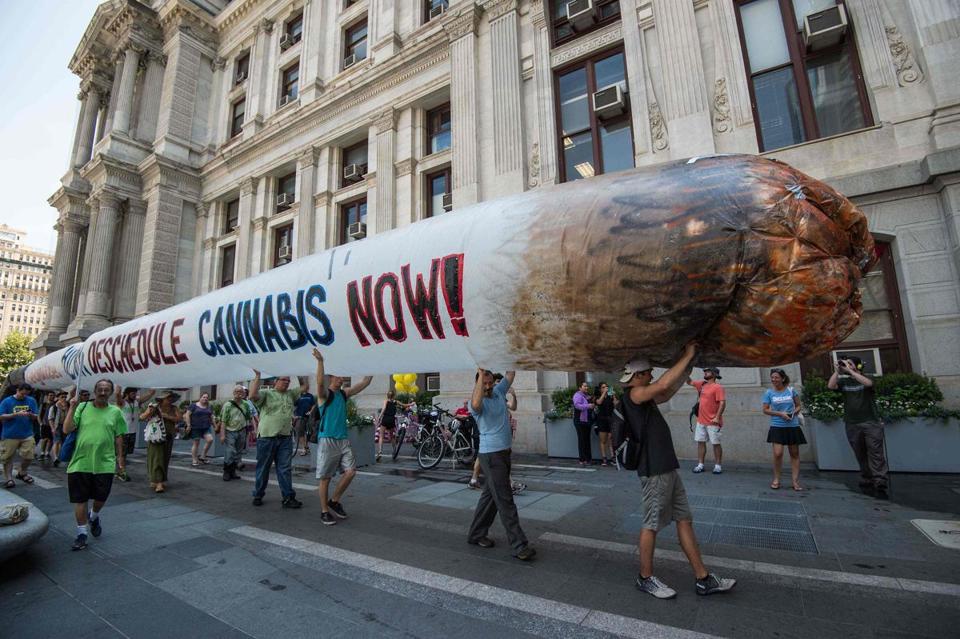