I've read plenty of forums and threads about the mysterious PHIRE glass, "is it a fake american made roor? is it a bluedot? blah blah" its not a roor wannabe its an American Made-German Engineered (the only thing that matters) bong that is just as good if not better than a roor, they use a fatter bowl and downstem than most roors, exact same style diffuser w/ the holes rather than slots
n shit, not everyone has $600 to throw at a bong, I bought this one at a shop called "Natural Mystics" is Fredricksburg, Virginia for $200, and the current roor line up doesnt even have a double percolator and they charge extra for a damn ice catcher from the factory. They are quality pieces but so are PHIRE, hard to find-stone you blind.
and to the whole cult following devoted to hating on anything other than a roor.
Last edited by a moderator: Aug 10, 2007
LEGALIZE ITÂ» PHIRE glass kicks ROORs expensive ass

It's nice. All high quality Glass on Glass waterpipes are nice. If Phire is your preference then more power to you, and it seems like you got a good deal. Myself, I'll stick with the RooR.

But are you seriously going to post a picture of this thing in every single thread you can dig up?

if you had such a nice bong you'd post it just as much, sorry to offend you, dont click on the pics
LEGALIZE ITÂ» PHIRE glass kicks ROORs expensive ass

I said I liked your pipe, it doesn't have to be a RooR to be a nice pipe.

I have posted alot of pictures of my own pipes in threads that I myself have started. You posted this same picture in about 5 other older threads which were not your own, in addition to some less than friendly comments, and I just don't think thats very courteous of you.

Also, I never touted any vast supiriority of RooRs compared to other brands of high-quality waterpipe nor my own personal supiriority because I happen to own one. It's just an expensive piece of glass and nothing more. Anyone with a couple hundred bucks can buy one and whichever brand they choose is up to them. The name of this thread no doubt implies that you feel otherwise.
Si Vis Pacem, Para Bellum- "If You Seek Peace, Prepare For War." ​
"Those who would sacrifice liberty for safety deserve neither." ~ Benjamin Franklin​

Forget both of ya'lls. I am addicted to my PHX! I don't care what any of you say! Three perculators, 17 hole defuser, ice catcher and ash catcher. $350!
Ishmar Rodriguez​
Marijuana

Phire is just as nice as Roor just less expensive. With Roor your paying for the name more than anything. I love my Phire and i've smoked a Roor and nice Phx. 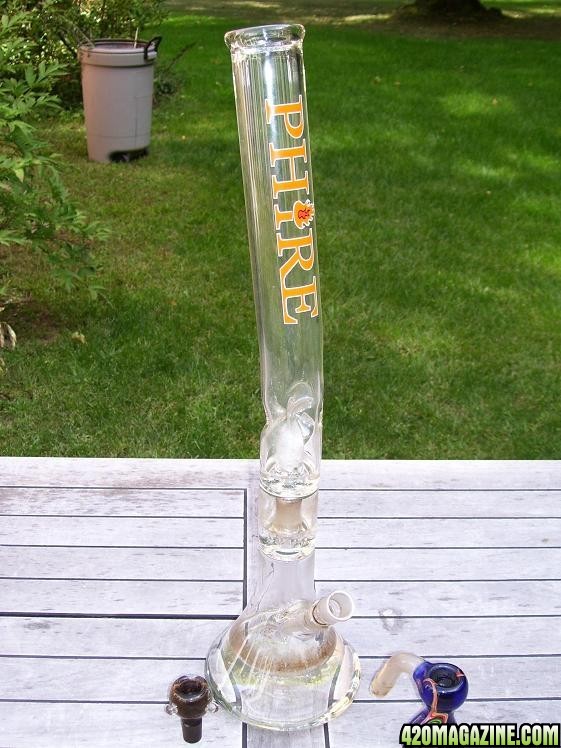 Another very nice pipe. As I stated before it doesn't have to be a RooR to be a nice pipe. Also, I do agree somewhat that you are paying more for the name brand. RooR is a very recognized name so naturally if they can charge more for them then they will.

You can get a German RooR off the internet and USA RooRs and LUX can be found in some local headshops.
Si Vis Pacem, Para Bellum- "If You Seek Peace, Prepare For War." ​
"Those who would sacrifice liberty for safety deserve neither." ~ Benjamin Franklin​
P

I first owned a triple percolated PHX with diffuser & ice chamber purchased at Misfortune's Creation Station in Lawrence Kansas.
I now own a double percolated Phire, purchased at Cooper's in Kansas City which was about 75 bucks cheaper than the PHX.
I have to say the Phire is better than the PHX I owned and my cousin's RooR. The Phire is aesthetically more pleasing, it overall functions and hits smooth enough to the point where you don't lose the bud's flavor, and my favorite part is it has a very large and deep water chamber which demands that the smoke goes through about 9 inches of water resulting in a very smooth hit. The water chamber is also translucent cobalt blue colored glass so the resin is not blatantly apparent when not clean. However I am going to note that in the grand scheme of things, the Phire, PHX, RooR, and all those technology bongs have pretty much the same effect. If you have one, you have them all.
H

^^^thats a unique peice, i don't think i've ever seen a gog piece that had the stem curved like that. Nice tv bong can hit it and watch the screen without tippin the bong
If everybody smoked a blunt to relieve their mind what could be a better place

i still like the old jbd ( big bubbles worked fumed tubes) style over any straight or beaker. to each his own lets just get together and pass around each one.
"The South's Finest"
First Grow - Unknown Sativa Dom

I bought my phire from natural mystics too : ) That's tight!

i like roor and i like phire i was looking for a phire the other day just to see one in person but saw some other impersionators i forget the names but they looked cool...
You cant help someone up a hill without getting closer to the top yourself..


Wake and Bake with Maryjane
B

Phires are just some hmegrown premium glass! I live in socal, and these are blown by a group of blowers in Pasadena i think, and they have three store fronts called Wild Side. Dank ventura county shops and glass...they make gorgeous triple percs, and everything else you can imagine. Supreme quality glass on glass only
D

nice piece dude hows the san clemente mmj club scene?
You cant help someone up a hill without getting closer to the top yourself..


Wake and Bake with Maryjane
J

hydroman said:
Nice tv bong can hit it and watch the screen without tippin the bong
Click to expand...


Thanks bro.
Ehh it's not to hot right now... the Lake forest clubs is were it's at. All high quality bud every time 20-30 dollar g-bos for the dankkks.
T

I hate to be the bearer of bad news, but phire IS Chinese glass. It is imported and then labeled. Believe me, you are not going to get a German glass piece for the prices phire is going for. The people behind phire and misleading their customers and that is wrong. I've never been a fan of Roor personally, but at least it was actually made here in the states (U.S. Roor anyway), but not to the same standards to which it was 10 years ago.
N

I am trying to contact my son Ian who I believe holds the trademark to the PHIRE pipes.Ian if you read this please call me at 8108532186.Mitch
S

NINNY13 said:
I am trying to contact my son Ian who I believe holds the trademark to the PHIRE pipes.Ian if you read this please call me at 8108532186.Mitch
Click to expand...

I would like to know more about Phire glass, did your son start the company?

Will Roor bong diffuser work on a another bong?