Phoenix, Arizona - It's called the 'Shark Tank' for Ganja-prenuers.

'The Marijuana Show' is all about pitching weed-inspired ideas to investors, hoping to strike a deal. A Phoenix mom and her son made their debut in season two.

Andi and Christopher Martin came to the investors with very different ideas.

Andi pitched the family hemp products from their cafe, while her son Christopher came with his hemp oil dog treats.

He told investors he is the CEO of Paw Puddy Pet Products.

Christopher says he was inspired by his best friend Sarge, who is a five-year-old Rottweiler.

"Christopher asked his dad if he could use CBD on Sarge," said Andi Martin. "Would it help his stomach like it helped his dad's?"

With his parents in the hemp business, Christopher learned about CBD, a cannabidiol with no THC. He was hopeful it could help his pup.

"He'll get really sick and we have to give him CBD and it helps his stomach," said Christopher Martin.

After perfecting his product, he took it to the sharks.

One of the investors wanted his own dog to test out the treat. And she loved it.

"For me, as his mom, I couldn't stop crying the whole time," said Andi. "I was just so proud."

"It was scary, but not that scary," said Christopher. "But in the end it was actually pretty cool." 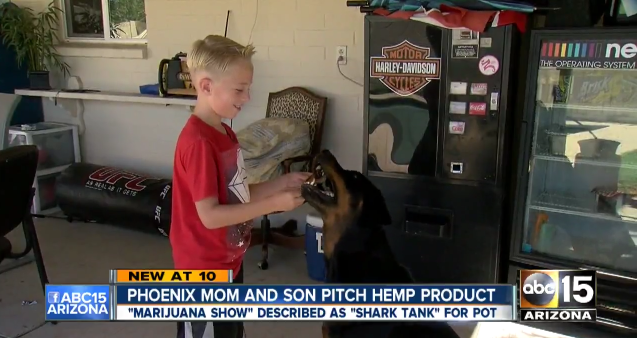