Planning commissioners have approved a recommendation to ban medical marijuana dispensaries from opening within city limits.

Four commissioners voted Tuesday for the staff recommendation, while Commissioner A.J. Fardella abstained from the vote over concerns that it was not constitutional. Two commissioners were absent.

In April 2011, City Council members adopted a two-year moratorium, which expires next April, that stopped dispensaries from operating while staff studied whether to permanently ban their operation. The matter will now go to the City Council on Jan. 22 as an ordinance for approval.

A staff report said the ban was needed in the interest of public safety and that the use of medical marijuana is banned under federal law, even though California voters approved its medical use in 1996.

Pittsburg's action makes it the latest East County city to say no to marijuana dispensaries. Antioch has a moratorium on dispensaries while Oakley and Brentwood have banned them. 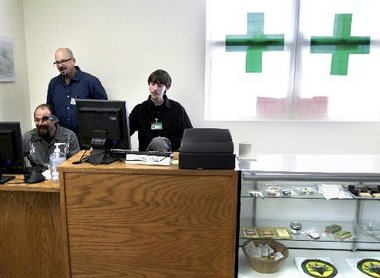 All I read is that the current and possibly past commissioner's don't / didn't want, and all I read here now is they are trying to do it again. Get out and VOTE Pittsburg people...... Or surely all for not!