Nearly half of Americans support legalizing marijuana for recreational use and a strong majority believe it should at least be available for medical reasons, according to a new poll.

The latest Harvard—Harris Poll survey found that 49 percent of Americans polled believe marijuana should be legalized for both medical and personal use. Thirty-seven percent say it should be legalized solely for medicinal purposes, meaning that 86 percent of respondents support legalizing the plant in some form.

Only 14 percent say marijuana should be illegal.

The findings come as Attorney General Jeff Sessions is believed to be readying a crackdown on marijuana users. The Justice Department is expected to release a report soon that criminal justice reform advocates fear will link marijuana to violent crime and may recommend tougher sentences for growers, sellers and users.

"Voters point to drugs as the major source of crime and support tough sentences for drug dealers but view marijuana in a wholly different light," Harvard—Harris co-director Mark Penn said. "Most think legalization of marijuana would probably be helpful in reducing crime and almost half support legalization."
Sixty-nine percent said it would not bother them if marijuana were legalized in their state. Fifty-seven percent of respondents said legalizing marijuana would make society better. And 72 percent said that even if marijuana is illegal, those convicted of possessing small amounts should not serve time in jail.

Still, the poll found concern among voters that crime is rising because of the drug trade.

Nationally, 60 percent of voters polled said they believe crime is on an upward trajectory. Respondents said they believe drugs are the No. 1 cause of crime, followed by lack of jobs, poor moral values, poverty and gangs.

Eighty-eight percent view drug abuse as a serious problem or a crisis.

This week, calling it the "worst drug crisis in our history," Sessions launched an opioid abuse task force meant to root out prescription drug-related crimes.

The Harvard-Harris Poll online survey of 2,051 registered voters was conducted from July 19 to 24. The partisan breakdown is 37 percent Democrat, 31 percent Republican, 27 percent independent and 4 percent other. 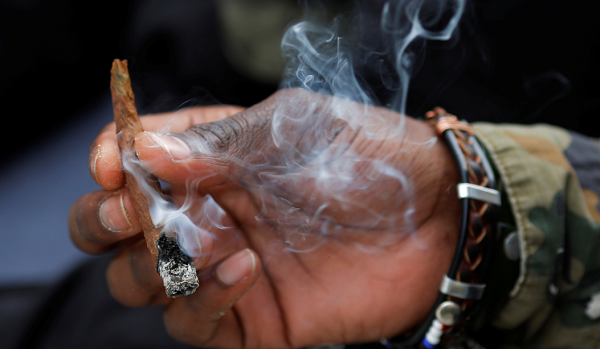 "Only 14 percent said it should be illegal". At what point is this recognized as tyranny?