Seasons greetings and salutations all !

Before you all ask what is wrong with me, and if I am over the age of 13, let me answer those questions for you:

Probably a lot of things and yes I am over the age of 13, 18, 21, 26 and won't go any higher in fear of beginning to feel old. I did create the screename poopypal as a kid, and use it when gaming as well, so if anyone sees me gaming, say what's up!

I've been reading the forum for about a month and decided I should probably start to participate as my grow has started to develop into more than a handful and hopefully I can get advice and wisdom that can help me learn to be a better grower.

I'm a late 20s Longtime toker, and Have been inspired by my states new laws ( MA, aka Gods country ) that allow me to practice growing! I actually have always gardened and maintained vegetable and flower beds routinely. I am no expert, but a seasoned hobbyist at the very least, and prepared to work hard to get the good results.

I am just staring indoor growing and know absolutely nothing until last month when a friend gifted me four clones and two seeds , and I was thrust into the world of growing. I'm super paranoid because when I did try to grow a plant once my place got super robbed , not just the plant and light but like everything I owned at the time. So yeah it's been hard actually mostly dealin with the anxiety of a break in, and also of rising electric bill due to the indoor lights and venting and ac that I felt would all be nesecary to make a decent attempt. I have studied environmental science and sustainability in college and am trying to bring in an efficiency and sustainability geared grow philosophy.

So here goes everything:

4 clones - all fem obviously , 2 cheese (cloned 5/22) and 2 Afghan Kush ( 5/21) . When I first got them ~5/28, I had them just in indirect sunlight and also most likely overwatered them like multiple times the first week. But I had a 50 dollar coupon for eBay and so I bought a Viparspectra 450w ( someone correct me if I shouldn't say what brands I use or something ) full spectrum LED ( person I got the clones from said he used two of these in a 4x4 tent) .

I put it in my closet and surrounded my closet in reflective Mylar , I'd say the closet is close to a 32"x32x5' area. I transplanted the clones to 5 gallon buckets from a big home improvement store, and went to my local indoor gardening store, if allowed I'll shout them out for sure because the place is awesome and I think their staff were super helpful and actually didn't know a childhood family friend was working there and just showed me a super positive vibe on my growing adventure. Anyways,

I planted those 4 in 707 roots organic soil that they sold me on, and I had also bought a hydroponic setup ( a bit over ambitious in hindsight) that came with the flora series from GH so I'm going with those nutes since I already have them even tho probably better for hydro setups was told I can still use them just fine for soil.

So i think I started with just my veg switch on my light at first, and did 18/6 off as well thinking this would be safest and what I read everywhere. All these events happened before or by June 5th, by June 6th everything was in place .

I had also been gifted two auto seeds ( Purple haze {I think}) and decided to plant both of those by June 11th. Mostly incase the clones got messed up, and because I was really bored and have ADD and couldn't help myself. Did them with paper towel method and within 36 hrs both had sprout, thru them in well drained 707 solo cups and put them under a 100w cfl 2700k ( was the wrong spectrum 2700k is for flower right ? Also found really cheap led strip lights and decided to grab those as well.

Anyways growth was slow but only one clone didn't look well ( one AK had like yellow on the leaf, and I think I had heavy water or mineral in the water cuz I saw white buildup that scared me into thinking it was powdery mildew ) my temps did raise to 90+ a couple times for extended amount of time, and humidity was usually barely 30% for the first two weeks , these things suffered lol. But the AK showed like awesome signs of resiliency and really blew up tall. One was 7 inches when I got it and in two weeks was 16 inches and bushy and didn't seem too stretchy . The other AK had worse light and so did the cheese I think, so they kinda lacked and the cheese were small when I got them probably only 4.5/5 inches but even two weeks later were only 7.5/8 inches tall and didn't think that was promising . So I found some more coupons and deals, and stole my girlfriends credit card ( just kidding babe ;-) ) and made some more out of my budget purchases ! Hell ya!

Anyways I found a deal for 2 used HPS/MH hoods ( one was a batwing one a enclosed sun system++) a used 600watt digital dimmable ballast , two new bulbs and one used one, and gifted two more auto seeds, for $100. Seemed like reasonable to me so I did that, and I also won a auction on eBay for a valubox 4x4x7.5 tent for 50$ . Clearly I don't and didn't expect to be getting top gear, but the tent has been awesome so far, and both hoods work, the bulbs work, the ballast has worked for a month now, and the seeds were good, and the tent like really has been a great deal but I could just be trying to blow smoke up my own skirt. I also don't wear skirts , pm for more information ;-) .

So by 6/17 had the Mh 600watt setup in the tent, and moved the three bastard children of my LED heat box closer to the more spacious bed side growtent sleep time sweat box and possible radiation hazard . Still with me ? If anyone has read this far, bless your heart.

So I set that stuff up, AND THEN I went out and found a good deal ( any deal I make has to be good , like Danny Ainge) for some AC units , I got two for 50$ used of course but working from a nice white suburbian family that undervalues due to wealth and possibly kindness. Anyway, I sold one of those for 60$, and then bought and even bigger AC ( 15,000 btu frederich window unit ) my place is only like 1200 sq ft max, so this thing is like super over kill.

So I setup the tent and the closet , and compared results after a couple weeks. The Mh , once I got it figured out and moved it to within about 13inches of the plants tops has worked admirably and they have all shown awesome signs of growth. I sort of ran them pretty much 24/7 tho and didn't give them much of a break. Also because I probably overwatered them and found it was taking like 7daya or more sometimes between watering .

I've been all over the place , but this is a good start, will probably make a journal or something , but just wanted to let you all know what I was working with and trying to do over here, I've certainly had a lot of issues and still will, and I hope there are some active members or are willing to share some wisdom with a new grower . I actually already really appreciate this forum and other forums like it because I wouldn't have gotten this far or have had decent progress so far if I didn't read everything I know basically from these forums. It's an awesome resource , and I think it will only improve as we add information to the system . This isn't just good for weed growing you know, I've been thinkin maybe this is the future of space farming too, and we are all on the front lines of learning how to grow quickly , or efficiently or awesomely , maybe the government wants us to grow, and wants us to learn how to be better stewards of our world and build better sustainable practices for using energy and creating and maintain agriculture . Maybe I'm just high, but always good to have some ambitions as a group, I know this place has been here a long time, I anticipate it has grown and grown over the years and is near the time when it actually begins to really be mainstream, and we are still on the front lines here.

Hey poopypal, if you can post a pic, you may get some good tips from the more experienced growers, good luck with your grow....
Webuilt LED Tent "Perpetual" Summer Grow 2020

I guess I need to ask... how do I upload pictures ?

Poopypal said:
I guess I need to ask... how do I upload pictures ?
Click to expand... 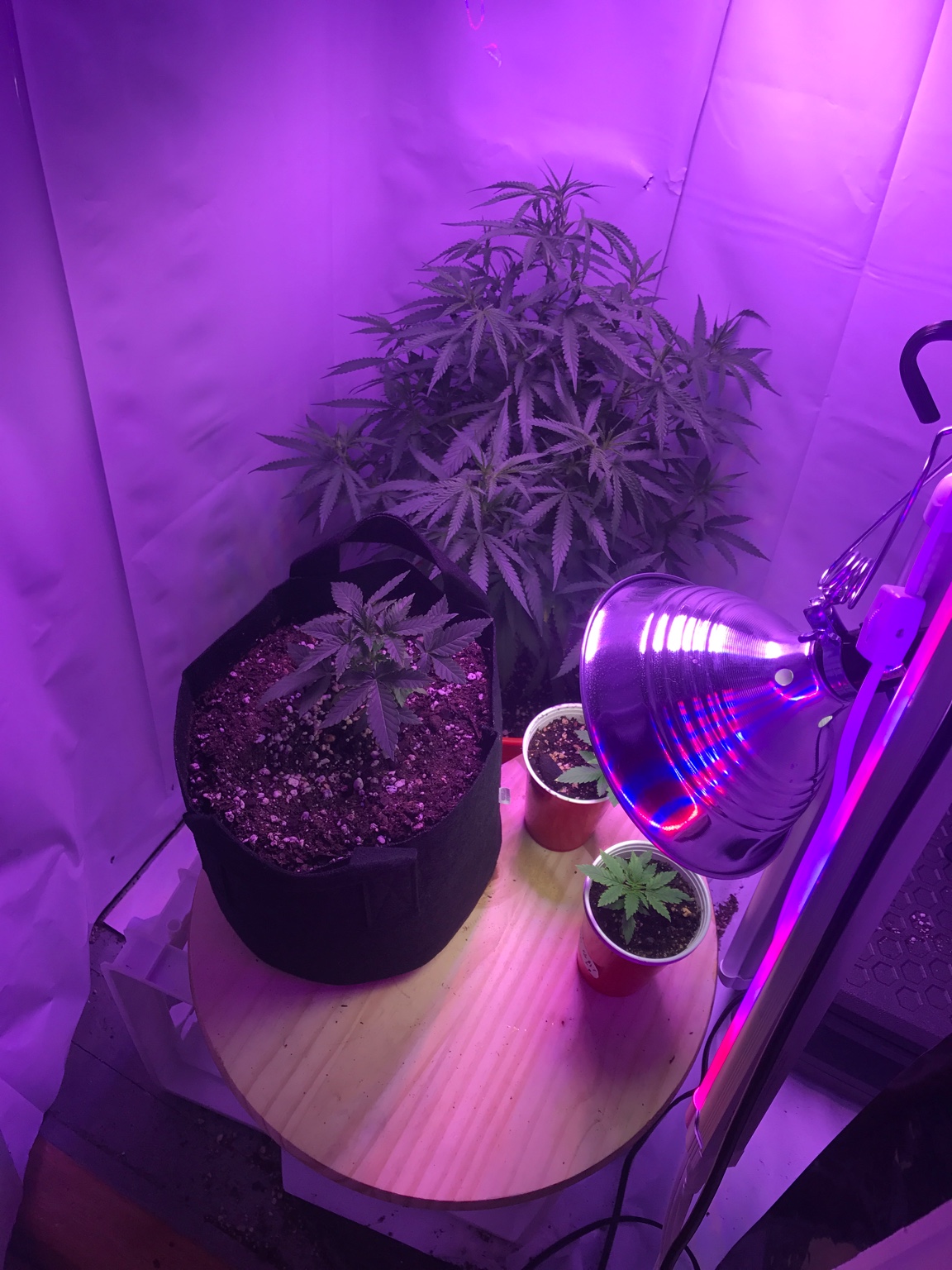 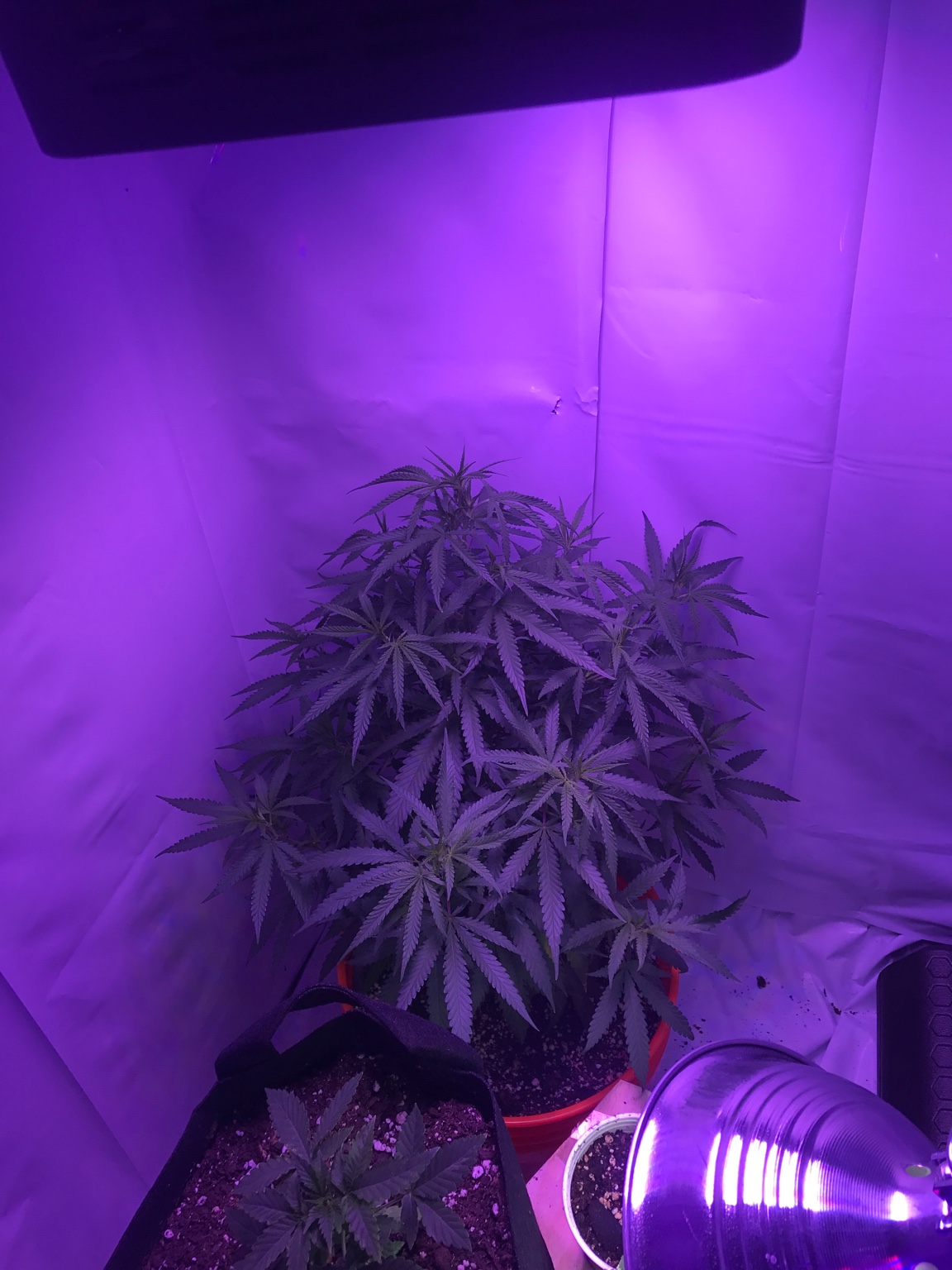 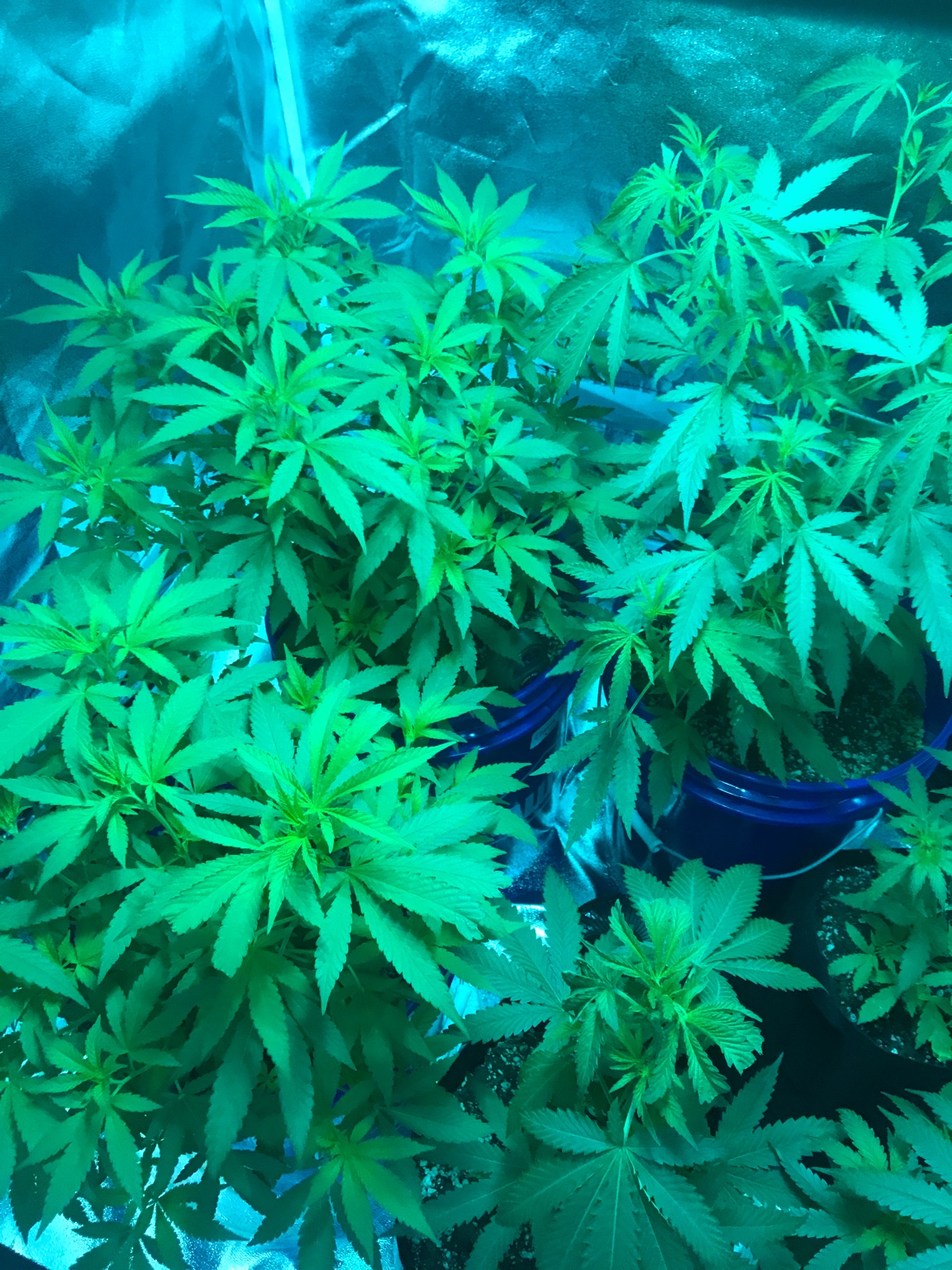 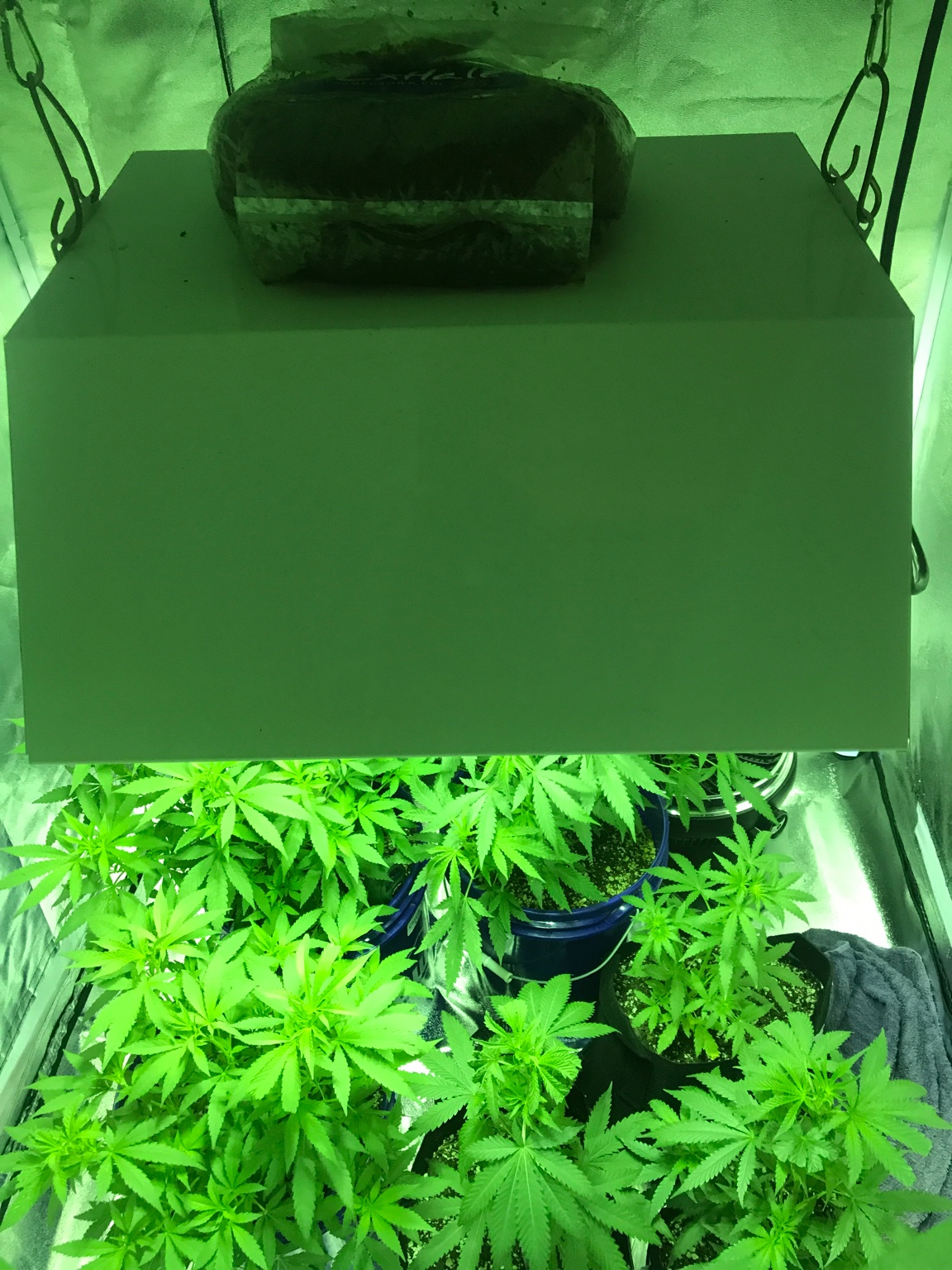 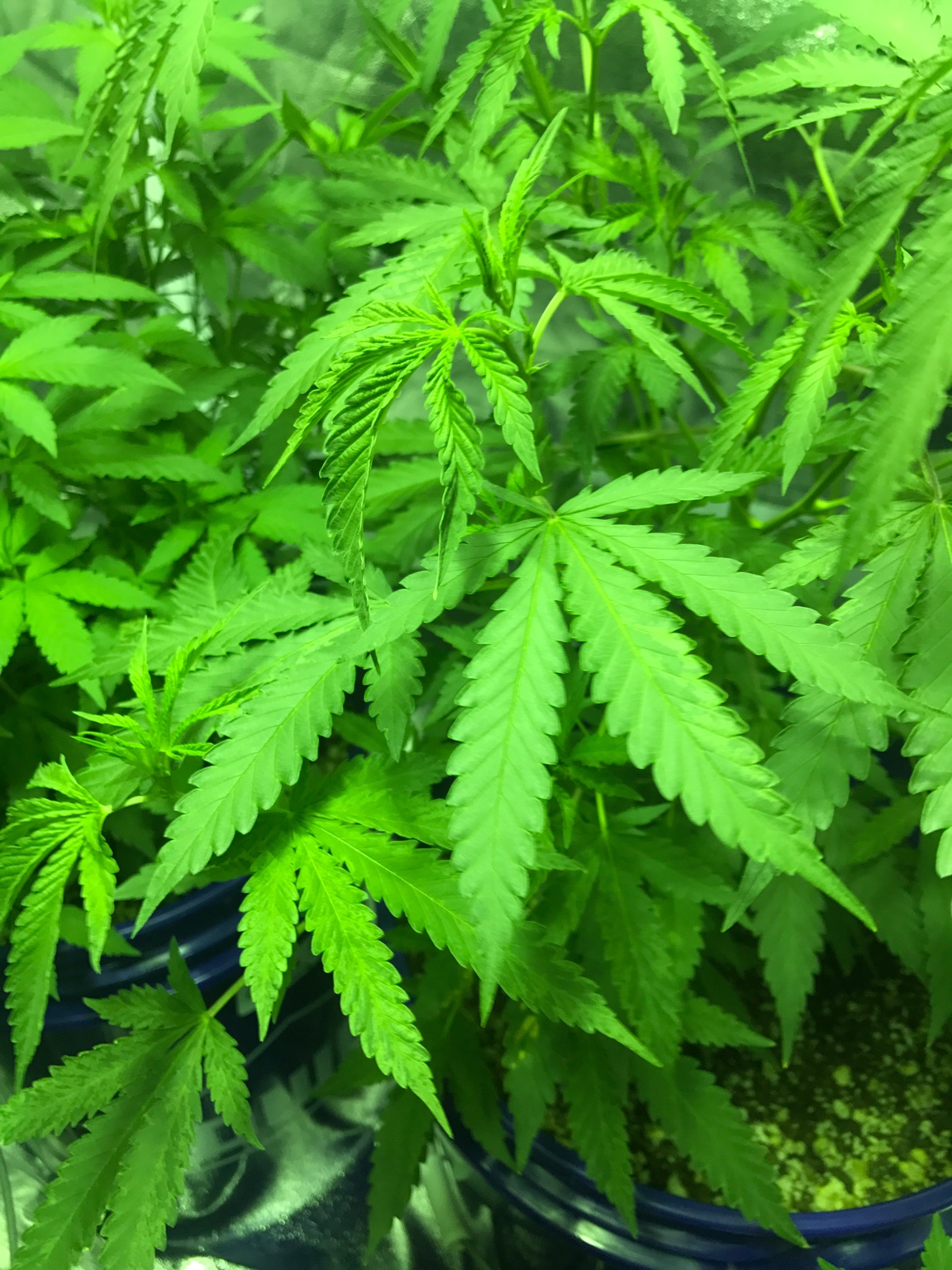 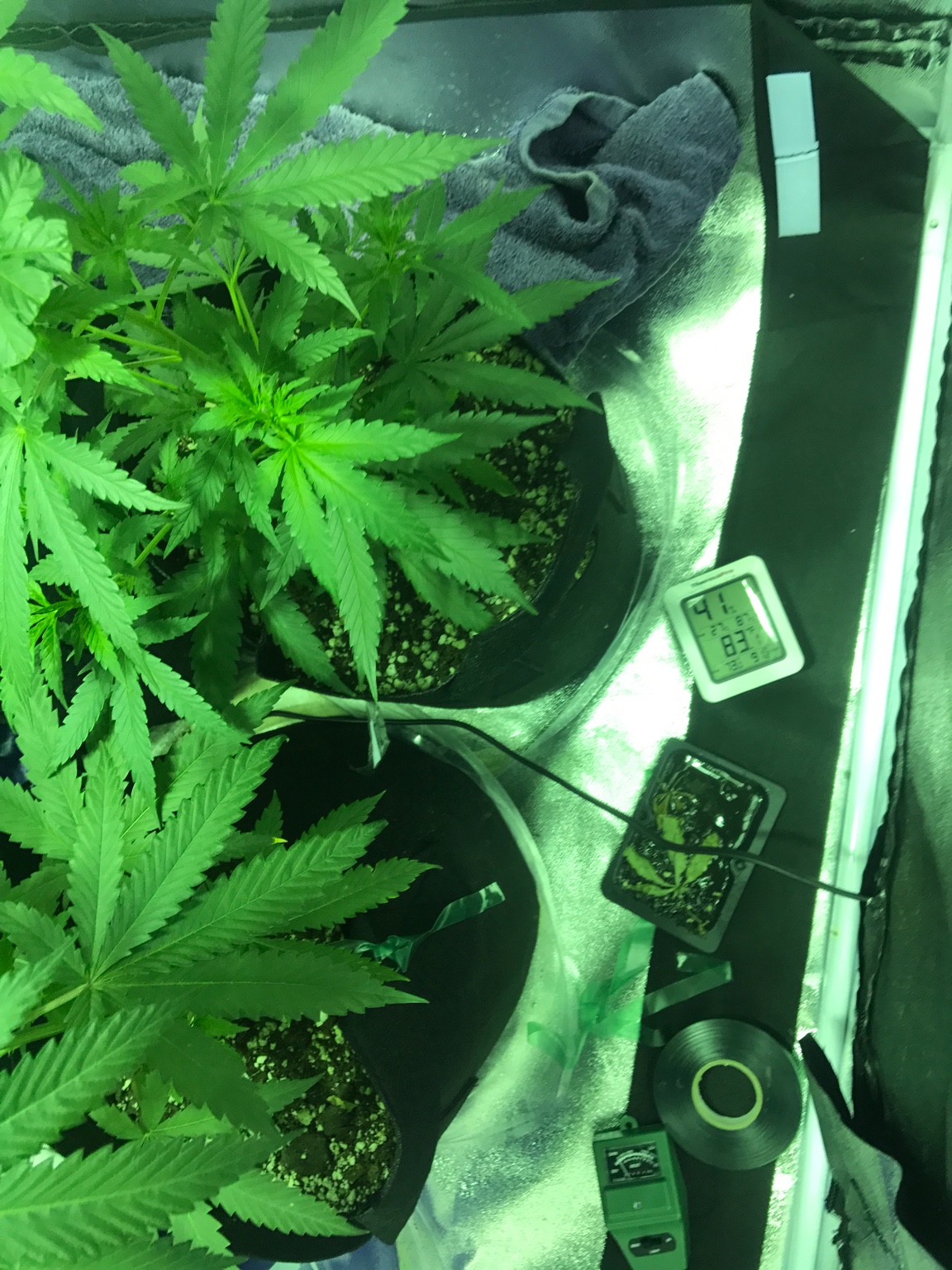 They are really only like 14 in max right now for the cheese and 18in for one AK... I just like topped and fimmed or something like it 5 days ago, waiting to flower for about another week, want to water and fix my cooking /ventilation system and see if I can make I DIY co2 and try to block off the door on the room see if I can even marginally increase the co2, but I'm indoors and don't wanna overdo it as the room isn't air tight or anything.. have some leaf yellowing and some browning and fungus gnats as well.. so still have some things to fix here before I head to flower if anyone can suggest anything. The yellow leaves are mostly older leaves and lower down so I'm not so concerned . The gnats and brown on just one leaf on one plant is worrisome to me and not exactly sure the cause . I'm getting sticky traps and going to spray with some soapy water , soapy water won't really hurt the plant right ? I've read hydrogen peroxide works too but don't have any ATM

What's up poopypal! Nice grow so far. Check out no e and what you think . it's a cfl indoor in 4sqft box. Happy growing 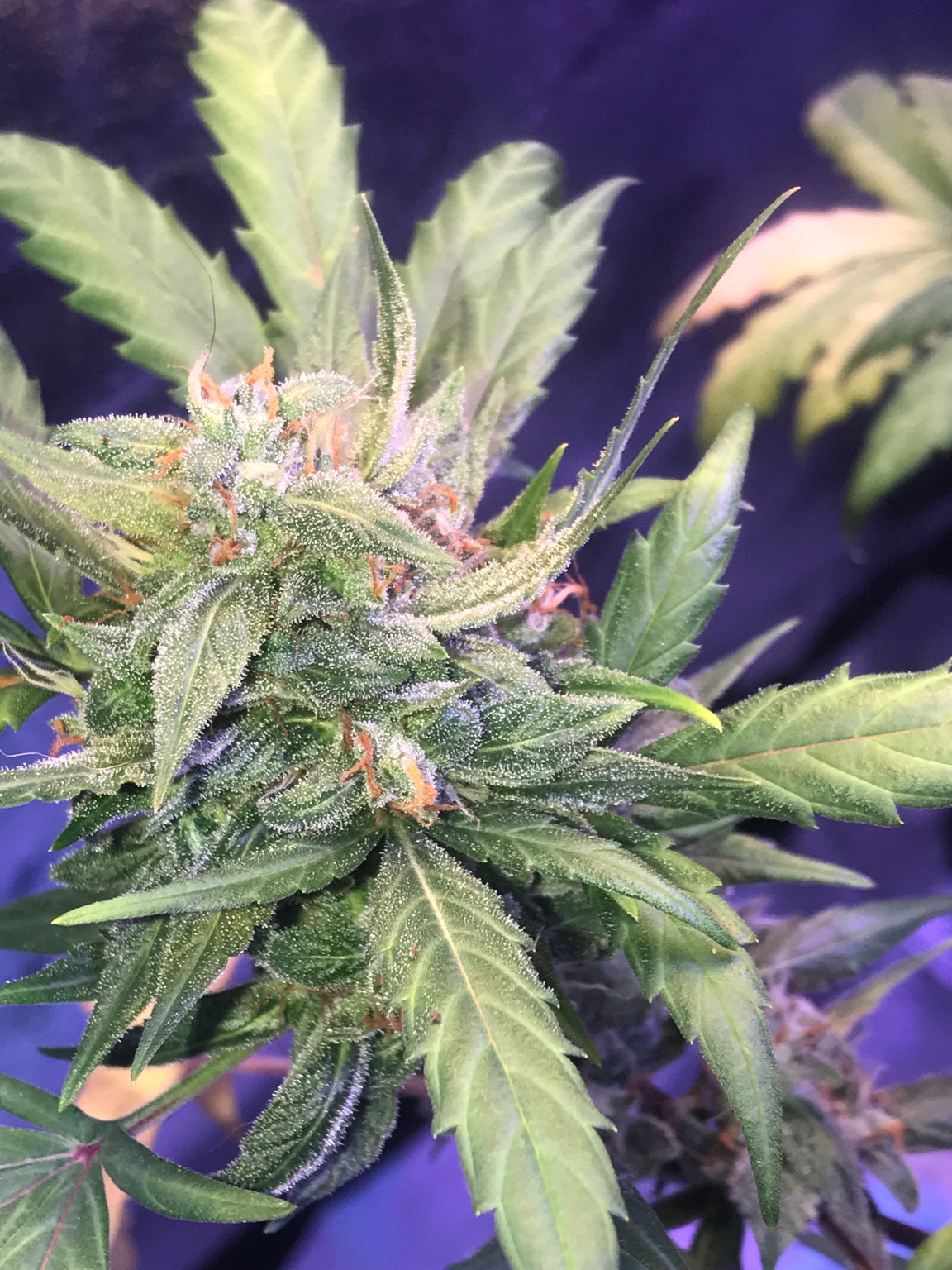 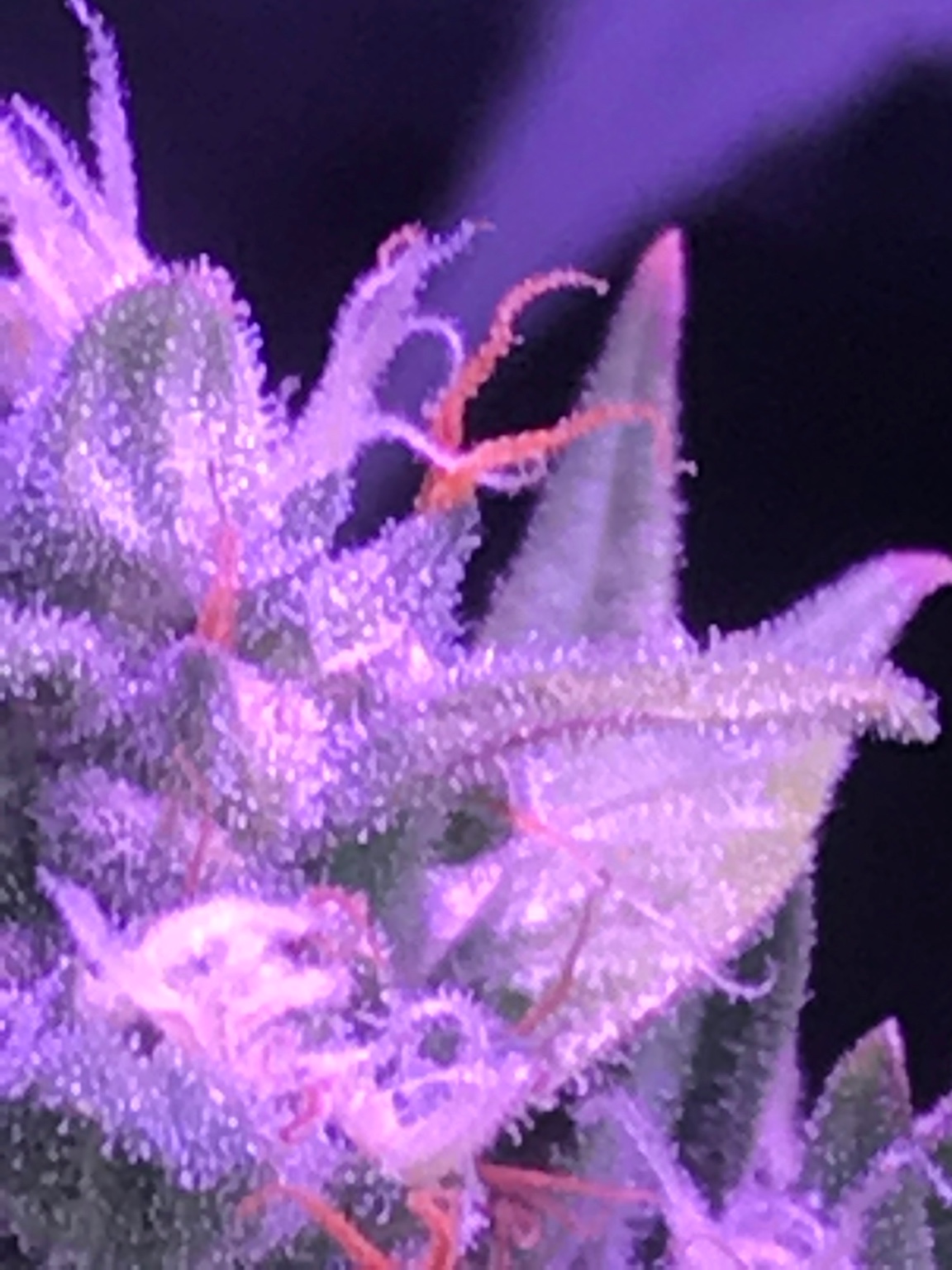 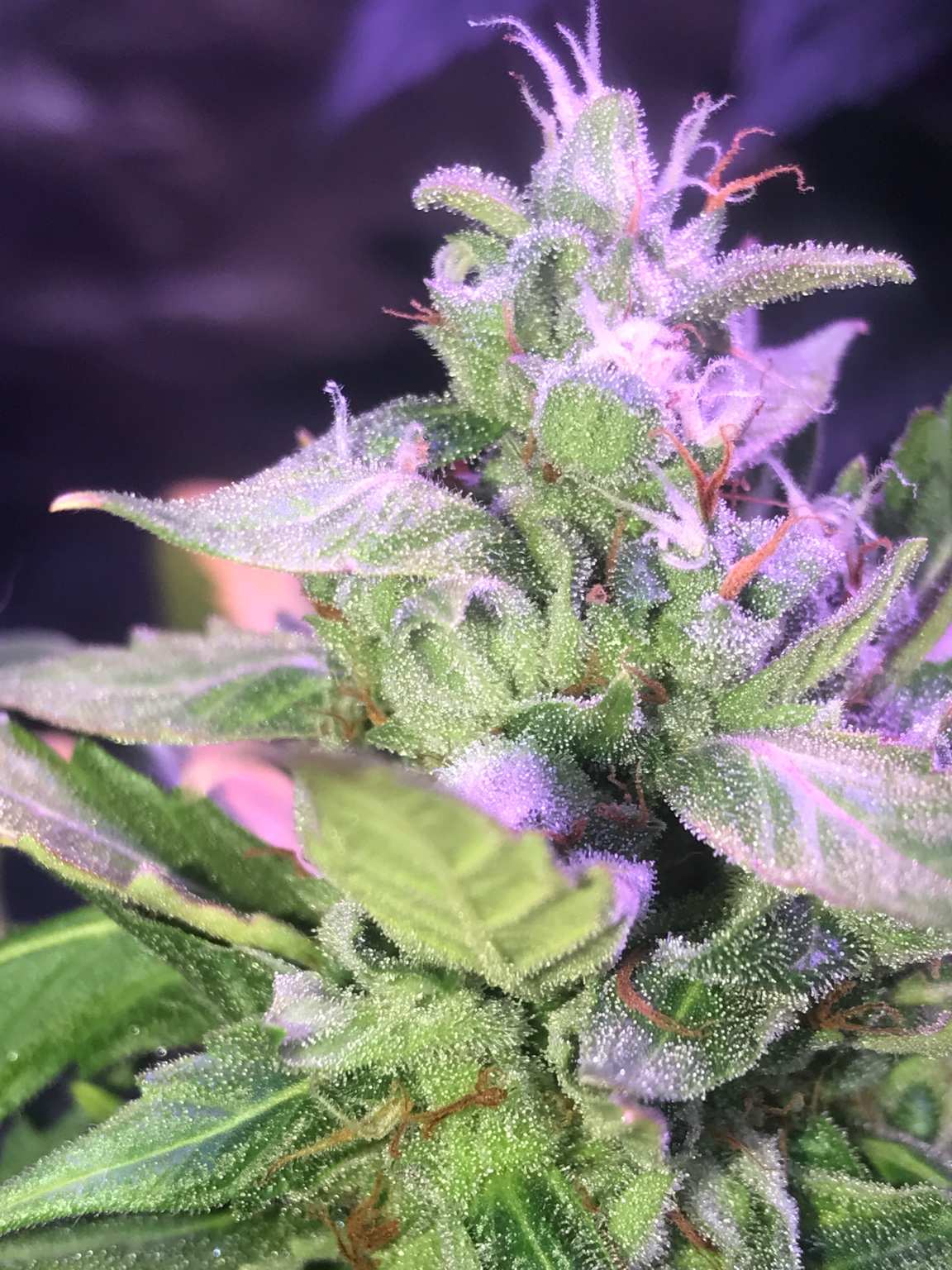 Hey Poopypal! I'm a Masshole also celebrating question 4 and more strains than this old fart ever imagined. I grow outdoors. its a freakin weed, and I have a private backyard with conservation land behind me. Some of my girls are taller than me and budding real nice. Can't wait to harvest.

Can anyone tell me how those trichomes look, like are the clear or cloudy, I sort of have bad eyes and don't exactly know what to look for being my first grow..
You must log in or register to reply here.

D
Actually not my first time