He may sing the blues for a living, but when it comes to his personal life, John Popper couldn't be happier.

The Blues Traveler frontman has been granted a conditional discharge of his pot case in Washington state.

The singer and harmonica virtuoso was popped last March for possession of marijuana and drug paraphernalia after he and a friend were caught speeding. Per the terms of his deal with the prosecutor the misdemeanor will be expunged from his record if he manages to stay out of trouble for a year.

Adams County Deputy Prosecutor Ted Sams said that Popper was not given any special treatment and received a typical sentence, which also includes eight hours of classroom drug counseling. Popper, 40, won't be required to submit to random drug testing.

Popper agreed to the terms in April, Sams said. News of the sentence was first reported by the Spokesman-Review of Spokane. There was no comment Thursday from his publicist or attorney.

The Grammy winner was riding shotgun in his Mercedes SUV and his pal Brian Gourgeois, 34, was behind the wheel when they were pulled over by state troopers for going 111 mph on Interstate 90 near Ritzville.

The troopers caught a whiff of marijuana and, with the aid of a dog, searched the vehicle. They turned up a cache of weapons—four rifles, nine handguns, a switchblade, Taser and night-vision goggles—along with emergency headlights, a siren and a public address system attached to the vehicle. A baggie of marijuana and a pipe were stashed in secret compartments.

Officers seized the SUV and booked Popper and Gourgeois at Adams County Jail on misdemeanor charges of possessing a controlled substance and drug paraphernalia. Gourgeois was also charged with reckless driving.

According to Popper's manager, the singer was on his way back to his western Washington home after recording an acoustic album of Blues Traveler hits in Austin, Texas. Popper apparently frequents shooting ranges while on the road.

In a press release, the Washington State Patrol said that Popper told troopers he had installed the siren and other add-ons to the vehicle in the event of a natural disaster because he "didn't want to be left behind." The musician also said that he was an avid weapons collector, per the release, and he had valid permits for each of the guns.

Popper also faced an additional weapons for a knife and brass knuckles stowed in the glove compartment; however, prosecutors dropped that count when he agreed to turn them in to authorities.

Gourgeois is facing a similar sentence as Popper for the drug count. However, the status of his reckless-driving chage was not immediately clear.

Popper is currently on the road with Blues Traveler. He'll also take time out to play a few gigs with the John Popper Project, a side band he formed with DJ Logic. 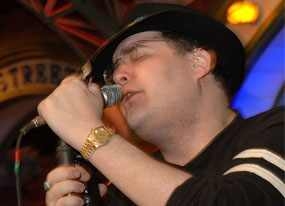 I aleays thought he was one of the coolest folks in rock & roll, but I gotta say the gun/brass knuckle thing kind of shocked me.

R
47% Of British Public Support The Legalisation Of Cannabis