When one of Cliff Luther's customers asked for a pen to pay for his burger and fries by cheque, Luther wasn't expecting that cheque to be made out for $10,000.

And he wasn't expecting it to be made by well-known B.C. marijuana-rights activist Bob Erb.

The result, according to Erb, was overwhelmed tears.

For Luther, it was a restoration in human nature.

It all started last week, when Erb and his girlfriend Jenny were driving from their home in Terrace, B.C., to Yellow Grass, for the interment of Erb's father's ashes in the family plot.

Looking for a quick bite to eat, they stopped by Luther's Chamberlain restaurant, the Old West Express.

With Erb decked out in his usual legalize marijuana gear, the pair got to chatting when Luther asked about the pin on Erb's jacket.

"He was telling me how he thinks legalizing marijuana is the way to go, you know, which was interesting," Luther said Monday.

"One thing came to another, and he's from B.C. and I was telling him how my 25-year-old daughter is out there right now and has just been diagnosed with cancer."

Speaking from his home on Wednesday, Erb admitted that resonated with him a little, having lost his 26-year-old son four-and-a-half years ago.

"He was emotional about it, just as any parent would be in that kind of situation," Erb said.

Erb was also stuck by Luther's "open-mindedness, and how he was just looking to talk and to learn about things from another perspective."

And so, a few days later on his drive back home, Erb stopped in again and ordered another meal.

"He asked for a pen and said 'Here, you can just take the bill out of that,'" Luther said, still sounding a little shell-shocked.

Luther hasn't cashed the cheque yet, but he needn't be concerned about it bouncing; Erb made headlines after winning a $25-million lotto jackpot in November and donating a $1-million chunk of that to 420 Day, which promotes the legalization of marijuana.

"It certainly lightens the load for us," Luther said.

"You kind of think, 'Why would someone do that for somebody they don't even know?'

"It's really lifted my spirits. There are just some really caring people out there."

While legalizing pot isn't something on Luther's own agenda, he said Erb "seems like a pretty good fellow."

It seems the feeling is mutual. "Just everyone who came in, you know, he had a big old smile and he was a really genuine kind of guy," Erb said.

Erb laughs when asked about Luther's reaction to the $10,000 cheque, and says Luther was "so overwhelmed, so befuddled by it that I ended up having to flip my own burger because he was real emotional."

"While we were there a ... couple came in with four kids and he gave all the kids ice cream," he said.

"Even with everything on his mind, he greeted everyone with a smile. I don't think you'd ever find anyone as down-to-earth as Cliff Luther." 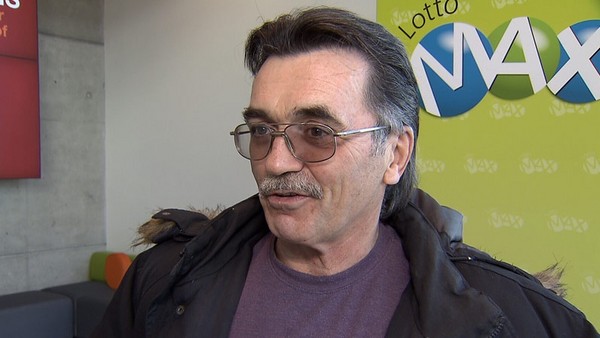