Incomplete paperwork. Expired licenses. Too many marijuana plants for the number of patients registered with a grower.

Those have been the major issues in policing the burgeoning medical marijuana industry in Colorado Springs in the years since a U.S. Justice Department memo all but removed the threat of federal prosecution.

That's about to change in a few days, when state regulators step into the void created by the Justice Department memo and begin enforcing a slew of new regulations Friday amid suspicions that homegrown medicinal marijuana isn't staying at home.

Investigators have uncovered evidence that marijuana grown under the guise of supplying local dispensaries and patients has been shipped to at least five other states for sale on the black market, said Sgt. Brett Poole, who oversees Colorado Springs police detectives regulating the industry.

Authorities in those states intercepted the packages and contacted detectives in Colorado Springs, where they originated, Poole said. He characterized the shipment sent to Arizona as "high grade medical marijuana."

The illegal shipments up the ante in what had largely been waged as a guerrilla war, with police occasionally raiding grow operations they said weren't following the law and the growers claiming police were trying to shut them down through harassment.

"We want the legal businesses to do what they're supposed to do," said Sgt. Darrin Abbink, Colorado Springs police spokesman. "But there are people who are going to try to use it to do illegal activities."

Police officials caution that the exact relationship between state and local authorities has yet to be finalized.

But, there's no doubt police and state regulators will be kept busy ensuring compliance with licensing rules and investigating reports of illegal growing operations.

Since 2010, VNI detectives have fielded more than a dozen complaints a month regarding medical marijuana, Poole said.

The constant stream of calls prompted police to ask City Council last fall for $331,000 to fund a pot cop task force this year with three detectives and a code enforcement officer.

The department got half of what it asked for – two detectives, Poole said.

He's since assigned detectives from elsewhere in VNI to help the two pot cops, who have been investigating medicinal marijuana being sold illegally out of state, as well as houses being "completely modified" to grow substantial amounts of marijuana, Poole said.

"There's two parts to the industry," Poole said. "One part is based on the state model for dispensaries and commercial grows. The other part of the industry is trying to grow under the guise of the caregiver model."

Poole would not say whether anyone has been arrested in connection with the out-of-state marijuana shipments, and declined to offer details about the operations, saying the investigation is ongoing.

He also wouldn't say how many "grow houses," police have busted or how much marijuana was found at each site.

While police focus more on the illegal sale of marijuana, a host of investigators will be dispatched in the coming month to check grow licenses, zoning requirements and other requirements spelled out in a 73-page booklet of state-imposed rules.

The team is paid for by thousands of dollars in fees marijuana business owners have had to pay recently, which have allowed the state to hire one investigator per every 10 medical marijuana centers, Postlethwait said.

The department plans to open the medical marijuana enforcement office in Colorado Springs sometime in July. An exact date hasn't been set because no lease had been signed, said Postlethwait.

He welcomes the regulations as they give his business a sense of legitimacy. But it's cost him more than $10,000 in fees and security-system purchases, putting a strain on his business. And the mounds of paperwork, he said, have been exhausting.

He expects his business to be 80 percent compliant by then.

"They (regulatory officials) said as long as they see we're attempting to be compliant, they'll try to work with us," Gulczymski said. "They're still playing catch-up, for sure."

The new regulations, though still a few days away from going into effect, have already thinned the ranks of medical marijuana businesses.

Poole said the city has received word from the owners of some medical marijuana centers and grow sites that they will be closing due to the regulations.

"The new regulations are very structured and (in some cases) will be difficult for most of the industry to follow," Poole wrote in an email to The Gazette. 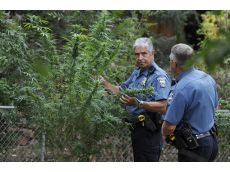 Pot Cops A Possible Side Effect Of Medical Marijuana