So, I'm working out a design for a superhero chick, the Pot Head Girl. I am still thinking about the custume. I like the idea of pot leaves covering her nipples. I think she needs gloves and boots.

This was just a sketch to get the feel of the character. 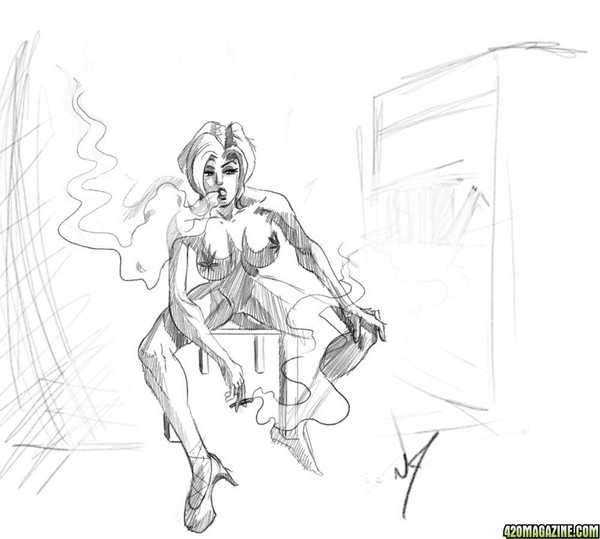 Growing a huge Critical in Coco with LEDs - Live Grow

Hey! --- Make your own bottled nutrients from raw salts

Nice sketch! For gloves & boots I'd design something that incorporates different parts of cannabis plant. Since she's a superhero she probably has some awesome powers too, for example: she can breathe out a cloud of smoke that instantly makes everybody nice & friendly.

Why is marijuana against the law? It grows naturally upon our planet. Doesn't the idea of making nature against the law seem to you a bit . . . unnatural? Bill Hicks

Good ideas. I hope I can find the time to keep working on this character.
Neil's LEDs and Nutrients
www.perfectsunled.com
​
Formally known as LEDRF here at 420

Growing a huge Critical in Coco with LEDs - Live Grow

Hey! --- Make your own bottled nutrients from raw salts

Maybe you could make a Mascott for the site?

Former aspiring comic book artist and long time reader and collector so take that for the grain of salt it is worth.

You definitely have skills. I have no real criticisms, save to say that she does need more 'fleshing out'. It is interesting that you did not go the typical route of making her a 'hippie-with-muscles' as I have seen from so many attempting to create a MJ-themed superhero(ine).
Having said that, she does need some details that let the viewer know what she is about, beyond having pot leaves over her nipples and one thing I would immediately identify would be better footwear. Those high heels are a pesky staple of female superheroes to be sure but I just think a marijuana-themed superhero(ine) would have better sense, even while being humorous. Not saying moccasins or Birkenstocks are the way to go but at least some ratty, comfortable looking sneakers (perhaps a Converse type high top with a pot leaf in place of the usual Chuck Connor circular label?).
As for the pot-leaf nipples, I would replace this with a singular, stylized pot leaf for a few reasons: 1) That 'Ganja Girl'' is already widely known for the 'leaf over each nipple' look. and 2) You can do something more visually striking by playing with the size of the pot leaf and it's placement. For example, imagine Captain Canuck's red and white maple leaf flag motif redone as a green and white pot-leaf flag? or something along the lines of Green Lantern's solid black and green but with a central pot leaf emblem in the center of the torso.

There are a million other things you can do but you get my point I am sure.
S

Woodpipe said:
Nice sketch! For gloves & boots I'd design something that incorporates different parts of cannabis plant. Since she's a superhero she probably has some awesome powers too, for example: she can breathe out a cloud of smoke that instantly makes everybody nice & friendly.

Exactly! I was thinking of things like 'Her hemp cape blocks various types of electronic spying.' or 'Her hemp gloves giver her amazing curative powers to 'lay on (resin-saturated)hands' and heal certain ailments. Maybe her rogues' gallery of villains includes 'Doctor Necrosis', 'Nute-Burn' and of course 'Spider-Mite'.