Every month, Elliott Klug or one of his business partners walks into the Colorado Revenue Department with a messenger bag holding thousands of dollars in cash and watches as state employees start counting.

Klug, co-founder of PinkHouse Blooms LLC, a chain of five medical-marijuana dispensaries in Denver, has to pay his sales taxes in cash because federal law bars banks from offering accounts to pot shops, even as Colorado allows and taxes them.

"It highlights the awkward situation we've been placed in," Klug, 36, said by telephone. "We are paying taxes, but despite our best efforts to be good citizens, we're still paying in cash."

Colorado (STOCO1) is among 18 states that allow the medical use of marijuana, and 11 that permit sales through dispensaries like Klug's. But federal law labels the drug a controlled substance and requires banks to report related transactions as suspicious activity. The inconsistency creates a gray area for dispensary operators, who have to choose between operating as a cash-only business, susceptible to robbery, or finding creative ways to open checking accounts and accept credit and debit cards.

"They're encouraging cash operations, which are a threat to public safety, and much more difficult to track and audit," Aaron Smith, executive director of the Washington-based National Cannabis Industry Association, said by telephone, referring to the conflicting rules.

Dispensaries pay federal, state and local taxes, in addition to state and local licensing fees "that often run up to tens of thousands of dollars annually" and many government agencies don't accept cash, Smith said.

"We're just looking for a solution where we can bank legitimately like any other industry," Smith said. Wherever you stand on the marijuana issue, it serves everybody's interest to have banking access."

Klug said that until 2011 he had checking accounts with Wells Fargo & Co. (WFC), which "welcomed us with open arms and then changed their minds."

San Francisco-based Wells Fargo (WFC), the fourth-largest U.S. bank by assets, "opted not to bank these businesses in view of the complex and inconsistent legal environment," Jim Seitz, a spokesman, said by e-mail. The bank conducts regular internal reviews and "if we identify a situation in which a policy is not being followed correctly, we act accordingly," he said.

Klug now uses cash to pay about $45,000 a year in licensing fees to the state and remits about $35,000 a month in sales taxes to Denver and the state.

Some dispensaries get around the rules by setting up a shell business with an innocent-sounding name and not divulging that it's tied to medical marijuana, said Dale Gieringer, director of the California office of the National Organization for the Reform of Marijuana Laws, a pro-pot group. California was the first state to legalize medical-marijuana use in 1996.

"As long as the bank doesn't find out, you should be safe," Gieringer said by telephone. "Or you can use a family account or a personal account. Some people have another business on the side and they use that account."

If the subterfuge is discovered, "the bank terminates services with no explanation," Gieringer said.
Bank officials say they are complying with federal law.

At Wells Fargo, "our policy of not banking marijuana dispensaries is based on applicable federal laws and our own assessment of our responsibility," said Seitz, the bank's spokesman.

Similarly, American Express Co. (AXP), the biggest U.S. credit-card issuer by customer purchases, "has made a decision to not allow card acceptance for medical marijuana," Sanette Chao, a spokeswoman for the New York-based company, said by e-mail. "It is our policy to adhere to federal law in such matters."
Some financial institutions look the other way.

"There are some locally owned banks that medical marijuana companies are utilizing," Daria Serna, a spokeswoman for the Colorado Revenue Department, said by e-mail.

Banks risk losing their deposit insurance or their federal charter if they violate the law, said Robert Rowe, senior counsel at the American Bankers Association, a Washington-based industry trade group.

Under federal law aimed at preventing money laundering, "banks are supposed to know their customers," Rowe said by telephone. "One of the expectations is banks will do some checking into their customer and what kind of business they are doing."

The Federal Deposit Insurance Corp., which insures customer deposits at U.S. banks and regulates some state-chartered banks, "has advised regional and field staff that banks should file Suspicious Activity Reports on transactions and deposits related to proceeds from the sale of controlled substances," Greg Hernandez, a spokesman for the Washington-based agency, said by e-mail.

"It is the FDIC's expectation that banks conduct prudent due diligence regarding their customers and should know and understand the types of businesses the customers operate," Hernandez said. "Knowing that cashflow comes from an illegal activity should raise concerns of bank management, who is expected to evaluate the account relationship to determine whether the account should be maintained or terminated."

At The Joint, a Seattle-based medical-marijuana dispensary, founder Shy Sadis said he has an account with "one of the top banks in the United States" and has an automated-teller machine on site for his customers to get cash.

"We do payroll for all of our employees," Sadis, 40, said by telephone. "It's crucial to have a bank account. If we didn't, we would be underground, dealing with cash and not paying our taxes."

In Washington (STOWA1), where voters last year legalized recreational use of marijuana, the Liquor Control Board is designing a regulatory framework for the new industry that includes a 25 percent tax on producers, processors and retailers.

Businesses paying in cash would present a security issue, said Brian Smith, a spokesman for the board.
"We'll need to be prepared to accept potentially large amounts of cash," he said. "Do we suddenly have to have armored-truck service? That's a potential."

Scott Jarvis, director of Washington's Financial Institutions Department, took the issue to regulators at the FDIC and the Federal Reserve in March.

"The purpose was to let my federal counterparts know that we had passed the initiative, that the state was moving forward in fulfilling the will of the people and that when push comes to shove, money has to go somewhere into the banking system," Jarvis said. "And to alert them that at some point somebody will have to make some decisions."

"We have a lot of banking and credit-union folks that are interested in providing banking services to this industry," Jarvis said.

"I think we'll have some resolution either through policy at the federal level or through the court system," Jarvis said. "Also, Congress could act."

U.S. Representative Jared Polis, a Colorado Democrat, in February introduced a bill to remove marijuana from a drug classification known as Schedule I, or most dangerous, where it is listed alongside heroin.
"We want to make sure they have access to the same type of banking facilities as other businesses," Polis, who said he doesn't smoke pot, said by telephone.

States are also looking to U.S. Attorney General Eric Holder, who said in March that the Justice Department is considering a response to voter approval of recreational marijuana use in Washington and Colorado.

In both states, anyone 21 and older can legally possess as much as 1 ounce (28 grams) of marijuana for recreational use. Nonmedical retail sales remain illegal until the new rules are in place.

In Colorado, lawmakers this week approved bills to regulate and tax recreational pot purchases. A task force on implementing the law recommended that the legislature consider all alternatives to help businesses access banking services.

"Efforts are needed either to secure a federal exemption for legal marijuana businesses in Colorado to be able to legally bank with federally insured banks, credit unions and other financial institutions, or to create a local financial institution that is not subject to federal regulation," the task force said in a report.

Once recreational-marijuana retailers open shop, there will be some small banks that will accept their business either publicly or through "willful blindness," said Robert McVay, a lawyer with Seattle-based Harris & Moure PLLC, which has helped medical-marijuana dispensaries open in the state.

"The business is there and whoever steps into it is going to do well," McVay said. 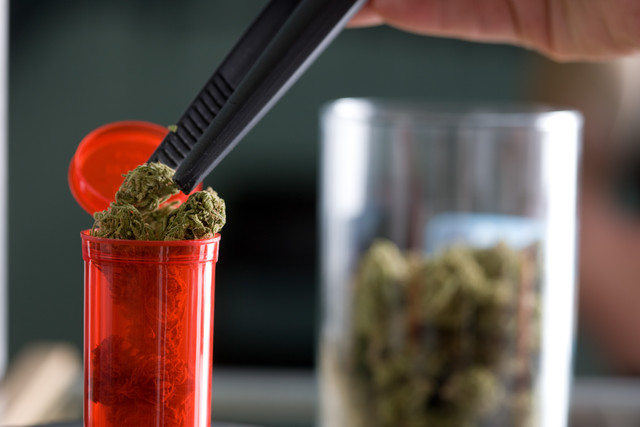