Pot Shops Shunned By Banks Haul In The Cash

The newly budding marijuana industry still carries some vestiges of a back-alley trade as conflicting laws and hazy regulatory guidance have left legal pot-shop proprietors dazed, confused and flush with cash, particularly in Washington State and Colorado, where recreational marijuana sales by retailers began this year. Those businesses deal in what remains a controlled substance under federal law, even though medical use of the drug is legal in 23 states and the District of Columbia, a trend that started in California in 1996. The fog of conflicting statutes has kept banking services out of reach for dispensary operators and retailers, even amid a buzz about booming demand for weed: Taxable pot transactions may near $1 billion over the next 12 months in Colorado alone.

A cautious cheer went up from some merchants in February, when the U.S. Treasury's Financial Crimes Enforcement Network (FinCEN) issued "guidance that clarifies customer due diligence expectations and reporting requirements" for banks that deal with marijuana businesses. Media reports hailed it as giving financial institutions a green light to provide normal services to pot shops that opened in Colorado in January and this month in Washington. Yet the result has been anything but normal. "The media was saying it was a green light,'' said Jenifer Waller, a Colorado Bankers Association senior vice president. "We said, 'No, it continues to be a very solid red light; not even yellow, to be honest.'"

FinCEN's memo "just set up this compliance scheme that's impossible to follow and reiterated that you could still be prosecuted even if you're doing everything under the memo," Waller said. Banks have to file suspicious activity reports on all marijuana-related transactions — the same forms used to flag potential criminal money laundering. Because marijuana remains an illegal drug under U.S. law, federally regulated banks must treat money from those operations as ill-gotten gains, according to the American Bankers Association. Financial institutions working with marijuana merchants and dispensaries also risk facing U.S. criminal charges of aiding and abetting illegal enterprises.

The result has been a rocky road for some pot shops in Colorado. "Banks didn't know that this wasn't something they were going to be allowed to do, so they went ahead and did it," said Elliott Klug, co-founder of the PinkHouse Blooms marijuana dispensary chain in Denver and Colorado Springs. "We were fully functional and then they got a phone call [from the Drug Enforcement Administration] and the bank had to shut down our accounts."

One upshot: Cash remains king for Klug's business, a situation that heightens the risk level. He said one bank has approached him about providing services, but insisted that only armored cars could transport his cash and his products — and that wouldn't be covered by the proposed $1,500 monthly service fee. "Not everyone can afford to have armored cars, not everyone can afford armed guards," Klug said. "It's just something that we need to get changed." Stuck without a bank to stash gobs of greenbacks, Klug said security remains a concern. One result: He employs "a number of people with concealed-carry permits."

Klug's probably not alone. The Denver Post reported that Colorado figures marijuana sales may near $1 billion this fiscal year, based on revenue estimates. The primary difficulty of being unbanked is the mountains of paperwork created as he attempts to keep good records of all-cash transactions, Klug said. Adding financial pain, he said the U.S. Internal Revenue Service hit him with a 10% surcharge for paying some taxes with cash.

The Treasury's enforcement priorities are to keep marijuana products away from children and pot proceeds out of criminal hands. FinCEN's guidance also lists keeping the drug from being transported to other states and preventing its possession, use or cultivation on federal lands. Asking banks to assist in meeting these goals isn't reasonable, according to Waller, of the state banking group. "As an financial institution you have no way of knowing where an end product from one of your customers is being used," she said. "It set up a know-your-customer's-customer type of compliance that is all but impossible to do."

For unbanked marijuana businesses, the news only got worse in April when U.S. Senators Chuck Grassley, an Iowa Republican, and Dianne Feinstein, a California Democrat, sent a letter to FinCEN Director Jennifer Shasky Calvery, complaining that its guidance suggested enforcement discretion would facilitate illegal activity and help move ill-gotten gains into the nation's financial system, which "turns FinCEN's mission on its head." The senators, who lead the Senate's narcotics control caucus, said banks that followed the guidance could be exposed to civil or criminal liability.

FinCEN responded in May by, in Waller's words, "watering down" its February guidance. Grassley said the agency's follow up was to "deny the stated purpose of that guidance." All of which has left pot merchants about where they started: Shut out. "Essentially all marijuana businesses are really unable to do business with any of the major national-level banks and credit-card processors," said Erik Altieri, communications director for the National Organization for the Reform of Marijuana Laws (NORML). FinCEN's guidance was "not really enough to convince the large financial institutions to take a bite of the apple."

Financial institutions aren't going to wade into the marijuana business until they're confident they won't face legal action if they do, Altieri and Waller say. They point to legislation that could help, such as the Marijuana Businesses Access to Banking Act introduced last year by U.S. Representatives Denny Heck of Washington and Ed Perlmutter of Colorado, both Democrats. The measure, which would prohibit regulators and law enforcement from penalizing banks for providing services to pot shops, hasn't advanced. The drug's treatment under federal law may have to change before marijuana businesses can satisfy their craving for checkbooks and access to credit card networks. Anything else may lack the potency to pass fiduciary muster. 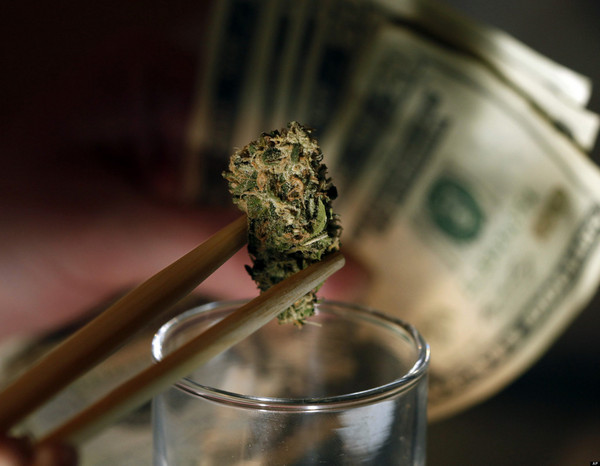 What about regional banks! Are their hands tied as well when it comes to dealing with cannabusinesses that has large amounts of cash on hand?