Protesters get early start on lighting up

The air around the grounds of the Manitoba legislature is thick with the smell of marijuana, as advocates in favour of looser drug laws gather for what has become a yearly event.

Several hundred people are on the grounds, lighting up, as part of a demonstration in many cities.

The actual lighting up for the event is supposed to happen at 4:20 p.m.

One participant, from the Marijuana Party, told CBC News he advocates the use of the drug for health reasons and argues legalizing pot would reduce organized crime.

In addition to the pot protesters, about 12 mobile food trucks have appeared on the grounds.

Winnipeg police are also on the scene, but maintaining a discreet distance.

"People are gathering at this time to demonstrate their objections to certain laws," Const. Natalie Aitken, a spokeswoman for the police, said. "Those are laws that we do enforce, and we do enforce on a regular basis. At this time, there will be a judgment that is used."

Aitken said police were most interested in ensuring people did not operate vehicles under the influence.

Arrests in Manitoba for cannabis violations are among the lowest in Canada, according to the most recent information from Statistics Canada.

Only Prince Edward Island had fewer with 108 offences per 100,000 population.

Another survey, by Health Canada, shows that Prince Edward Island has the highest reported use of cannabis in the country. In 2007, 7.9 per cent of the island's population reported having used the drug, the same rate as in B.C.

A two-metre long bong, on the grounds of the Manitoba legislature. (Jeff Stapleton/CBC) 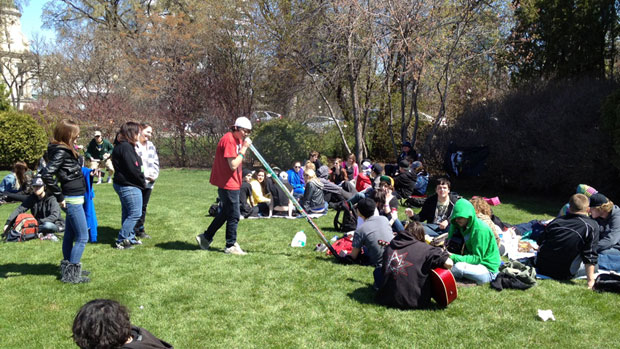 Canada: Government Sparks Plan To Determine How Cannabis To Be Distributed And Sold