Washington State - December might be the last month marijuana smokers can legally toke up at Frankie's Sports Bar & Grill, if the Liquor Control Board adopts a rule change now under consideration. The state Liquor Control Board has proposed amending one of its rules to prohibit "any employee or other persons to engage in the consumption of any type of marijuana, usable marijuana, or marijuana-infused products in a liquor-licensed business." The owner of Frankie's, Frank Schnarr, said he will fight the proposed rule change and ignore it if it is passed.

"It's gonna be a legal battle, I'm not going to give in to it," he said. There will be a hearing on the proposed rule change Wednesday morning at the Liquor Control Board's room at 3000 Pacific Avenue. The board is scheduled to vote on the proposed change on Wednesday, Dec. 18. Mikhail Carpenter, a spokesman for the Washington Liquor Control Board, said the proposed rule change is not meant to target Frankie's specifically. But Schnarr said Monday that his business is the only one in the state where patrons are currently allowed to legally smoke marijuana.

I-502 made it legal for adults 21 and older to possess up to an ounce of marijuana in Washington state. All Washington bars except for Frankie's currently prohibit smoking of any kind, but Schnarr had won a prior legal battle to allow patrons to smoke cigarettes in an upstairs room, provided they joined a club by paying $10 in annual dues to become "Friends of Frankies."

Since marijuana smoking is now legal in Washington state, patrons who are "Friends of Frankie's," can also legally smoke marijuana in Frankie's upstairs room, he has argued. Schnarr said Wednesday that Frankie's has about 13,500 members who are allowed to smoke marijuana in his upstairs smoking room. Schnarr's attorney, Shawn Newman, stated in an email to The Olympian that he will fight the liquor board's proposed rule change. The email stated that the liquor control board's proposed rule change is discriminatory to medical marijuana patients, and that it is prejudicial to Schnarr's right to due process.

Newman's email also stated that the prior approval of smoking at Frankie's before I-502's passage means that allowing marijuana smoking there should be grandfathered in. Smoking tobacco was approved in Frankie's private upstairs room by the state and the Thurston County Department of Health, Newman stated. Newman said in a phone interview Tuesday that it is "hypocritically schizophrenic" for the liquor control board to be adopting rules to profit on the legal sale of marijuana, but also attempt to prevent Schnarr from earning a living.

Schnarr said Tuesday that most of the people who currently smoke marijuana in his upstairs room have medical marijuana cards. "Under the law right now, medical marijuana is legal," he said. "Why would they pick on a business that supports them, financially," Schnarr said. Schnarr said he feels he has been singled out by Gov. Jay Inslee. "This is all Inslee," he said. "I'm in his front lawn, he don't like that." He added that it's "sad" the liquor control board is going after him. "It's an embarrassment to them," he said.

Schnarr said he doesn't expect the liquor control board to allow him to speak during Wednesday's meeting, but he's going to go there anyway. The three-person liquor control board currently making rules for the legal sale and consumption of marijuana in Washington state can adopt the rule change by a majority vote, Carpenter said. So far, local law enforcement has turned a blind eye to the consumption of marijuana on the premises, Schnarr said. Possession of, or smoking marijuana anywhere is Washington is illegal under federal law, but the federal government has so far done little to interfere with I-502, besides closing certain medical marijuana establishment, known statewide as "collective gardens," that sell marijuana only to medical marijuana patients.

Olympia police sometimes come to Frankie's if Schnarr calls them to break up a fight, but that's about it, Schnarr said. He added that a recent Christmas party was held at Frankie's by the Banditos motorcycle gang and there was no trouble at all. No one sells marijuana at Frankie's, Schnarr added. Marijuana smoking at Frankie's has been a boon for business, Schnarr added. Television stations from around the country, including Japan, Finland and Australia have flocked to Frankie's to write news stories after The Olympian's initial report publicizing the upstairs room where patrons can smoke marijuana, Schnarr said. "I'll be honest with you, if it wasn't for marijuana, I wouldn't be open," he said. "They eat, my God they eat. Business is up."

Schnarr said a television producer has even been to Frankie's, to try and work out a deal for a reality show on the bar, he said. If marijuana smoking becomes illegal inside the bar, Schnarr said he believes patrons would just smoke outside in their cars, as they did before the passage of I-502. "They've got to take me to court," Schnarr said. "Due process." Written comments on the proposed rule change can be emailed to the liquor control board by tomorrow, at rules@liq.wa.gov. 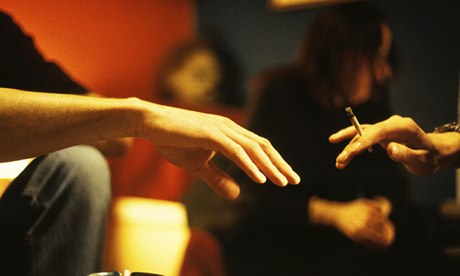