Power To The People

Jimmy Vaughn (a.k.a. Kindi) holds his sign of support for Alexis Bortell - a 9-year-old girl with epilepsy needing medical marijuana to survive - at Quakertown Park on Friday.

Denton resident Jimmy Vaughn decided to channel his frustration with Texas elected officials into something he loves: hip-hop music.

Vaughn is a 24-year-old graduate of Texas Woman’s University with a degree in legal studies. And like a lot of Denton residents, Vaughn said he was angry when state lawmakers passed House Bill 40, which nullified not just the Denton fracking ban - but any other ban like it elsewhere in Texas.

The so-called ban on frack bans stirred Vaughn to write and record “We the People,” under his hip-hop moniker Kindi earlier this week. In just a few days, the song earned more than a thousand plays online.

“Really, if we were to get into what the song is really about, it’s about government not representing the people,” Vaughn said. “Government taking funds from people and making promises. I know people are divided on the fracking issue. But I feel like if everybody votes on the fracking, respect it, you know?

“I feel like [politicians] just want your money. They take your money and make promises and then do what they want with it.”

As an emcee called Kindi, Vaughn raps with a slow, deliberate beat. His anger is palpable, and he uses typical rap slang to get his point across. There are f-bombs and some harsh metaphors over a sample of keyboard, snare and bass.

The song calls out state Rep. Myra Crownover - rhyming “your time wearing the crown is over” handily to her last name - for subverting the local vote to eliminate hydraulic fracturing for natural gas within city limits.

The song also takes up a popular cause in hip-hop - legalizing marijuana. He gives a shout out to Alexis Bortell, a 9-year-old girl with epilepsy. The Bortell family recently moved to Colorado, where they can legally use cannabis to treat Alexis’ epilepsy, which typical medicines had failed to control. Alexis’ family reported she had her worst seizure in February and stopped breathing.

“It breaks my heart that a Texas family would have to leave their home because they couldn’t get treatment for her legally,” Vaughn said. “I’m glad they were able to do that and get her the help she needed in Colorado. But it’s sad that a family has to leave Texas for that. It’s not like she was going to smoke weed.”

“A lot of people think it’s a great thing,” Vaughn said. “But it’s not really that big of a step.”

The legislation legalizes the non-euphoric component of marijuana known to treat epilepsy, along with other conditions. In “We the People,” Vaughn rages against what the singer sees as a puritanistic prohibition that leaves cancer patients and wounded war veterans suffering.

Vaughn hopes to shoot a music video for the song here and in Colorado as a show of support for Alexis Bortell. Meanwhile, his song is available for download for free. He’ll perform a fundraising show for Team Alexis at 9 p.m. July 17 at Andy’s Bar on the downtown Denton Square.

Vaughn said hip-hop producer Tony Snow plans to include “We the People” on a mix tape of Texas rap recordings. A release date hasn’t been announced.

Vaughn said a lot of his friends share his frustration with lawmakers.

“It seems like the lawmakers are taking the power out of people’s hands and putting it out of reach. That’s atrocious,” he said.

His frustrations won’t give way to apathy, though.

“I will always vote,” he said. 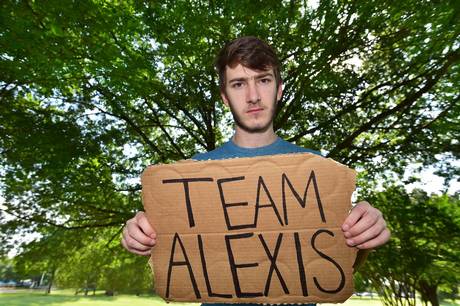