Washington, DC - Vote Hemp, the nation's leading grassroots hemp advocacy organization working to revitalize industrial hemp production in the U.S., is excited to report that President Obama has signed the Farm Bill which contains an amendment to legalize hemp production for research purposes. Originally introduced by Representatives Jared Polis (D-CO), Thomas Massie (R-KY) and Earl Blumenauer (D-OR), the amendment allows State Agriculture Departments, colleges and universities to grow hemp, defined as the non-drug oilseed and fiber varieties of Cannabis, for academic or agricultural research purposes, but it applies only to states where industrial hemp farming is already legal under state law.

Senator Mitch McConnell (R-KY) successfully worked to retain and strengthen the hemp research amendment during the Farm Bill conference committee process. "With the U.S. hemp industry estimated at over $500 million in annual retail sales and growing, a change in federal law to allow colleges and universities to grow hemp for research means that we will finally begin to regain the knowledge that unfortunately has been lost over the past fifty years," says Vote Hemp President Eric Steenstra.

"This is the first time in American history that industrial hemp has been legally defined by our federal government as distinct from drug varieties of Cannabis. The market opportunities for hemp are incredibly promising-ranging from textiles and health foods to home construction and even automobile manufacturing. This is not just a boon to U.S. farmers, this is a boon to U.S. manufacturing industries as well." The full text of the bill may be found at VoteHemp.com/FarmBil

So far in the 2014 legislative season, industrial hemp legislation has been introduced or carried over in thirteen states: Arizona, Hawaii, Indiana, Mississippi, Nebraska, New Jersey (carried over from 2013), New York, Oklahoma, South Carolina, Tennessee, Washington (two bills carried over from 2013), West Virginia and Wisconsin. The full text of these state hemp bills may be found at: Vote Hemp: Information: Political: Legislation: State.

In addition to the Farm Bill amendment, two standalone industrial hemp bills have been introduced in the 113th Congress so far. H.R. 525, the "Industrial Hemp Farming Act of 2013," was introduced in the U.S. House on February 6, 2013, and the companion bill, S. 359, was introduced in the U.S. Senate soon thereafter on February 14, 2013. The bills define industrial hemp, exclude it from the definition of "marihuana" in the Controlled Substances Act (CSA), and give states the exclusive authority to regulate the growing and processing of the crop under state law. If passed, the bills would remove federal restrictions on the domestic cultivation of industrial hemp. The full text of the bills, as well as their status and co-sponsors, can be found at: Vote Hemp: Information: Political: Legislation.

Vote Hemp is a national, single-issue, non-profit organization dedicated to the acceptance of and a free market for low-THC industrial hemp and to changes in current law to allow U.S. farmers to once again grow this agricultural crop. More information about hemp legislation and the crop's many uses may be found at Industrial Hemp Information and Advocacy - Vote Hemp or HIA: Hemp Industries Association: Industrial Hemp Trade Group, Education & Industry Development. Video footage of hemp farming in other countries is available upon request by contacting Ryan Fletcher at 202-641-0277 or ryan@votehemp.com. 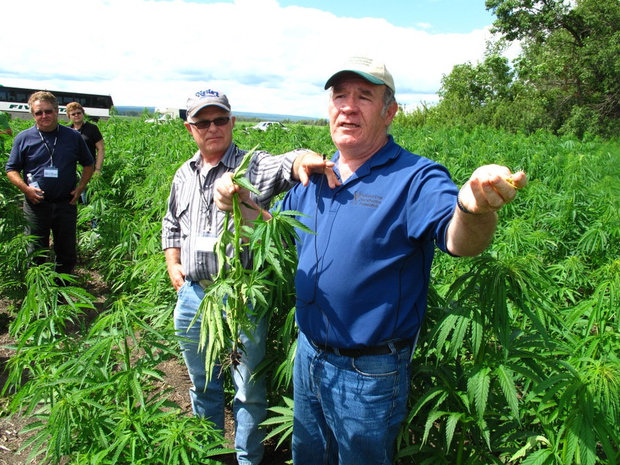