problem with 1 of my babies 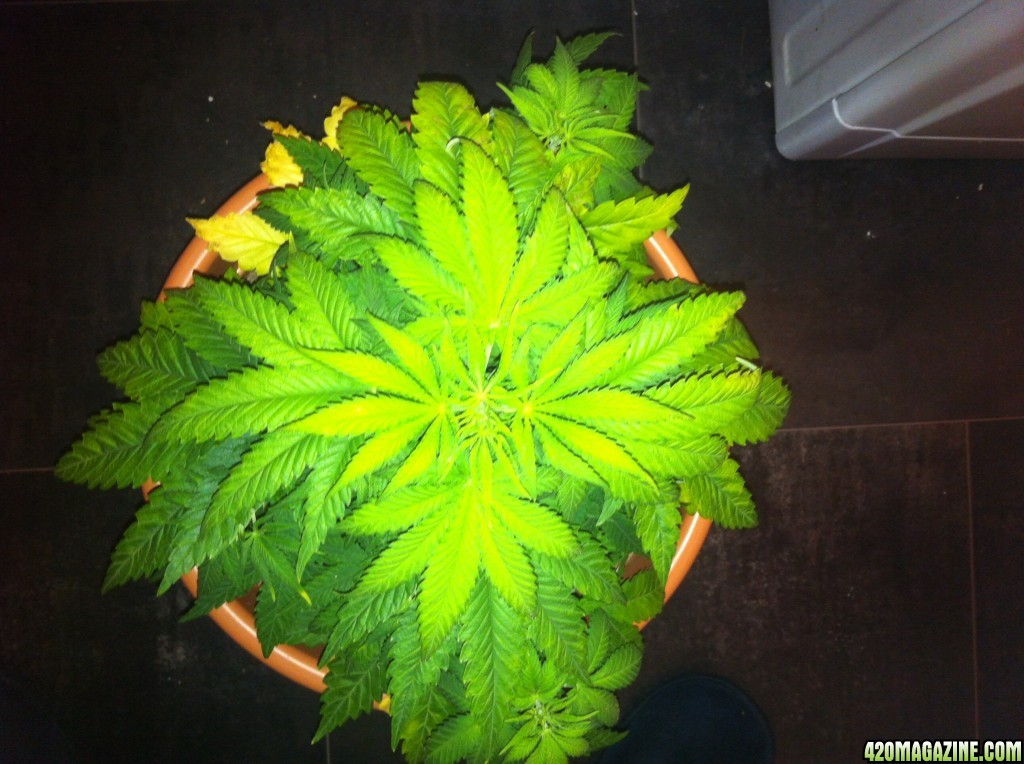 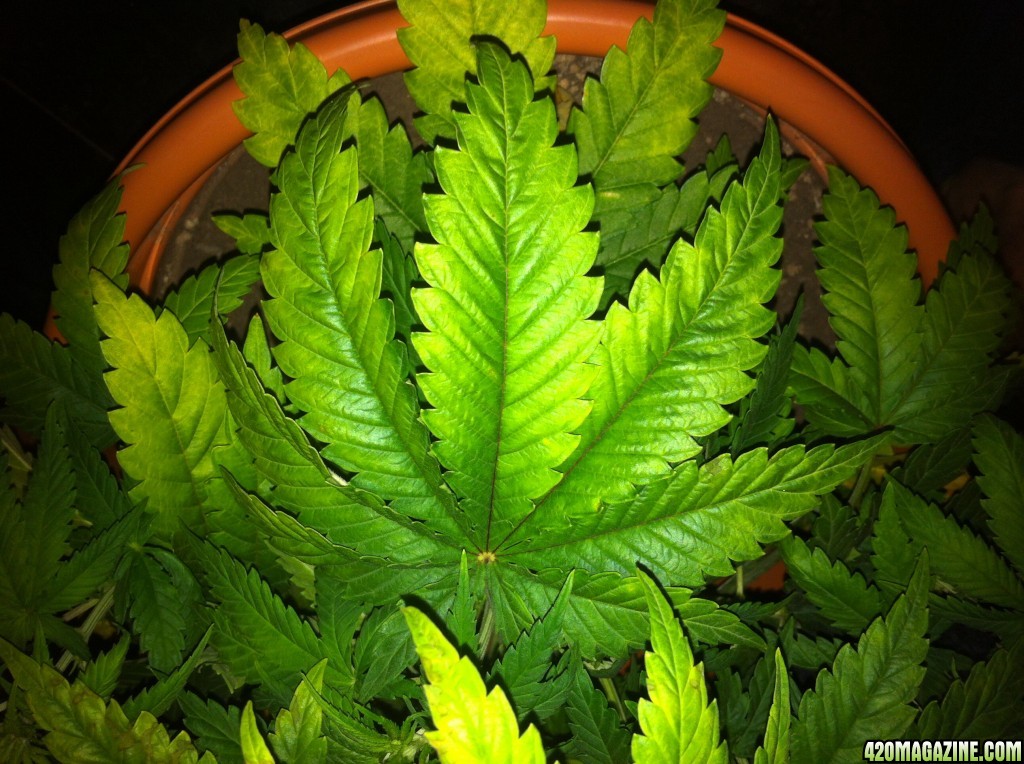 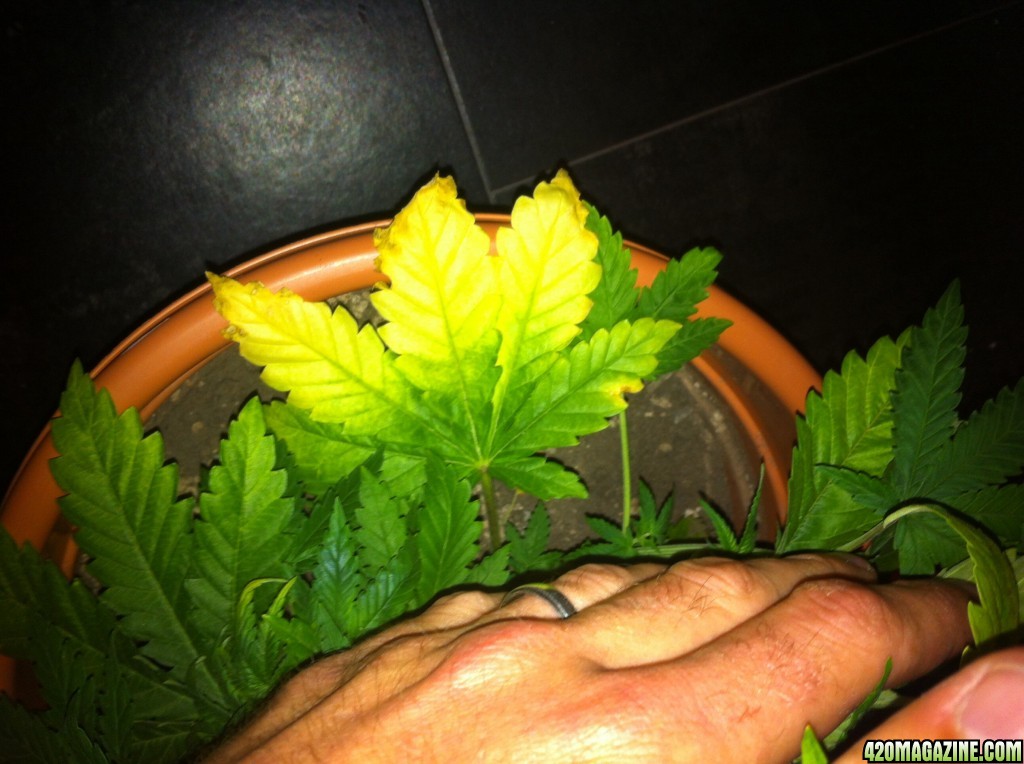 She is a skunk #1 plant
She is 5 wks old
Soil/perlite mix
Under 400 watt hps
When I started out on this project 5 wks ago today,my lady in question sprouted as a twin!that's right a twin,I had 2 sprouts up out the soil in the same pot after 2 days,didn't do the paper towel method,soaked seeds over-night and put them straight into soil so I guess there not quite 5 wks old.
When I transplanted them about 2 wks later,I chopped the weaker of the 2 twins just above the soil. Was going to try and seperate them at the roots but fear of killing both was heavy on my mind. I'm not using nutes right now as the soil has enough to last them 4-5 wks.I'm starting them this week on half strength to see how they cope. But anyways,the remaing twin is looking rather poorly,looks like its lacking in Something compared to the rest.I'm guessing that maybe because there is twice as much roots in there,its used up more nutes than the other 3? Thanks in advance peeps
:allgood:1st timerThe Beginning Has Begun :allgood:

Best place to start would be checking your ph levels. You would then be able to tell if you've got a nutrient lockout which leads to a deficiency. I'm not very experienced (on my first grow) but hear all the time that ph imbalance is often where the problem starts. You want your water ph and soil ph to be between 6 and 7 with 6.5 probably being best. Like I said not very experienced just adding my 2 cents

As I'm using the same water for all 4 plants,wouldn't the rest be looking the same if it was a ph problem? I'm very unsure as this is my 1st grow aswell. I've been looking around and think possibly its a nitrogen deficeny? Unsure at the moment.might try adding some biobizz nutes to here later on today when there awake.
:allgood:1st timerThe Beginning Has Begun :allgood:

Could be ph, but it looks like nitrogen to me. That's a lot of foliage so probably a heavy feeder.
Pantagruel's Perpetually Home
D

Got some bio-bizz grow,npk 4-3-6. Will give her some later when lights come back on. Thanks guys
:allgood:1st timerThe Beginning Has Begun :allgood:
D 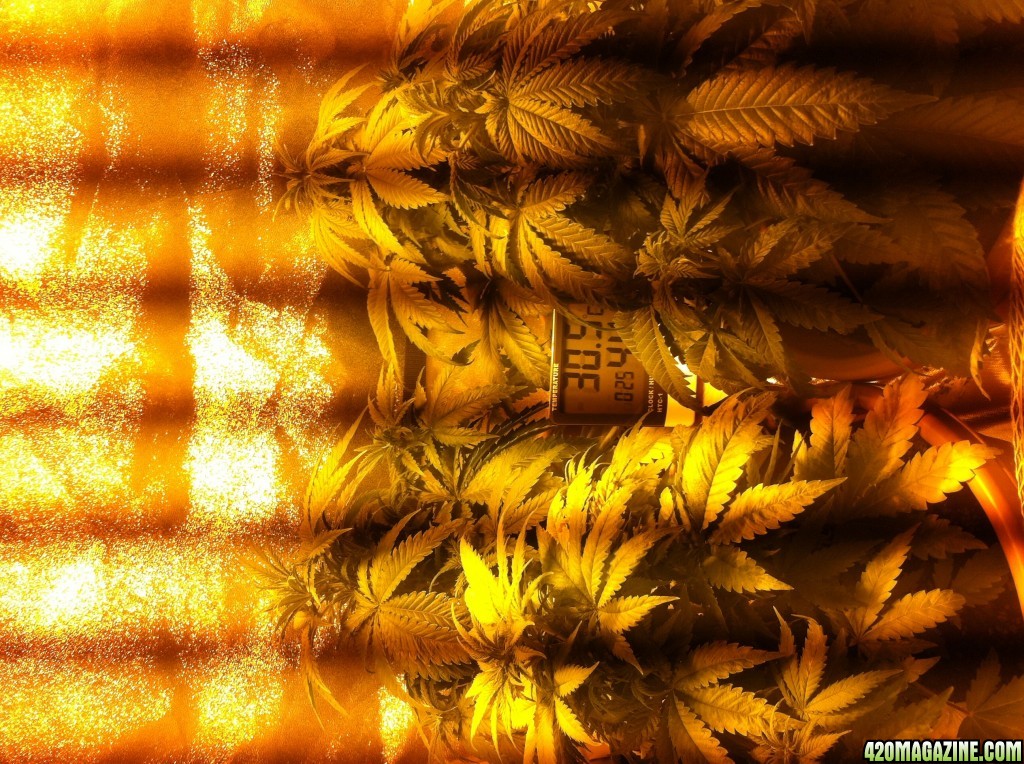 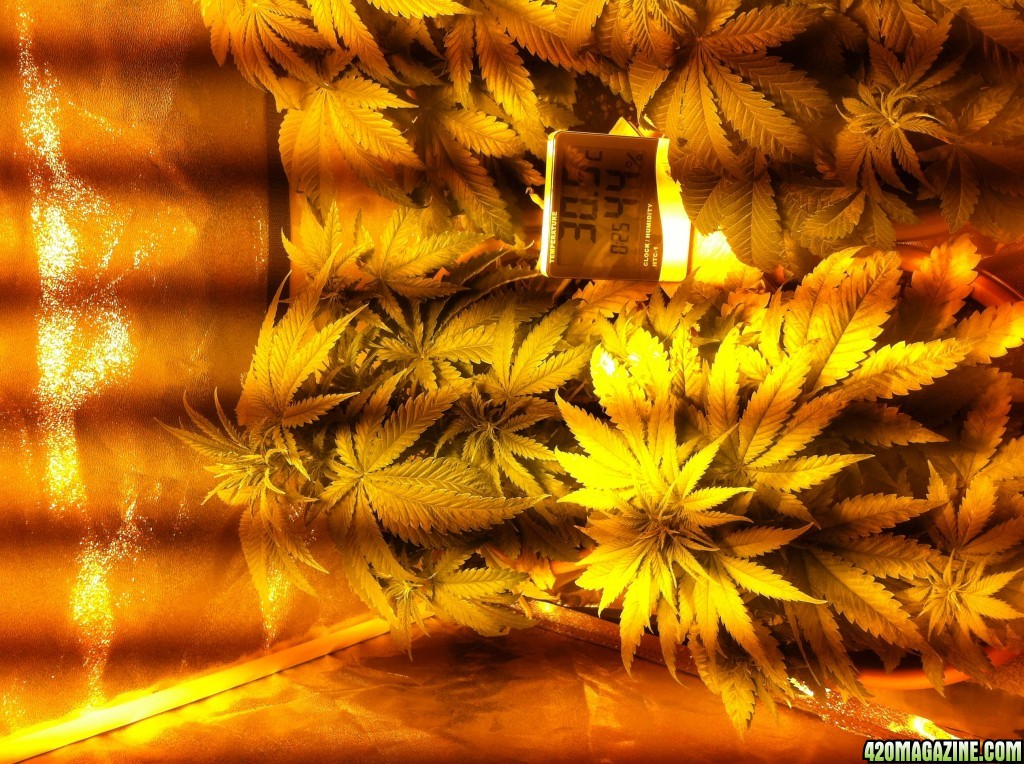 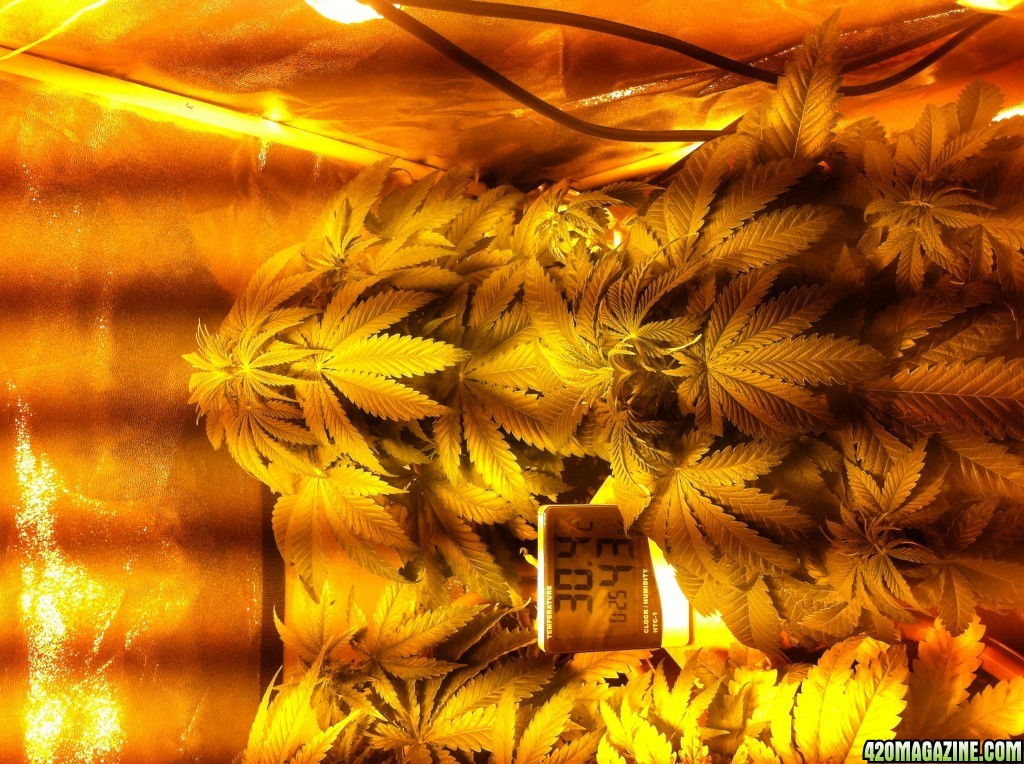 Gave my babies a small amount of nutes tonight(Sunday),2.5 ml into 1 litre of water then another litre of just plain water between the 4 of them. I will keep a close eye on them over the next few days,hopefully they will be fine. Here are a few pics from tonight.
Cheers
Peace out
Dusty
:allgood:1st timerThe Beginning Has Begun :allgood:
D

You can see the colour difference when there next to each other,obviously the lighter one is my sick baby.see how she is with some nutes into the mix
:allgood:1st timerThe Beginning Has Begun :allgood:
F

How did it go dusty?

I would also say a nitrogen deficiency, but that could also be lockout due to ph. Each plant is unique, one may show lockout at a ph of 7 while another may show at 8. You never know.

If it gets any worse I would flush with ph'ed water, then 1/4 strength Nutes.
Multi strain ebb and flow. (Currently flowering)

I'm riding it out at the moment. Any tips on quick fix ph down that I could get my hands on? Will look into ordering some.
:allgood:1st timerThe Beginning Has Begun :allgood:
D 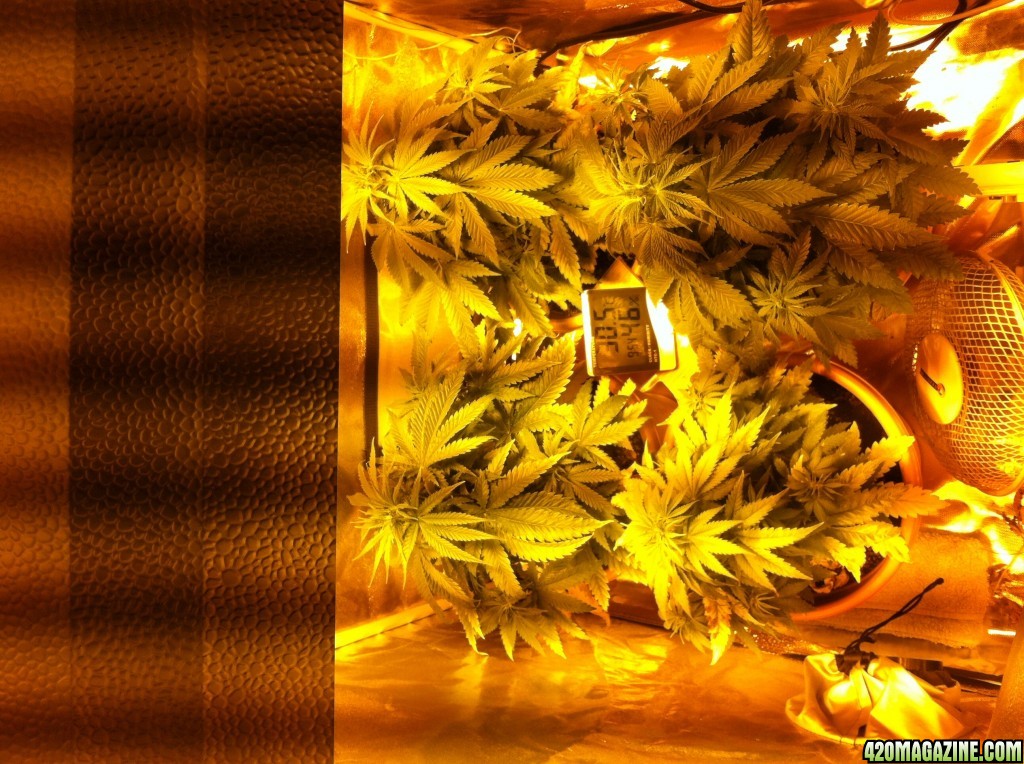 here's my babies today,more than happy with my progress so far.cost me a few bucks and a few headaches.Ha.all will be worth it through. Cheers guys
:allgood:1st timerThe Beginning Has Begun :allgood:
F

For soil use lime.

Oh dusty, I've been meaning to show you that setup I had mentioned about a month ago, it's still a ways from being completely finished, but I am almost finish with the veg room, just have to hang up some Mylar. 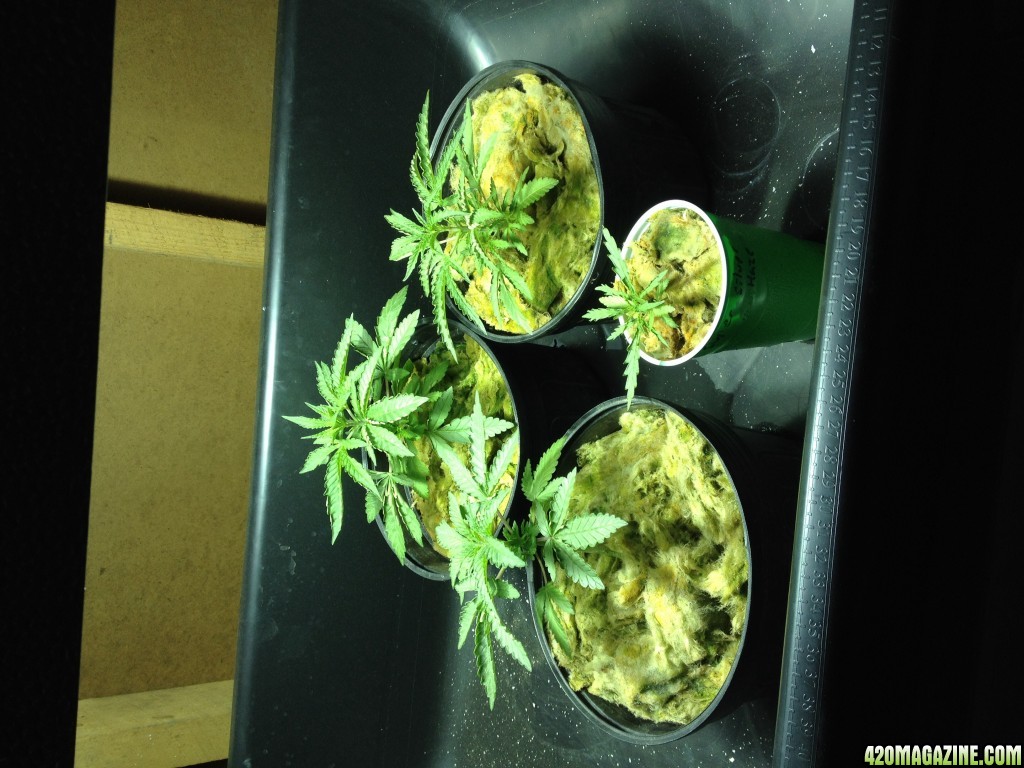 Anyways, planted four about two weeks ago. One is stunted and not sure why. I'll be getting a journal up soon.
Multi strain ebb and flow. (Currently flowering)

Nice mate,there coming along! Any ideas when I should flip my lights to 12/12?
:allgood:1st timerThe Beginning Has Begun :allgood:
F

Anytime you like. Honestly it's all personal preference and how much yield you are shooting for. I would try to veg at least 6 weeks.
Multi strain ebb and flow. (Currently flowering)

Am going for 50 days veg and possibly 50 days flower.probably run out of space but its my first time,this one is the learning curve. Still no great signal of improvement fro my neon looking plant,I think there's Something else going on with her? Thinking of pulling her out soon and just make more room for the 3 I have that's doing really well. Will make up my mind later in the week
:allgood:1st timerThe Beginning Has Begun :allgood:

You can flip to 12/12 any time, even from seedling but the plant will not start flowering until it is mature which typically takes about a month. Once the plant starts flowering you have no control over the flowering phase, it is determined by the plant strain and will typically take 60-90 days depending upon the strain. Autos are a different story as they do not require a lighting schedule and will just flower automatically when they are ready no matter what you do with the lights.
Key Threads:
*How To Make Concentrated Cannabis Oil *How To Dose Concentrated Cannabis Oil Correctly
*My Blogs

CONTESTS:
Plant, Nug and Member of the month

F
whats wrong with my babies?

G
Help - Are my plants salvageable?