As a mother of four children, Robin Schneider sympathizes with women who try to provide medical marijuana in a safe, legal place.

The Lansing-area woman uses a medical marijuana ointment on her back to relieve chronic pain from a serious fall when she was 19, and she said she won't travel to a "back alley" to get a substance voters have determined is now legal for limited use in Michigan.

Schneider was one of 15 protesters outside Brighton's District Court, where a Handy Township couple, who operated a medical marijuana dispensary that was twice raided by police, was being arraigned on charges they delivered marijuana to an undercover officer posing as a medical marijuana patient.

One of the owners, Christi Marshall, is a mother, Schneider noted.

"I'm grateful to them for helping so many people obtain medical marijuana safely," she said.

While some people smoke marijuana, Schneider said, others take it in capsules, use vapor machines to relieve asthma or use an ointment like herself.

Ideally, Schneider said, she wants a place with a well-lit parking lot where she can get her ointment. She can only get her ointment at a dispensary similar to Marshall Alternatives.

"I want a drive-through pharmacy," she said.

She's a member of the Greater Lansing Medical Marijuana Association, a volunteer with the Michigan Association of Compassion Centers and the Michigan representative for Americans for Safe Access.

At 19, Schneider was seriously injured in a fall and broke her back, which caused nerve damage. She spent a year in a wheelchair and gradually regained her ability to walk. She underwent therapy and used prescription painkillers for years, but she stopped using those drugs due to side effects and fears about permanent damage to her liver.

"I just think medical cannabis is much safer," she said. "It doesn't do any damage to our bodies." 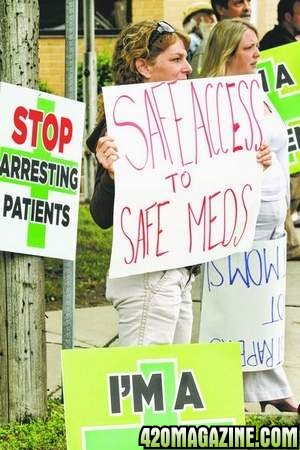