If you wanted to attend the Colorado Symphony Orchestra's first-ever marijuana-friendly concert last week, you had to follow the rules. First, you had to be one of the lucky 250 or so who scored an invitation to the event, since the May 23 brass quintet concert, the first of four "Classically Cannabis" fundraising shows in the symphony's "High Note Series," wasn't open to the public. Then, you had to be at least 21 years of age and bring your own cannabis. Finally, warned a lengthy disclaimer on the Web page for the event, each of the guests who donated at least $75 to attend assumed all risk associated with using pot; concert-goers had to agree to not hold accountable "the Colorado Symphony Orchestra ... and their owners, partners, employees, directors, officers, agents, affiliates and related entities" if something went horribly wrong.

If you were a member of the media who showed up at the large, modern art gallery hosting the concert last Friday night, there were more rules to follow–such as, according to the press advisory, not going on the gallery's open-air patio, the only place at venue where people could actually consume marijuana. This is what happens when you put on a pot-themed classical music concert: you get a lot of rules–not to mention a lot of attention. Reporters from the New York Times and the Times of London prowled the gallery before the show and a camera crew from CBS This Morning zoomed in on the brass quintet as they straightened the special green ties they were wearing for the event. Well-dressed patrons–many of whom were associated with marijuana-related law firms, consulting companies or similar businesses–perused the modern art on the walls, then braved the evening drizzle to grab gourmet tacos and popsicles from the squadron of food trucks stationed out back for the event. In a corner near the front entrance, the dispensaries that, along with a soil company and Leafly, a Yelp-like site for marijuana strains, together shelled out $30,000 in event sponsorships manned schwag tables offering up promotional rolling papers, lighters, and glass storage jars. "We have vape pens as well!" announced Evan Butman, general manager of Wellspring Collective, producing a thin black device from his pocket. Just then, one of the event organizers hurried over. "You cannot give those out to anyone here," she warned sternly, gesturing at the offending vaporizer.

"Of course, we knew we would get some pushback, said Evan Lasky, the symphony's chief operating officer, of the press release the organization sent out in late April announcing the Classically Cannabis shows, which they were organizing with a local cannabis company called Edible Events. But the ensuing pushback came not from the general public (which, in an informal Denver Post poll, came out two-to-one in favor of the concerts), but instead from Denver officials. The shows, warned city lawyers, risked violating laws prohibiting public marijuana use. So the symphony refunded all ticket sales and made the events invitation only–and in the meantime drew even more media interest, turning the shows into the hottest events around.

"My wife is a publicist, and she's never seen anything quite like this," said Lasky of the attention the concerts have generated. Of course, concedes Lasky, the symphony needs that sort of attention, especially if it translates into ticket sales and donations. "We are a typical performing arts organization; we are always struggling financially, that is just the nature of the beast," he says. Those financial struggles have become increasingly dire. Around the country, several regional symphonies have recently shut down, the Philadelphia Orchestra filed for bankruptcy in 2011, and the Colorado Symphony is struggling with how to make rent for its own symphony hall. To bring in new supporters, the Colorado Symphony has been pursuing various innovative events: joint concerts at Red Rocks Amphitheatre with acts like DeVotchKa and the Lumineers, "Remix" happy-hour concerts geared towards young professionals, and "Beethoven and Brews" performances sponsored by the local craft beer industry. So why not partner with one of the newest and the most lucrative industries in town, even if the product it sells is still illegal under federal law?

Marijuana business stakeholders likewise seemed eager to collaborate. While their industry might be flush with cash, it's lacking the one thing the symphony could provide: cultural cachet. "What's great about the event for both the marijuana industry and the symphony is they both suffer from a similar stigma: 'This is not for me,' " said Shawn Coleman, a former principal clarinetist of the Wyoming Symphony who now works as a marijuana lobbyist, as he made his way about the Classically Cannabis event with a glass of punch in his hand and a stylish straw hat perched on his head.

These concerts, however, are about more than just shattering stereotypes about marijuana smokers and symphony goers. Thanks to city lawyers getting involved, the performances are also forcing people to confront a major lingering question about the legal pot industry: Since public pot consumption is still prohibited, how can you hold marijuana-related events? "It's obviously a huge issue in this state, since we are now telling people from around the world that you can come here and buy cannabis here, but there is nowhere they can smoke it legally," said marijuana businessman and consultant Kayvan Khalatbari, who produces a invite-only marijuana-friendly Denver stand-up show called Sexpot Comedy. "The discussion about marijuana and public events had to be had at some point, and I would rather have this discussion over an insanely talented group like the symphony rather than a Snoop Dog or Wiz Khalifa concert."

Maybe that discussion will lead to Khalatbari's preferred solution: bring-your-own-cannabis "consumption cafes" all around Colorado, similar to venues now operating in Vancouver. While the state decides how to address such matters, the orchestra had its own tricky question to answer: What, exactly, should an envelope-pushing symphony perform at an ostensibly pot-themed concert? The five-piece brass ensemble seemed to be heralding a brave new world of music by beginning their program with Richard Strauss' "Also Sprach Zarathustra Fanfare," the ominous, swelling overture that begins Stanley Kubrick's 2001: A Space Odyssey. But in truth, admitted Justin Bartels, the principal trumpet player who programmed the music, the selections weren't designed around any sort of marijuana theme at all.

"The thought crossed my mind," he said before the show. "But then I remembered, you never know when an audience member is actually partaking in alcohol or marijuana anyway." So no Led Zeppelin? "No," said Bartels, "But we will be doing Zeppelin on June 8 at Fiddler's Green Amphitheatre."*

Maybe it's for the best the ensemble didn't try to come up with psychedelic chamber music. As the quintet played through a greatest hits of Debussy, Bach, and Wagner, those in attendance struggled to come up with any examples of marijuana-related symphony music. One classical music fan suggested Hector Berlioz's hallucinogenic 19th-century epic Symphonie Fantastique, although admittedly, that symphony was based on an opium dream, not getting stoned.

And while everyone from Louis Armstrong to Carl Sagan has sworn that marijuana makes music better, science is divided on the matter. On one hand, being stoned is a state of euphoria, which seems like a pretty good for appreciating music. On the other hand, recent studies have suggested marijuana reduces intelligence, not to mention users' appreciation of context, and there's general agreement that during use, marijuana impairs short-term memory and cognition. So even if marijuana primes your brain to embrace the pleasures of a symphony concert, you may be too zonked out of your skull to appreciate its subtleties–or remember much about it the next day.

Whether the cannabis helped or not, the music at the symphony performance was a hit. "I am watching history being made!" exclaimed a gray-haired woman named Roxanne Prescott as she sat on the patio packing an ample amount of "Flo" into her glass pipe. (The symphony never bothered enforcing its no-media policy for the smoking patio.) "I don't like those I call punk-ass dead-head stoners," she adds between puffs. "This is more comfortable for me. It feels upper class."

A few days after the performance, Lasky admitted the successful but staid event "was a little anticlimactic." (The good news is that the series has already raised $50,000, on target to hit its four-show goal of $200,000.) Maybe the festivities will get feistier at the two other bring-your-own-pot chamber-music shows scheduled at the art gallery later this summer, or at the High Note Series' big finale: a full symphony performance at Red Rocks on Sept. 13. Yes, the final show isn't technically marijuana friendly, since Red Rocks is a public venue. But as anyone who's ever attended a Phish or Widespread Panic concert at Red Rocks can attest, that is one marijuana rule that's made to be broken.

Correction, May 29, 2014: This piece originally misstated the date of the Led Zeppelin-themed concert. It will be on June 8, not June 4. 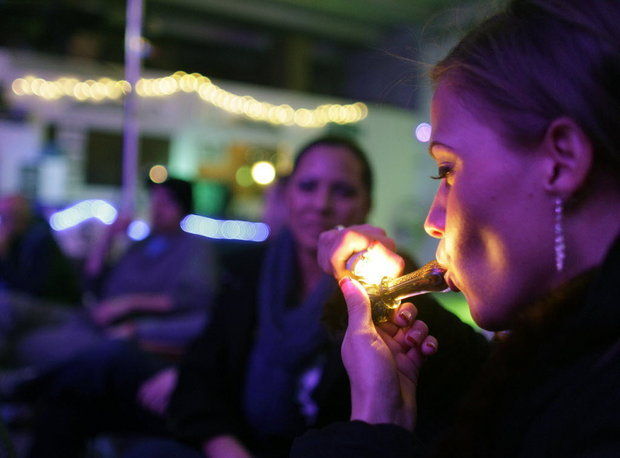 J
Colorado: Campaign Would Allow Marijuana Use In Bars