There's tons of artists who rap about their appreciation for marijuana. You have guys like Wiz Khalifa who named his major debut, Rolling Papers; and then vets like Snoop Dogg whose name is synonymous with the sticky-icky. But when it comes to weed in hip-hop, a duo outta Humboldt County, Calif. who call themselves Potluck, have taken weed rap to a whole other level.

Potluck -- consisting of 1 Ton and UnderRated -- have been doing their thing for nearly a decade, starting from the ground up in an area of Cali where there's virtually no music industry to connecting with stoner fans across the globe.

For regular BallerStatus.com visitors, you may be familar with these guys through a series of video diaries we've dropped over the past several months. Most recently, the four-part "Making of" series where Potluck walked us through the making of their latest album, Rhymes & Resin.

Now, with their album in stores, we decided to sit-down with the group to talk about a variety of things -- including their beginnings in hip-hop, breaking out of a small market like Humboldt, working with artists like Glasses Malone and Ill Bill on their latest album, and of course, about weed.

BallerStatus.com: Rhymes & Resin is your sixth album. How have you guys evolved since dropping your debut back in 2001?

1 Ton: We made our first CD thinking we would just sell and give away CDs to our friends and family. Then, we put some on consignment, locally, and the whole thing blew up. We were the top-selling CD in Humboldt and had the #1 song on the radio. Since then, we just kept making music and continued to improve our skills. Our motto is to keep getting better with every record and challenge each other on every track. We believe we have, in fact, improved our beats, raps, and mixing with every CD, and this one is again our best!

BallerStatus.com: This is also your third with Suburban Noize. We first were introduced to you guys through them. What's your experience been like with the label? And, how have they helped you grow?

1 Ton: It's been real good. It's awesome when the CEO of the label wakes up and goes surfing. We relate to everyone who works for the label. It's like a big family... We are allowed 100% creative control with our music too, so we can do whatever we want to do! Suburban Noize has been pushing records for over a decade and has had great success. We are happy where we are at and love where we are going in the future.

BallerStatus.com: Rhymes & Resin, that title seems to be the epitomie of hip-hop and weed. What's behind that title?

UnderRated: We had a contest and let the fans send in suggestions for our CD title. The guy who came up with the one we liked the best lives in Australia. It's dope, knowing people from all over the world are listening to some stoners from Humboldt.

BallerStatus.com: Tell us a little more about this record. Obviously, it's a lot of smoking, but what should fans expect this time around?

UnderRated: We did a lot of songs with other artists in the past like Tech N9ne, E-40, Charli 2na, D12, etc. For this CD, we wanted to do something different. We wanted to do some new ideas and make songs with people we've never done songs with. We got together with Glasses Malone, King Gordy, Murs, Mistah FAB, and Ill Bill and Slaine of La Coka Nostra. This album is better in every aspect. It has a little bit of everything on it -- life, love, and of course, Mary Jane. There is definitely something for everybody on this CD.

BallerStatus.com: This record, there's some nice collaborations. You have all the guests you mentioned ... and even a track produced by DJ Quik. Talk about working with these guys.

UnderRated: We've been friends and fans of Murs for hella long! It was dope to finally do a song together. It's about the hip-hop police, people who think hip-hop should be controlled and should only be done one way. Murs is the Hip-Hop President, who listens to all types of hip-hop. It's sick how we came together to fight the hip-hop police with our own twist. "Hands Up" is one of our favorite songs on the CD and includes Mistah Fab too! Ill Bill was hella cool to work with. He is a heavyweight lyricist! We've done shows with him back when he was with Non-Phixion and recently with La Coka Nostra. We have different styles, but we also have respect for each other as MCs. It's always cool to combine styles and see what happens. "Microphone Killa" combines Ill Bill from New York City, Slaine from Boston, and Potluck from California all on one track.

1 Ton: Glasses Malone represents what is great about hip-hop. He made a big name for himself on the underground and flipped it into a deal with Cash Money Records! We did "Born To Be A Mic King" with him on the album. When we thought of the concept of the song and how sometimes music just feels like your destiny, we wanted another voice on there ... a voice that repped the West from another angle and Glasses was the perfect fit for the song. It came out so dope.

Making songs with DJ Quik beats was crazy. He has always been one of our favorite artists since the early 90s. Quik is known for his tight beats and to actually make songs on them was one of our greatest accomplishments. The songs turned out real good too.

BallerStatus.com: It's no secret you guys are from Humboldt. What's the hip-hop scene like out there?

UnderRated: We always stay true to the people in Humboldt. If you look at our CDs, you will notice that we always have a lot of artists out of Humboldt along with the national acts. We feel that people in Humboldt can add to one of our songs and make it be just as good as anybody out there. On our new CD, we have Garth Vader, Ishi Dube, James Boy, Berel Alexander, Vidagua, and Brian Swislow.

BallerStatus.com: It's not the biggest market up there, so how were you guys able to break out of the small Northern Cali town?

1 Ton: There are positives and negatives about being from Humboldt, just like everywhere else. In the beginning, of course, one negative was that we didn't live in a big city and weren't around other people that were heavily involved in the rap game. We had to teach ourselves everything from making the beats and rapping to engineering and mixing. It was hard to start from scratch and learn it all ourselves, but this is also how we developed our own unique style.

Hip-hop is everywhere now. It doesn't really matter where you're from. If you combine talent with determination and a little luck, you can make it happen. We have continued to improve and gain fans every year since 2001.

BallerStatus.com: In the tour diaries you guys dropped here on BallerStatus.com, there was the opening clip, where 1 Ton hadn't smoked in like a full day or something. How much smoking really goes on with Potluck?

UnderRated: We live in Humboldt, so we get the best of the best weed to smoke on whenever we want to. Whatever you think is a lot... ee smoke more than that!!!

BallerStatus.com: Humboldt (and Cali), obviously, has the best weed in the world. But, have you ever been to a city or region, where they surprised you with the kind of weed they had?

1 Ton: When we first started touring nationally with Tech N9ne, the weed available to us was horrible. The Northwest -- including Oregon and Washington and sometimes Colorado -- would have good weed though. Lately, times have changed and the medical marijuana movement is here! For example, we got a duffle bag of weed handed to us in Detroit on the last tour and the weed was good! Although it's getting better in some places around the U.S., because of the medical, it's still not even close to home! We are weed snobs!

BallerStatus.com: Can you tell us one story where maybe you guys ran outta weed ... and how did you deal with it?

UnderRated: We have NEVER ran outta weed at home in Humboldt. There is just too much weed around and our friends have tons of the best. But when we are on national tours that last over a month, we occasionally run pretty low. Luckily for us, when you tour and do hip-hop music and your group's name is Potluck, weed isn't too hard to find. Most of our fan's #1 goal is to smoke with us. If we need weed, we can always get it at the show or we will know a friend in that particular city. It's one of the many bonus' we get for being in the rap game and being from Humboldt.

1 Ton: Our new CD, Rhymes And Resin, just dropped and we are working on promoting that. We have a new video out called the "3 Minute Miracle," where UnderRated raps non-stop for over three minutes in just one take. Do a search on YouTube to check it out.

And we are gearing up for our first national headlining tour that will begin in mid-September! We are very excited about that. 2011 for Potluck is going to be our best year yet! 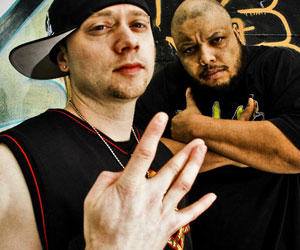 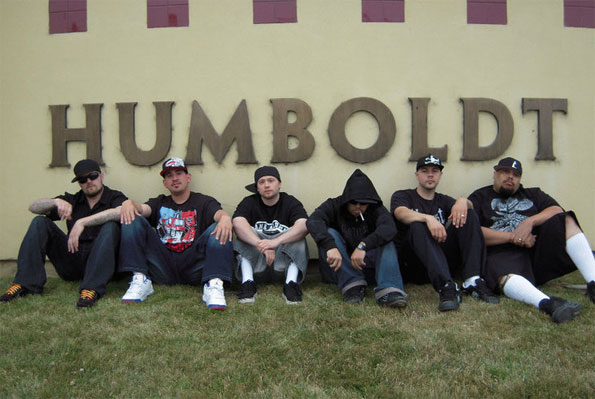