Longtime civil liberties activist Ben Masel, a Kossack for seven-and-a-half years, has passed away as a consequence of lung cancer. He was 56.

He was a fighter to the end, going to the last of hundreds of protests he was involved in during the uprising against Gov. Scott Walker at the capitol in Madison, Wis., where he lived for 40 years:

He doesn't have health insurance and hasn't had a conventional job in a long time. But he has a history of winning false arrest and First Amendment lawsuits, "which is a great hourly rate if you can wait forever to get paid," he joked [six weeks ago].

Masel has also been a constant presence at the Capitol protests over the past month, even defying a doctor's order that he remain in the hospital.

"If I'm going to be deceased today, I can't think of a better place than in the rotunda," he told his doctor.
Click to expand...


In short, while many talked the talk, Ben walked the walk, compiling more than 800 pages in his FBI file (the last time he looked).

Often a candidate, but never a victor, Ben had declared his candidacy in the 2012 U.S. Senate primary for the seat held by Democrat Herb Kohl. It was not the first time he challenged Kohl.

In an interview with Ben five years ago, Nathan J. Comp captured his activist essence quite well:

Walking the fine line between activist and troublemaker has earned Ben Masel, since the early 1970s, a fair amount of time in court. A boundary pusher, Masel's legal tussles often stem from his leafleting and sloganeering where such activities are prohibited. Businesses see these anti-campaigning policies as protection for their patrons. However, Masel sees them as impositions on his civil liberties.

Most recently, Masel was gathering signatures on July 3, at the Memorial Union in a restricted area of the terrace. Masel, 51, was gathering signatures in his effort to get on the Sept. 12 Democratic primary ballot. When told he was in violation, Masel challenged the policy, was pepper-sprayed and then arrested. His signature drive, if not his arrest, paid off. Just days after the Union scuffle, Masel turned in nearly 2,200 uncontested signatures, effectively pitting him against Democratic incumbent Herb Kohl (D-Madison) later this summer.

Admittedly, Masel doesn't stand much chance of winning. He's OK with that. Sporting a T-shirt with the word "Vote"� transposed over a marijuana leaf, Masel seems to like shaking the system more than playing by its rules. He's had an axe to grind since facing the Vietnam draft and his soon thereafter expulsion from UW-Madison for anti-war shenanigans.

Masel, a perpetual anti-hero, underdog and irascible champion of the people, may not be a quality candidate in any election, but the same could be said of many current holders of high office, including his opponent, Herb Kohl. In that regard, what a treat it would be if—by some wonderful misfortune—voters let Masel bring his 35-year-old rebellion to Washington. There, he could team up with Sen. Russ Feingold (D-Madison), to form a dynamic duo in a chamber of cowards, together pushing back the tide of retrogressive legislation sweeping the nation.
Click to expand...


His 35-year-long fight against marijuana laws was nearly legendary in Wisconsin. He was repeatedly arrested for protests and spent time in prison for a cannabis conviction. He was state director of the National Organization for the Reform of Marijuana Laws for six years in the late 1980s and early 1990s, and was vice president of the state branch of the organization for nearly a decade before his death.

"I didn't think it would take this long," Masel said about his still-unrealized hope to legalize marijuana. 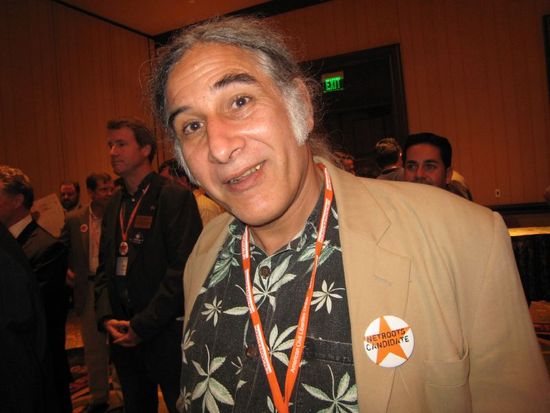