Now, there are two medical marijuana dispensaries in Rhode Island.

On Wednesday afternoon, the state Department of Health announced that it has issued a registration certificate to Greenleaf Compassionate Care in Portsmouth, meaning that it has received the green light to sell marijuana to patients in the state medical marijuana program.

"We are thrilled to finally get it and the Department of Health has been a big help in the process," said Seth Bock, co-owner of the dispensary.

Greenleaf becomes the second marijuana dispensary in the state. Last month, the Thomas C. Slater Compassion Center, at 1 Corliss St., in Providence, got its registration certificate and opened for business on April 19.

Marijuana generally takes about 16 weeks to grow and harvest, so both dispensaries have bought marijuana from licensed caregivers and patients across the state. As of last week, there are 5,467 patients and 3,592 caregivers participating in the program.

Slater has about 850 registered patients, while Greenleaf hopes to have about 200 customers to start.

This week, Greenleaf has opened its doors at 1637 West Main Rd., from 2 to 6 p.m. each day, but they have not been permitted to sell marijuana to patients. Greenleaf's building is just 2,800 square feet, about a fifth the size of the much larger Slater center.

Bock, in a telephone interview, said that "there will be medicine of the shelf," on Saturday and he hopes that his staff can begin selling the cannabis to patients this weekend, or by Monday at the latest.

So far, Rhode Island and Maine are the only two New England states that allow the sale of medical marijuana from dispensaries. Vermont is expected to follow suit next month. Connecticut and Massachusetts are working out the details of their programs that were approved last fall.

Under Rhode Island law, the state is allowed to have no more than three dispensaries. Summit Medical Compassion Center is in the process of formally applying with the Health Department to open a cultivation center and dispensary in Warwick. 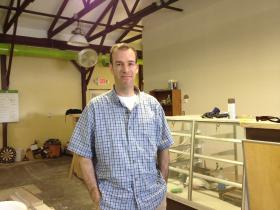