looking really good man. definatly grew a lot since the last time haha Looking really healthy too. It's not too bad of an idea to take clones a month into flowering but not really the best because that can sometimes add a lot of stress and change things during flowering.
"There's high, and there's high, and to get really high--I mean so high that you can walk on the water, that high--that's where I'm goin'."
- George Harrison, circa 1968

Yes, it looks like a packed house, but I can't think of anything better!
I am quality control for all my medical needs

Yeah they are much bigger. I'm hoping the large one is female. If it is, I'll be cloning that one. Supposedly if you remove the buds and leave the plant in tact it can be vegged again for 30 days and reflowered. I will try to do this to the large one if it's female while I manage the clones.
Want to see what DWC can do? Would you believe 1 lbs 6 oz in a phototron? It happened.

from one monkey to another, those plants are looking good. soon itll be a box of buds and youll have a great present to open up on xmas. im a bit concerned about the yellow tips though, looks like fert burn. what kind of nutes are you using? also how close are your LEDs to the plants? i thought the were ike flouros with you having to place them close to the tops for good effect.
anyway the grow is going awesome and hope you many banana buds
we must go through hell to know the true beauty of heaven.
"if what you keep holds truth inside, stand up defend, or lay down and die." P.O.D.
"How infinitesimal is the importance of anything I do, but how infinitely important it is that I do it." --Voltaire

*disclaimer: i am crazy

the large plant had some fert burn from before (about 2 weeks ago). allt he new growth is fine. I gave them some 10-10-10 a couple weeks ago and they didn't like that. 90% of this grow was just plain water.

The LED's have a 15 degree angle and are suspended 8 - 10" above the plant tops. One red and one blue. The large plant really seems to be reaching for these.
Want to see what DWC can do? Would you believe 1 lbs 6 oz in a phototron? It happened.

^^
whats the advantage to the LED's?
J

looks good bro...you got a nice lil operation goin. keep us posted and keep on rockin

Burn_it said:
^^
whats the advantage to the LED's?
Click to expand...


The LED's provide 6.5w of high intensity ultra red and blue. These particular wavelegths stimulate the action of chlorophyl A & B. Think of it as a plant spot light. The larger plant was really trying to crowd out the other 2 and steal all the light from the LED's.

Anyway, I started them on 12/12 two days ago and I'm starting to see some indication of sex.

Bad news: I suspect the large white widow with the huge stem is a male, which is quite unfortunate. This plant apears to have little balls forming on small stock at all the major nodes. I will watch this for a few more days to confirm, but I don't exactly have high hopes for that plant. This sucks balls because that large plant is about half of the leaf mass in the phototron. Once I am sure it's a male, I'll be cutting it off at ground level and feeding it to the garbage disposal. BTW, does anyone know if it's possible to shred the males and use a butane wash to get resin off of them? Is there anything can be extracted from a male? I've heard that the male tend to cause headaches.

Good news: The mid height, second white widow apears to be developing little cones with 5mm hairs. This most definitley looks female. It's obviously diffent from the larger one.

The smallest plant is about a foot high, it's a Northern Lights. It won't produce much, but there is no room for it in the box. So I'm basically going to flower it and if it's female use it for a couple clones. Right now I don't see any indication of sex yet. It's only been two days after all.

The next setup I'm going to run will be a bubble bucket deep water culture setup in the phototron form the most robust of the clones that I take from the females that display in this grow. The next grow will be a real crop. THis one, was more of a learnign experience for me.

Anyway, I'll post some pictures hopefully tomorrow. I want to get some good shot of these plants once they clearly display sex.
Want to see what DWC can do? Would you believe 1 lbs 6 oz in a phototron? It happened.

^^
interesting, I would have never guessed but now I will experiment with LED's. It does sound like the large white widow is a male. Sorry but on a lighter note it sounds like your right about the smaller being female. I'd get pics up ASAP so we can confirm and you can move the male and give the female more room.

Burn_it said:
^^
interesting, I would have never guessed but now I will experiment with LED's. It does sound like the large white widow is a male. Sorry but on a lighter note it sounds like your right about the smaller being female. I'd get pics up ASAP so we can confirm and you can move the male and give the female more room.
Click to expand...


They are now in their 4th day of flowering. The plants have all gotten even larger in the last 4 days. At this point I can no longer keep the leaves away from the lights. I am not so worried about buring the leaves of the large plant since it looks like a male. I'll get some photos tonight when the lights come on so you guys can see how much this stuff has grown in 4 days. Hopefully I can get a good enough picture of the structures on the large plant to confirm it is a male.


The big plant looks like it is forming male flowers similar to the ones shown in the top left circle. The flowers ont he second plant look alot like the top right circle.

As long as I get 1 female, I'll be happy. The big one would have menat a significant yield, but alas the ultimate goal was to identify a single female to use for clones. The next grow will be a single female clone in a DWC bubble bucket inside the phototron. It should be much easier to grow a big female without it having to compete with 2 - 5 other plants in a phototron.
Last edited by a moderator: Oct 17, 2008
Want to see what DWC can do? Would you believe 1 lbs 6 oz in a phototron? It happened.

I uploaded new photos. I'll post them as soon as they are approved. It's terribly difficult to get a good close up of the little stalks with balls on the big one, but maybe you cna see enough from the pics.

Fee fie foe fum... This plant has 3 more day to prove me wrong befor I yank him, chop up his leaves, and simmer them in oil for some gnarley brownies...
Want to see what DWC can do? Would you believe 1 lbs 6 oz in a phototron? It happened.

I've never made brownies with a male plant. How do they turn out. My male leaves went into the compost, but I do like brownies!
I am quality control for all my medical needs

herb_fellow said:
I've never made brownies with a male plant. How do they turn out. My male leaves went into the compost, but I do like brownies!
Click to expand...


if you shred the leaves and buds in a food processor then simmer them in vegetable oil, you should be able to extract alot of resin. The vegetable oil makes a perfect carrier for resins. Then when you make the baked goods you simply use the strained oil as a substitute for the normal oil you use in the batter. It should work fine for a male plant. When I touch this plant, my hands stink bad from the resin that rubs off.
Want to see what DWC can do? Would you believe 1 lbs 6 oz in a phototron? It happened. 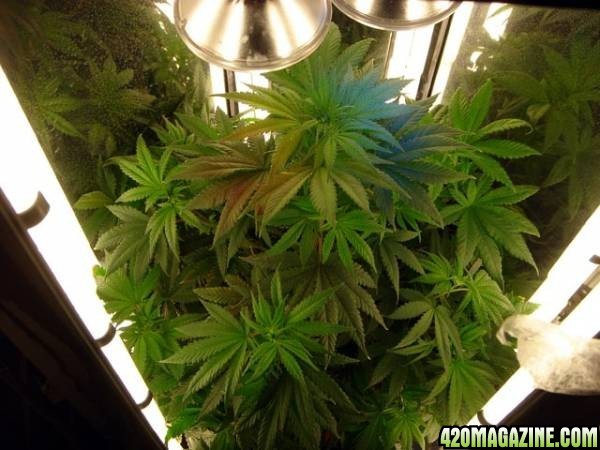 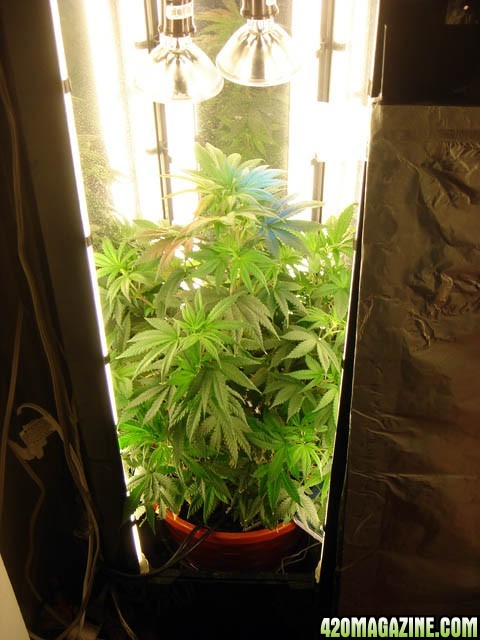 This shows you the height. 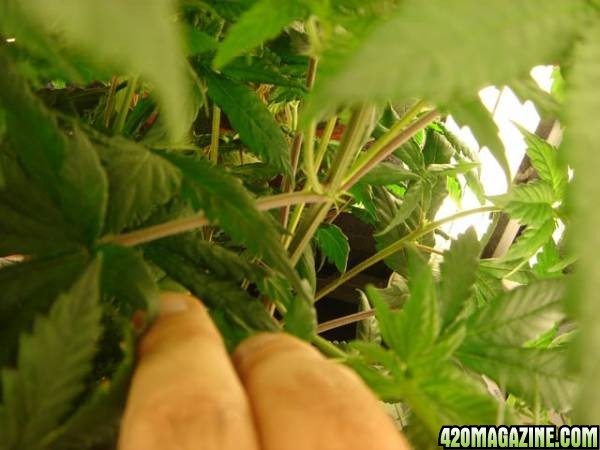 This is the middle height plant which is showing cones and pistil hairs. I apologize. It's hard to take photos inside the phototron. It screws up the autofocus. 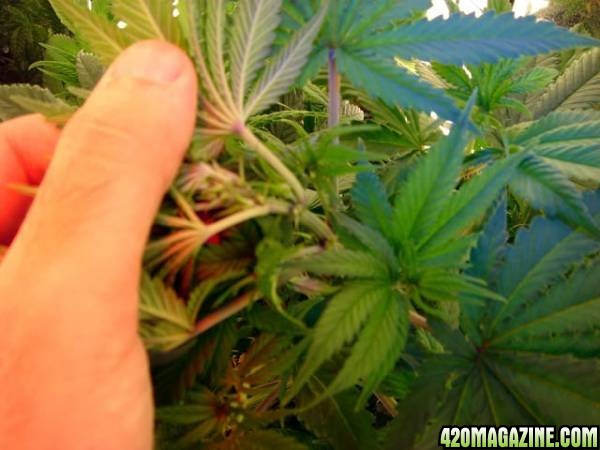 The suspected male plant. It's a real shame. This plant was huge. You can kind of make out the little balls forming. 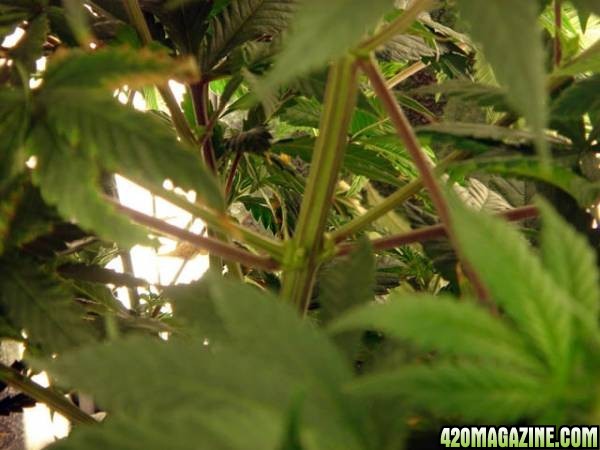 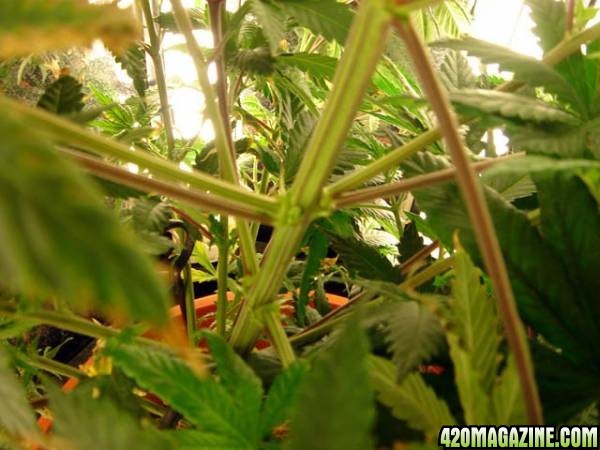 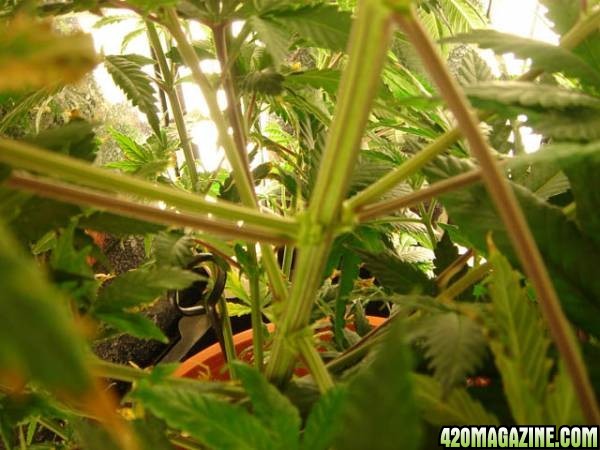 Suspected male ont he main stem pic 3.
Want to see what DWC can do? Would you believe 1 lbs 6 oz in a phototron? It happened.


The stem base is as thick as my thumb. It's crazy.
Want to see what DWC can do? Would you believe 1 lbs 6 oz in a phototron? It happened.

Those look like preflowers of penises. . .
Smoke buds with your buds
-Me

I'll chop out the male tonight when the lights come on. It sucks because 2/3 of the leaf mass is that giant male... =(

Oh well, I'll get a few bud from the middle plant at least, but it will look real bad when I chop that male out. I'll get photos...
Want to see what DWC can do? Would you believe 1 lbs 6 oz in a phototron? It happened.

Ok I chopped the male down. Outside the phototron I was able to inspect it and it most definitley was male. Anyway, It took me about an hour, but I made approximately 1 lbs of cannabutter. I took pictures of the whole process and right now the remaining water and butter is chilling in the freezer. After it solidifies, I'll remove the butter layer and maybe we'll make some brownies... hehehe

I took pictures of the plant I chopped down and the remaining two plants in the phototron. That huge male was cutitng off the light form the smaller plants big time.

Anyway, I restaked the female and the unknown sex NL plant, so they are centered. Hopefully the female will grow a bit during the rest of the flowering stage. the phototron is quite empty now. =(

After I'm finished decanting the cannabutter I'll post the pictures. hehehe
Want to see what DWC can do? Would you believe 1 lbs 6 oz in a phototron? It happened.