At least 150 people crowded the steps of the Sonoma County courthouse Thursday morning in Santa Rosa, one day after the lab of a well-known cannabis oil producer was shut down in a law enforcement raid.

Medical marijuana patients, advocates and longtime activists listened to speeches calling for an end to marijuana prohibition and a stop to the criminalization of the people trying to work within California's medical marijuana laws.

People carried signs with slogans like "We are patients, not criminals." They chanted "Free Dennis Hunter," the man behind the CBD Guild line of well-known products infused with cannabis oil that are sold at dispensaries across the state.

Martin Lee, with a Sonoma County organization called Project CBD, told the crowd that the law enforcement action against Hunter and his company was "attacking the entire community of patients."

"What has happened within the last 24 hours is devastating," Lee said.

Sarah Shrader with Americans for Safe Access' Sonoma County chapter said she was disappointed that potential civil code violations at the business were being used to criminalize a business trying to lawfully make medicine.

"It's time to stop raiding our providers and hurting our patients," Shrader said.

Hunter, 43, of Rohnert Park was being held on $5 million bail after police took him to custody Wednesday on suspicion of manufacturing a controlled substance.

A lawyer for Hunter's company, Joe Rogoway, said that the arresting charges unfairly characterized his work "as if he had a meth lab."

But Rogoway and a company spokesman said the method used to extract oil employs carbon dioxide and is a safe. 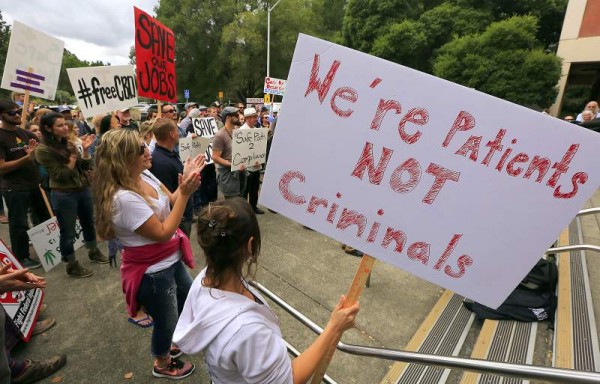