Marijuana Dispensaries Can Continue to Operate

Redding City Council will not appeal a judge's ruling that rejected the city's request for a preliminary injunction on medical marijuana storefront collectives.

The decision, reached tonight in closed session, means the city dispensaries can continue to operate.

"The law in the state of California is messed up - and that is an understatement," said Mayor Dick Dickerson after the meeting. "Things are so fluid that it's so hard to know ( what is next ). If Judge Baker had made his ruling eight or nine days earlier, I think it would have been a different outcome."

Only about six of those said they planned to address the council.

They were not in attendance to proclaim victory over the city, they said.

"I want to keep up the support for the people that truly need the medicine," said Pamela Bruce, a Redding resident.

A lone participant in a demonstration circled City Hall on his bicycle, waiting for other medical marijuana supporters to arrive for a rally. About 10 people, including those apparently opposed to medical marijuana dispensaries, eventually showed up. It was punctuated by a shouting match that broke out between two people over some harsh words exchanged on Facebook.

The event, called last Friday by James Benno, was to start an hour before the 6 p.m. City Council meeting to show support for last week's court ruling, striking down the city's ban on storefront collectives. The council is being briefed tonight in closed session about the case. It could decide to appeal the ruling.

Cities are in a fog over how to regulate the burgeoning industry, given a series of conflicting court rulings.

There has been some blame going around over who mostly bears responsibility in this case -- from the city attorney's office for its legal advice to the council to state lawmakers for the ambiguity in state law on the issue. 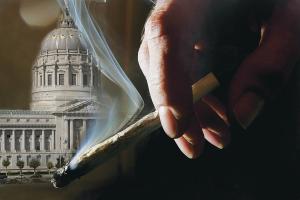 4
Ruling On Pot Shops Slated; Decision Likely To Be Appealed