Throughout the 30s and 40s marijuana was presented as the scourge of the western world, despite the fact that most people had no idea what the plant actually was, or what it was used for. The reasons for initially banning it are complicated, and have little to do with the effects of the drug itself, but the widespread ignorance regarding marijuana meant that scare tactics were successfully used in a series of propaganda films warning parents against the devil weed. And by 'scare tactics, I mean complete and utter fabrications. As Andrew Kavasilas, a licensed hemp grower and secretary of the fortuitously-named Australian HEMP Party told me during an interview for another article, "80 odd years of propaganda is hard to unravel." And while it may take years to step back the damage done by the spread of such misinformation, we owe it to ourselves as a society to laugh at the ridiculous messaging in those early propaganda films. Let's start with the most infamous one.

Reefer Madness (1936)
This film was financed by a church group - never known for their subtlety - and purported to show kids the dangers of marijuana. Dangers which seemingly include a hit and run, turning into a violent rapist after a single hit from a joint, and a particularly humorous scene involving a manic young woman in psychosis, tripping wildly and playing the piano like a freight train. There are multiple instances of weed-fuelled murder in 'Reefer Madness', and if I was impressionable when I first saw this film, just the unpredictable effects of the drug - anything from wild strip-tease hallucinations to mind-reading abilities to suicidal tendencies - would definitely have made me steer clear. The film ends at a high school PTA meeting with a principal warning the shaken parents that "the next tragedy may be your daughter, or your son, or yours, or yours, or (dramatic point to camera) YOURS!

The film had an ironic afterlife in the '70s, when the founder of the National Organization for the Reform of Marijuana Laws (NORML) came across an old print of the film, and hosted campus screenings in order to raise money for his pro-marijuana cause. More interestingly, Robert Shaye, who founded New Line Cinema, noted the film was out of copyright, and distributed the film nationally through New Line - the company's earliest major financial success. It's funny to think the first Ninja Turtles film was financed by '30s propaganda. Cue munchies joke...

Marihuana (1936)
"Weed with roots in hell" screams the poster for this over-the-top flick. "Weird Orgies. Wild Parties. Unleashed Passions." Geez, for an anti-marijuana film, the poster is doing a really good job at selling the drug to kids. There is also a needle, for some reason, with "misery" written on it, while the main image shows a man in a tie, collar and vest surrounded by drug paraphernalia injecting a well-dressed woman with some evil substance. And that's just the poster! The film itself details the downfall of young Burma and her friends, who meets some guys at a bar and follow on to a party. The girls (accidentally) smoke weed, go skinny-dipping, and Burma brashly has sex on the beach. One of her friends drowns, she gets pregnant, and her boyfriend is forced to take a job unloading shipments of smuggled drugs, because what other money-making options are there when your girl is pregnant? Burma's boyfriend is soon shot by the police, she gives up her child for adoption, and turns to heroin... There's also a kidnapping plot with a delicious twist at the end, which I won't spoil - mainly because it is far too silly to go into.

Assassin Of Youth (1937)
A Puff. A Party. A Tragedy. So goes the tagline for Assassin Of Youth, the least interesting of the early propaganda films. Involving the framing of a young girl about to inherit a fortune - if she fulfills a morals clause in the will; i.e. no involvement with that devil drug marijuana - the film follows an assiduous journalist who tasks himself with proving Joan's innocence, and busting open a dangerous marijuana-dealing gang who are responsible for fueling a series of crazy all-night drug parties. Violence in town gets out of hand, because we all know if there is one thing marijuana users are prone to, it is excessive violence, but don't worry, Joan is cleared by the courts of any involvement with marijuana - and then marries the journalist, because why not?

She Shoulda Said No! (1949)
This film comes a decade after the first blast of propaganda films, and was repackaged and renamed numerous times, its title becoming more ridiculous with each subsequent renaming (Wild Weed; Marijuana, the Devil's Weed; The Story of Lila Leeds and Her ExposÃ© of the Marijuana Racket; and The Devil's Weed were all alternative titles over the years). Interestingly, this film was made after its star, Lila Leeds, and her boyfriend - famous actor Robert Mitchum - were busted smoking weed at her house in the early hours of the morning. As it was Leeds' house, she was charged with a possession felony and sentenced to 60 days in jail. She struggled to find acting work after this, and so was forced to take this role - ostensibly as both a mea culpa and as a public service, warning other kids of the dangers of the drug. But, as she later admitted, it was her only job offer. "I took it; I was broke." The film itself shows Leeds become sexually promiscuous, lose her job, and begin selling drugs, before a correctional officer takes her on a tour of various psychiatric wards and she is scared straight. Phew! Before screenings a notice crowed: "If its presentation saves but one young girl or boy from becoming a 'dope fiend' — then its story has been well told." It probably didn't.

Hemp For Victory (1942)
As if to completely confuse and undo the work that had been done up until this point, in 1942, the U.S. Government financed Hemp For Victory, a pro-weed film which extolled the many virtues of growing hemp. Granted, this was a war-time effort, when local production of basically everything was in scant supply, and therefore makes a lot of sense when considering the multiple practical uses of hemp, but its Grow Dope For America messaging is rather hilarious when you considering the governmental onslaught against the same plant during the previous decade. Then again, as we have learned over the past few weeks, consistency isn't the U.S Government's strong suit. 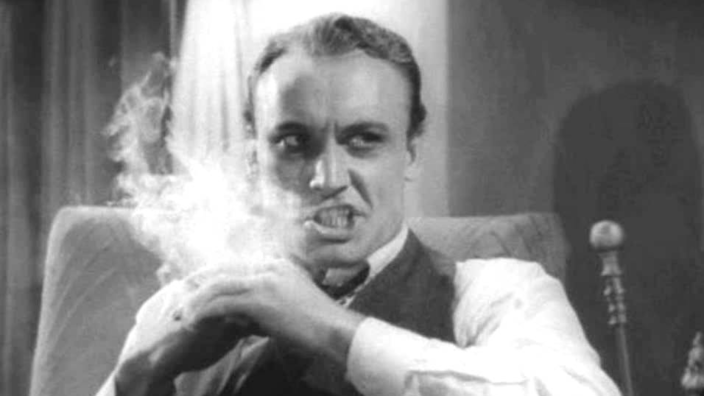