Vancouver's board of variance, which typically hears appeals on garages and back porches, found itself in unfamiliar territory Wednesday as it considered appeals from pot pedlars for relief from city decisions to snuff their trade in marijuana.

Proponents for Cannpassion, Van City Medicinal Society, B.C. Pain Society and Weeds Glass and Gifts were the first in a long line of applicants slated to appeal their rejected bids for medical marijuana business licences.

Over the next nine months, 58 other applicants are scheduled to present their cases to board members.

Up first was a trio of appellants who spoke for Cannpassion. They looked every bit like average businessmen, apart perhaps from the full face tattoo sported by one.

The trio told board members the dispensary had been open for four years and they said their appeal had written support from nearly two dozen neighbours.

The dispensary, at 2943 Kingsway, is a popular spot with a 4.7 out of five rating on Leafly.com, a marijuana enthusiast website. The store boasts daily specials, including cheap ounces of bud on Sunday Funday and $2 grams on Toonie Tuesdays, according to Leafly.

The proponents explained to board members that their shop was refused a licence because it was too close to a nearby school. Under the city's regulations, dispensaries cannot be within 300 metres of schools, community centres or public gathering places.

Cannpassion's proponents argued the dispensary is more than 300 metres away from the school on a door-to-door basis, but staff explained the city's regulations call for surveys to be done from property line to property line.

Their appeal was denied in a unanimous vote.

"I do sympathize with the dilemma this applicant is in, but I do not support this appeal," said board member Martha Welsh before she led the round of voting.

As the afternoon proceeded and appellants were denied one after another, it became clear board members were strictly applying the city's regulations. Arguments appealing to the medical benefits of marijuana were of little use at the technical board.

SWED (short for Smoke Weed Every Day) at 3450 East Hastings was among the three other dispensaries making appeals Wednesday, all of which were denied. The store used to be Weeds Glass and Gifts, a chain of shops led by outspoken marijuana entrepreneur Don Briere.

Adam Blender explained that SWED spun off from Weeds over "a difference of opinion."

"It seems like the decision was made before we got here," Blender said, adding his next step would be to look for a different spot in the city to set up shop. But he said those are getting hard to find.

When Vancouver announced last summer it would begin regulating marijuana dispensaries, staff soon found themselves sorting through 176 applications for business licences. By that time, well over 100 pot shops had sprung up in the city, outnumbering BC Liquor Stores fivefold and becoming a numerical rival to Starbucks outlets in Vancouver.

Just 14 applications met the city's zoning requirements, and staff expected to have those shops legalized by the end of this month. Another two dozen or so were clustered too close to each other and staff continue to sort out that problem.

Three quarters of the applications – some of which came from storefronts already selling product – were swiftly rejected. Some proponents declined to contest the decisions against them, but 62 others filed appeals.

Also among the first round of appeals was Van City Medicinal Society at 1299 Kingsway. The society describes itself as a non-profit organization dedicated to education and medication for people seeking relief through cannabis. Its proponent did his best to pick apart the fine points of the city's regulations, but his appeal was denied.

The B.C. Pain Society, at 2908 Commercial Dr., was the fourth dispensary slated for board review. The society is well-known for having installed Canada's first pot vending machine.

Vancouver is not alone in dealing with a budding crop of pot shops and jurisdictions across B.C. are responding differently to the businesses. City staff in Victoria have floated ground rules for medical marijuana shops including a $5,000 licensing fee, while Kimberley is starting to allow dispensaries. Meanwhile, Port Coquitlam, Abbotsford and Surrey have taken a harder stance against shops that have popped up illegally, opting instead to force them to close. Other cities like Burnaby are simply joining other jurisdictions across the country that are watching how Vancouver's regulation experiment plays out. 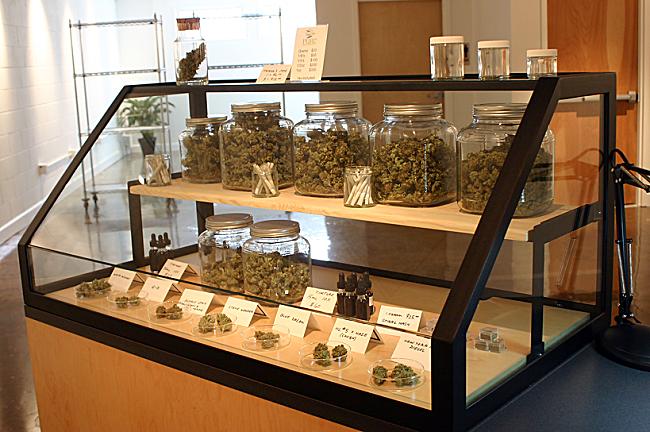 By charging outrageous licensing fees or telling the shops to move, they are discriminating against those in need of medical mj, not the shop owners. How far do people with chronic illnesses have to walk to get to their supplier? What would the fees be if it was a grocery store?