After a six-month whirlwind journey through the legislature last year, a strain of medical marijuana called "CBD oils," or "hemp oils," passed into North Carolina law. It was very specific — the law legalized the research and study on hemp extract for the treatment of seizure disorders.

Five months after becoming law, some are calling it "useless."

"We've tried everything," Abby said. "I think CBD oils are my daughter's last hope. I hear stories of how they work wonders for kids in Colorado. I don't know why I can't have them for my daughter here in North Carolina."

CBD oils (which stands for cannabis oils) are an oral medicine made from marijuana, with virtually all the THC removed. THC is the stuff in cannabis that gives you a euphoric feeling — no matter how much CBD oil you might drink, you wouldn't get high.

The legislation brought many North Carolina families hope, thinking they could get severely sick children involved in clinical studies of this medicine. CBD oils aren't FDA-approved, but anecdotal stories of success have been well-publicized in states where the medicine is fully legal.

WBTV did six months of stories on CBD oils last year, even going to Colorado. Our continuing coverage won a regional news Emmy.

Abby says she was full of hope when she watched the Governor sign the law, thinking Betheny would have a chance to be on the medicine soon.

Now she says she feels cheated.

"I followed the path the bill took through North Carolina legislature," Abby said. "I watched the Governor sign it. I saw all the sick children around him. I was so happy that day. I thought this drug was going to help save my daughter. But now I'm just frustrated."

"The law has little or no value," says Dr. Rod Radtke with Duke University Medical Center. "It didn't accomplish a whole lot. In terms of public relations, it demonstrated an interest for this population of people who are in great need and supported research in the area, but it really didn't accomplish anything in terms of making CBD available to the public."

Dr. Radtke is a Professor of Neurology who works with adults who suffer from epilepsy. He says he has patients who chose to move to Colorado and understands people wanting to do everything possible, but ultimately comes at it from a more intellectual perspective. More research, he says, is needed.

"We understand the families or patients wanting access to everything to get better," he says. "But from the scientific perspective we would prefer it to go through the normal channels that other products have done to show it's effective and safe."

Duke University Medical Center is looking into starting a trial soon, says Radtke. It will be small.

"Tens of people, not hundreds," he said.

Wake Health quietly started a study in December, but has no results it's yet willing to share. UNC Healthcare says it will begin three studies soon. East Carolina says it has no plans in the works.

Important to note, all studies will be of a pharmaceutical version of CBD oils called Epidiolex. It's a manmade medicine produced by GW Pharmaceuticals. Epidiolex is touted as easier to get than actual CBD oils and has been approved for investigational study by the FDA.

It also means not one center is studying any version made from the marijuana plant.

"I don't like that my government tells me I can't give my daughter something I feel confident is going to save my daughter's life," she says.

When we asked Governor Pat McCrory's staff about the law's overall lack of action, his staff declined an interview saying he would talk "when there was an update to relay".

His office did issue a statement however, saying, "We opened the door by signing this legislation, but we'll have to let each university speak for themselves as to why or why not studies are being done at this point."

The statement did not address families disappointment.

"I feel like I was promised things I didn't get," says Childers. "It makes me so angry I get chill bumps about it."

Don't give up hope yet, says Representative Pat McElraft, the original sponsor of this bill.

"I'm working on it," says McElraft, who represents District 13 along the North Carolina coast. "I want to help modify the language of this bill to make it effective. I'm talking with people who can help us make this law better. I will do all I can — I want the children in our state whose families want to try CBD oils, to be able to try the medicine and see if it helps." 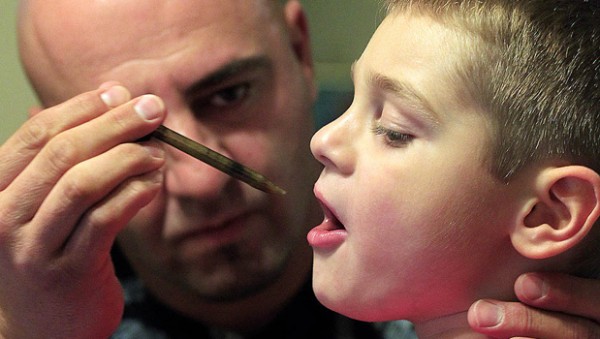