Colorado - When recreational marijuana goes on sale for adults age 21 and older next year, the most expensive buds in the Roaring Fork Valley will likely be in Carbondale. Voters there passed a 5 percent tax on both retail and wholesale pot this month. And, new statewide taxes will increase the price even more. As Aspen Public Radio's Marci Krivonen reports, some Carbondale marijuana businesses are preparing for higher-priced pot.

Medical Marijuana Centers of Colorado is a medical pot shop in the center of downtown Carbondale. The store's owner, HP Hansen, is preparing to go retail. "I'll probably put a wall here and I have an old antique wall from the bank of Carbondale that I'll probably use right there," he says as he gestures around an open room. The medical products already sold in his store will stay put. In a different room, retail marijuana products will go on display. The shop will even have separate cash registers.

The rules for selling medical and retail marijuana are different. For one, the retail product can only be sold to adults 21 and older. To get medicinal pot, you've got to be at least 18 and register with the state. Another big difference will be the price. Hansen says taxes will make retail marijuana more expensive than in other local towns that allow it. "From the recent election, now 25 (percent) from the state, 10 from Carbondale, plus the 8 and a half, it kind of shoots the hell out of a $200 ounce and makes it about 280 bucks," Hansen says.

More than two-thirds of voters in Carbondale approved a 5 percent tax on retail and wholesale marijuana, alike. Carbondale mayor Stacey Bernot says the taxes, along with other local rules for retail marijuana, are meant to put some controls on the industry early on. "We wanted to be very proactive with the retail side of it. With medical marijuana, that seemed to be a very reactive situation for our community, when all of a sudden a number of dispensaries popped up in town and were operating and we didn't have the regulatory framework to really know what we wanted, so there was a lot of unintended consequences," she says.

Two years ago, a dozen medical marijuana centers were operating in Carbondale, making the town well-known for its pot. The same year, the town board passed a moratorium, preventing new medical businesses from opening. Now, just three medical pot shops are open. As these stores transition to include retail marijuana, Bernot says the Town is trying to avoid things like youths and vulnerable populations using the drug. New regulations and taxes are also meant to keep the number of retail shops at a manageable level. She says the taxes will fund the extra staff time it takes to regulate the new industry.

"We just wanted to make sure that we were able to cover the cost associated with it because we have a lot of services and programs that we provide to the community and regulating retail marijuna isn't the only thing, so we wanted to make sure we had a funding source." In addition to the taxes, the town board will also regulate what's allowed in public and cap the number of retail shops in town at five, until 2015. Back at Medical Marijuana Centers of Colorado, HP Hansen shows off his products. He says many medical centers have closed because it's a tough business and additional taxes won't help. Hansen says, In an ironic twist, people might actually head Upvalley to save money.

"You know, for the difference in price, you can get on a bus and go to Aspen and get it cheaper (laughs). It's crazy, to think about going to Aspen to get anything cheaper, but that may well be the case." In Aspen, retail marijuana buyers will see the same sales tax applied to other products. Downvalley, if Glenwood Springs allows shops, the sales tax would be 8.6 percent. Glenwood's City Council is scheduled to take up the issue later this week. 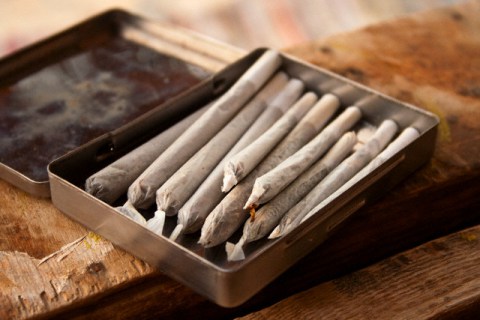 T
For Carbondale, A Decisive Day On Pot Rules