I harvested the top cola and most of the side buds off my little plant and pollinated the bottom two bud sites. 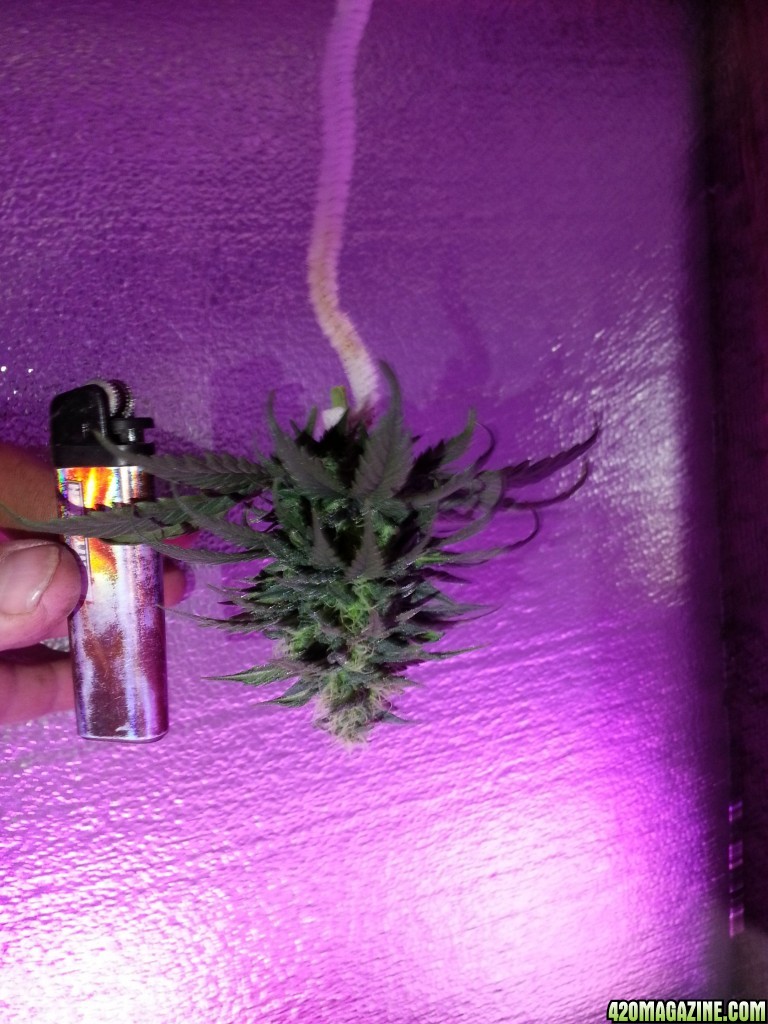 The plant took about a week to show new leaf growth after a switch to 18/6 lighting and more nitrogen in the fertilizer, along with a transplant to a larger container. 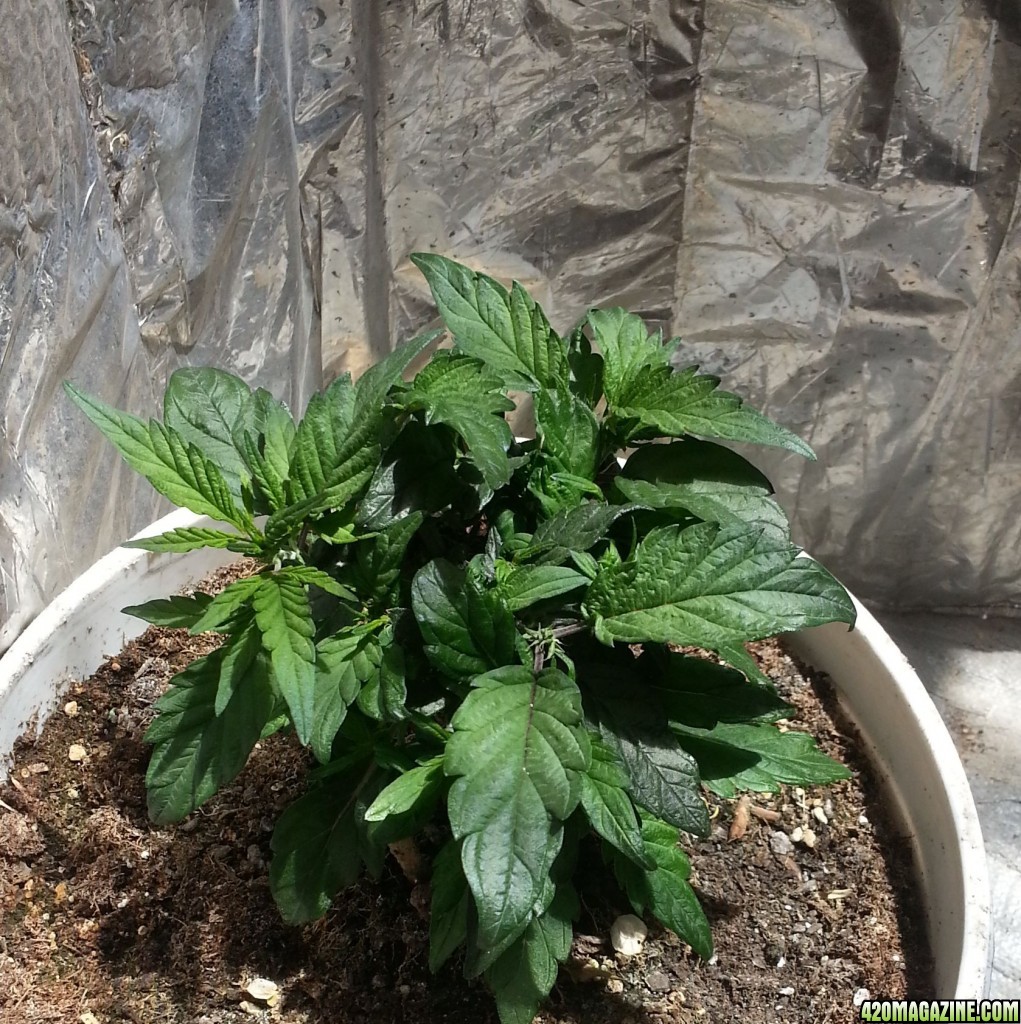 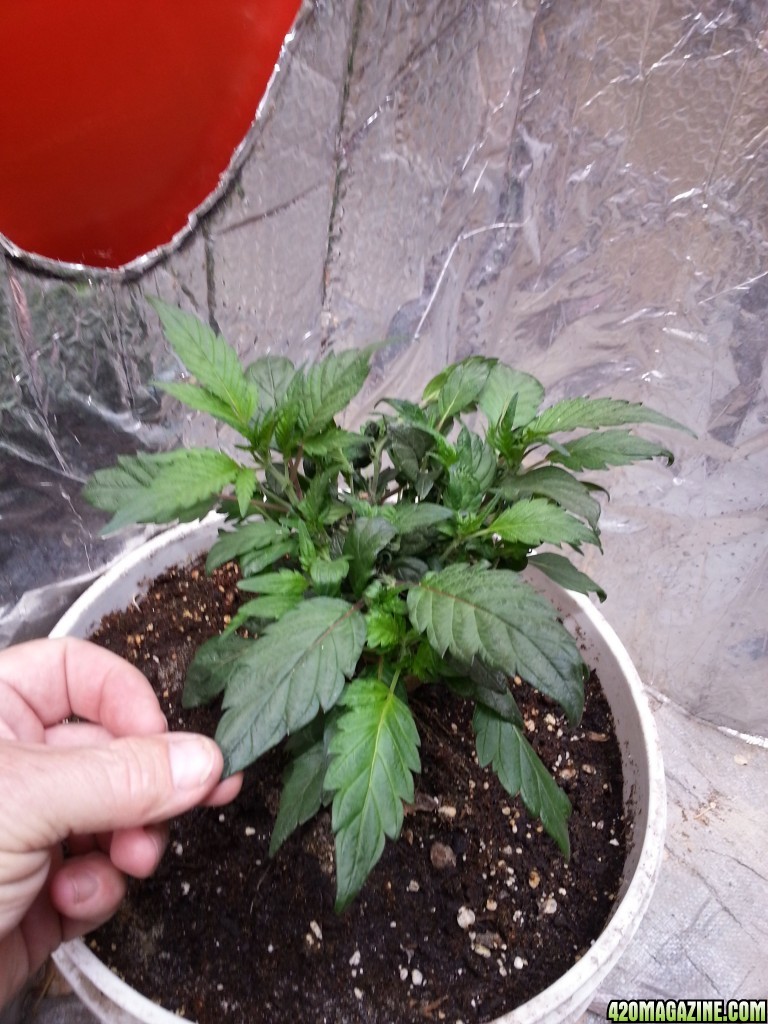 It's tasting natural sunlight now, and stretching upward. I want to get enough growth to take several clones, this is a nice strain. 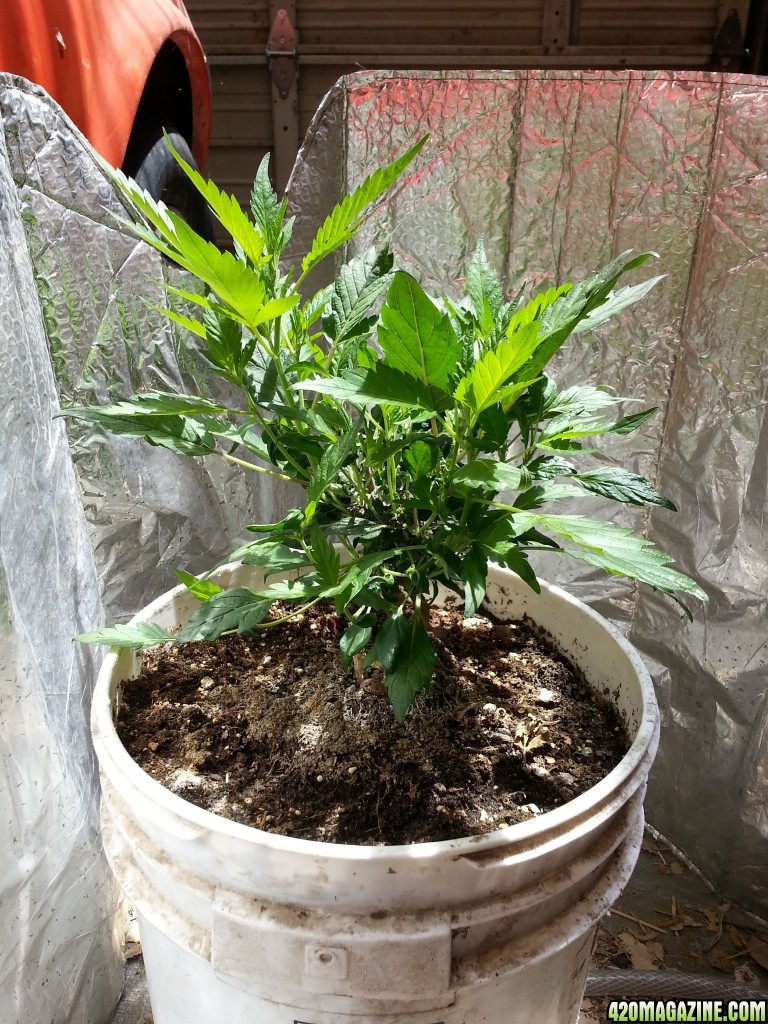 I want to get six nice healthy females growing in pots so they can go outdoors but come in in case of harsh weather.
And the earth brought forth grass, herb yielding seed after its kind, and tree bearing fruit, wherein is the seed thereof, after its kind; and God saw that it was good. (Genesis 1:12)
P

Here's another photo- stretching quite a bit, and starting new female flowers. 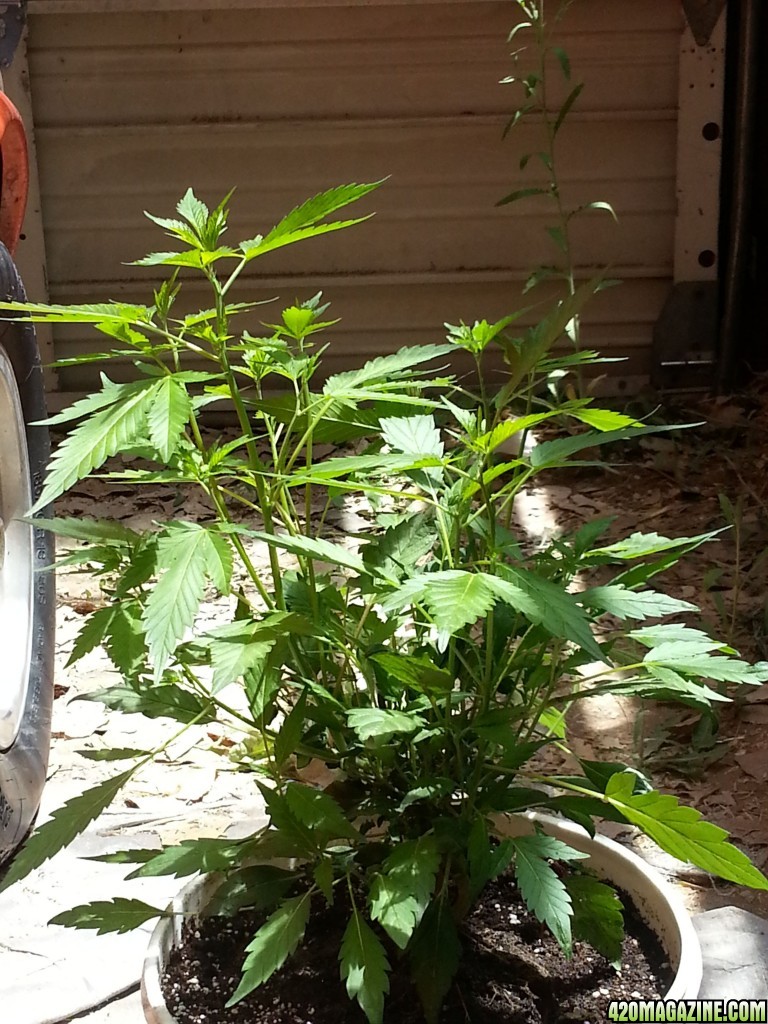 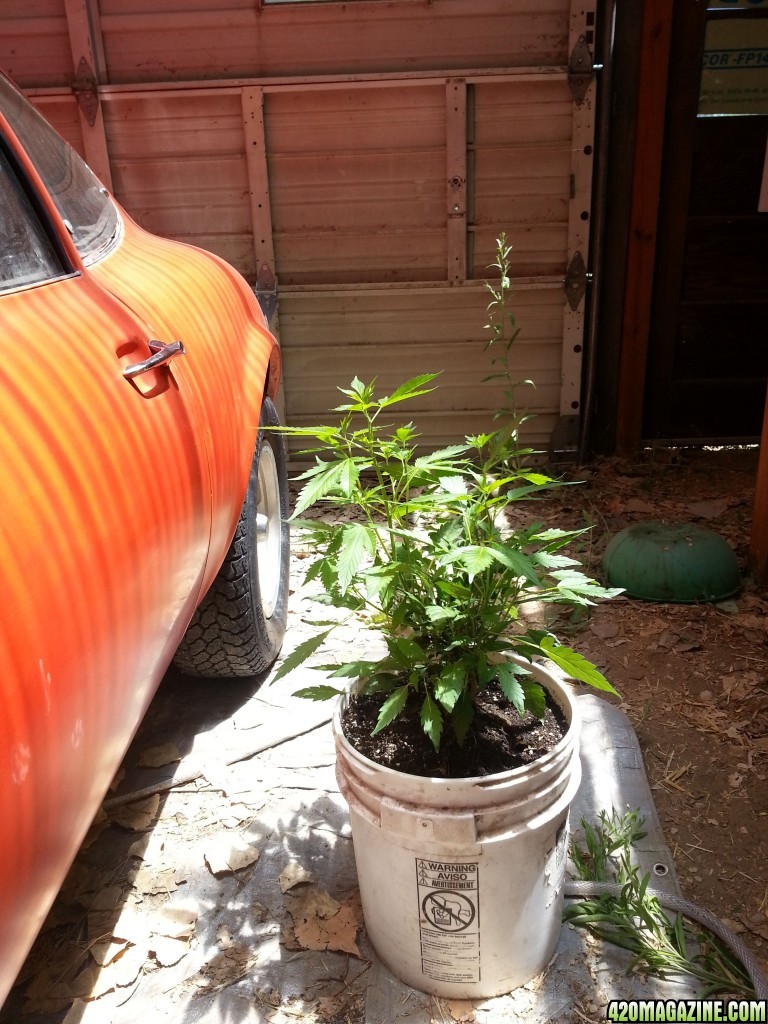 I have a couple of nice Golden Goats growing, the larger of which is definitely a female. I'll stick in a photo later.
And the earth brought forth grass, herb yielding seed after its kind, and tree bearing fruit, wherein is the seed thereof, after its kind; and God saw that it was good. (Genesis 1:12)
P 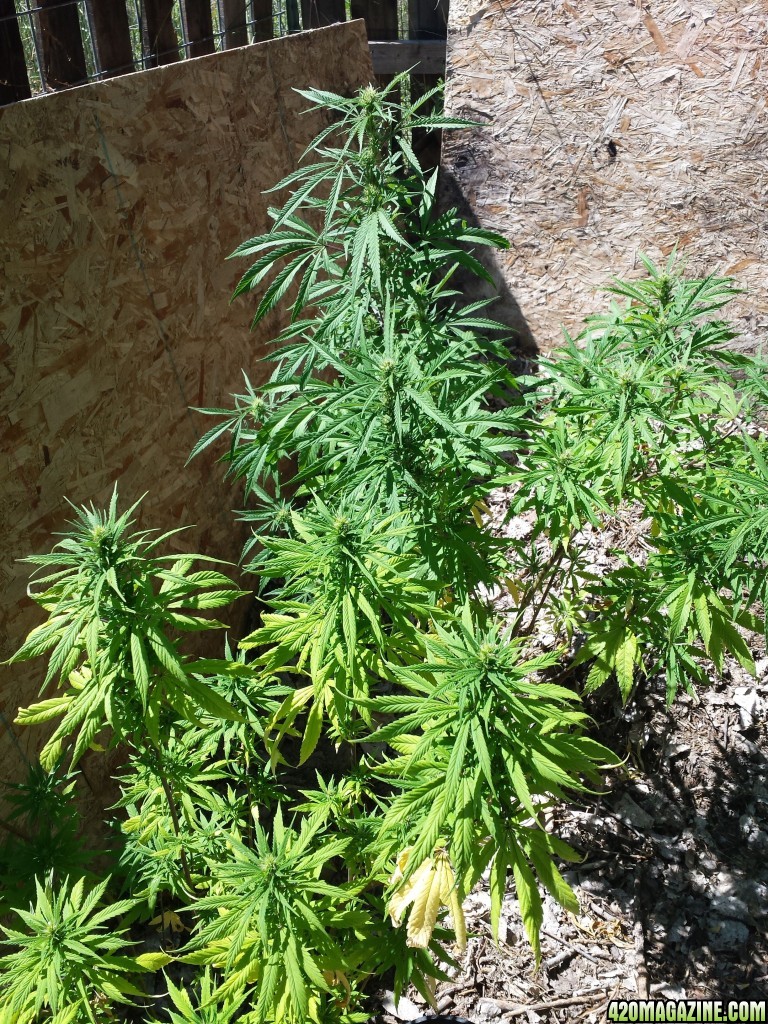 The JF was not really happy in the bucket once I moved it outdoors. Too much temperature variation, and the moisture levels in the bucket were too variable as well. It's sort of heart stopping to go out midday and see the entire plant wilted and drooping.

So I stuck it in the ground next to the golden goat sisters. The JF is getting a little yellower than I like, so I will give it a taste of potassium nitrate this evening. I really need new pictures, cause the buds are getting really pretty in the week or so since the photo.

We're getting nighttime temperatures into the low fifties and I'm hoping to see some purpling. Both plants have been pollinated with purple hash plant pollen, hoping to get a decent supply of seeds for next year. The GG was planted into the ground about a month before the JF, and it has grown vigourously and well- nice dark green, strong stems, lots of buds. I bent the main cola over to encourage multi bud sites, and it seems to have worked. I'll take some photos today and post them later.

The JF has been sorely tested, being re-vegged and then tormented with drought and heat, but is budding well.

The Goat is at the top of the photo, and is actually two plants from two seeds. They were so close together that I decided not so separate them but to just plant the whole works.
And the earth brought forth grass, herb yielding seed after its kind, and tree bearing fruit, wherein is the seed thereof, after its kind; and God saw that it was good. (Genesis 1:12)
T

Nice plants, totally opposite environment and plants yo mine.

I am half way around the world. Check out my Thread " Hot climate Grow "

I ll Kept on visiting your post, Really nice plant you got there.
Humble Grower

Thanks, Thai, I'll surf thy thread. 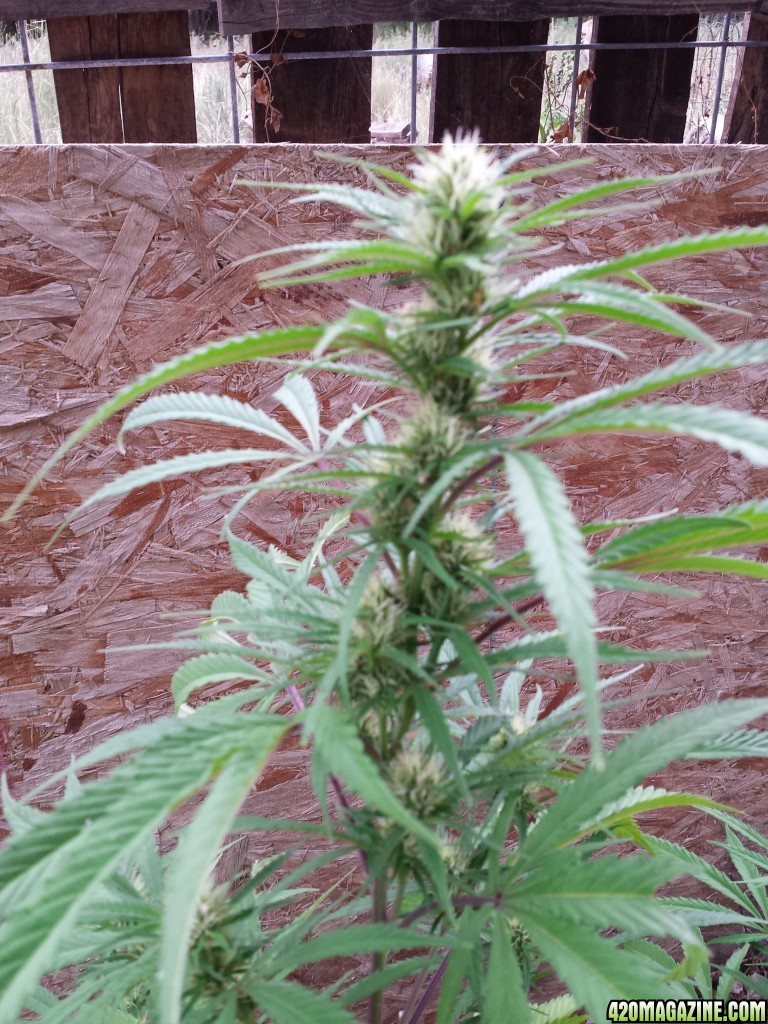 The main cola on the golden goat 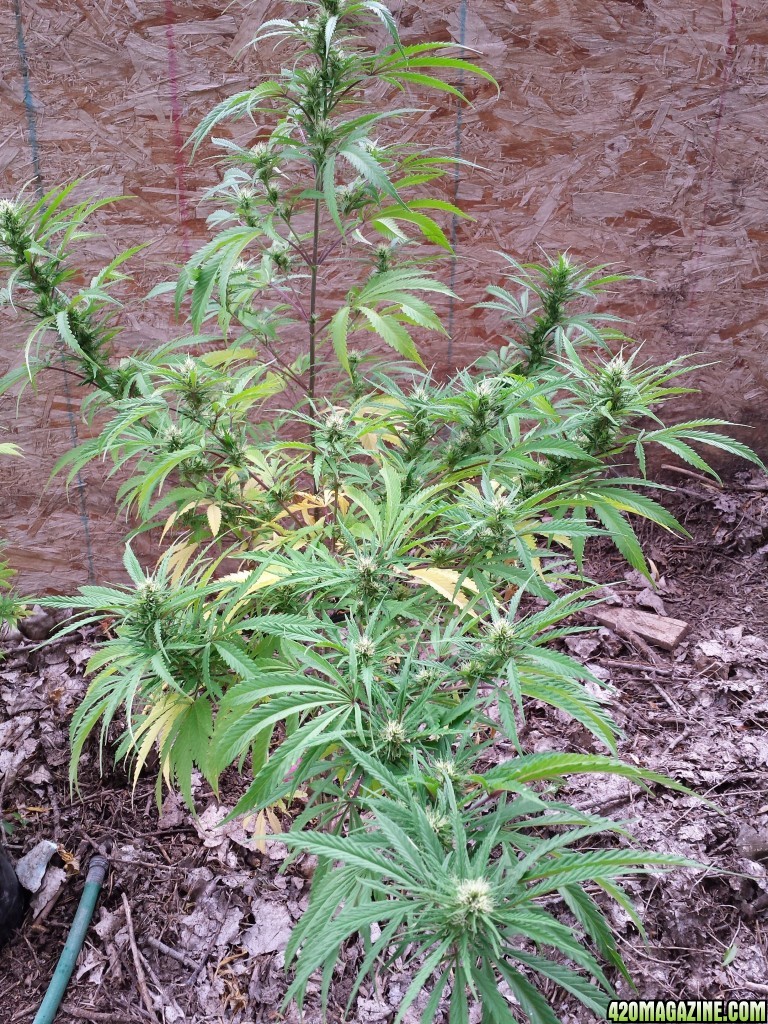 Golden goat. The main cola is sticking up out of the photo. The grasshoppers have been mildly interested in the plants, so I spray them with organic approved soap insect repellent 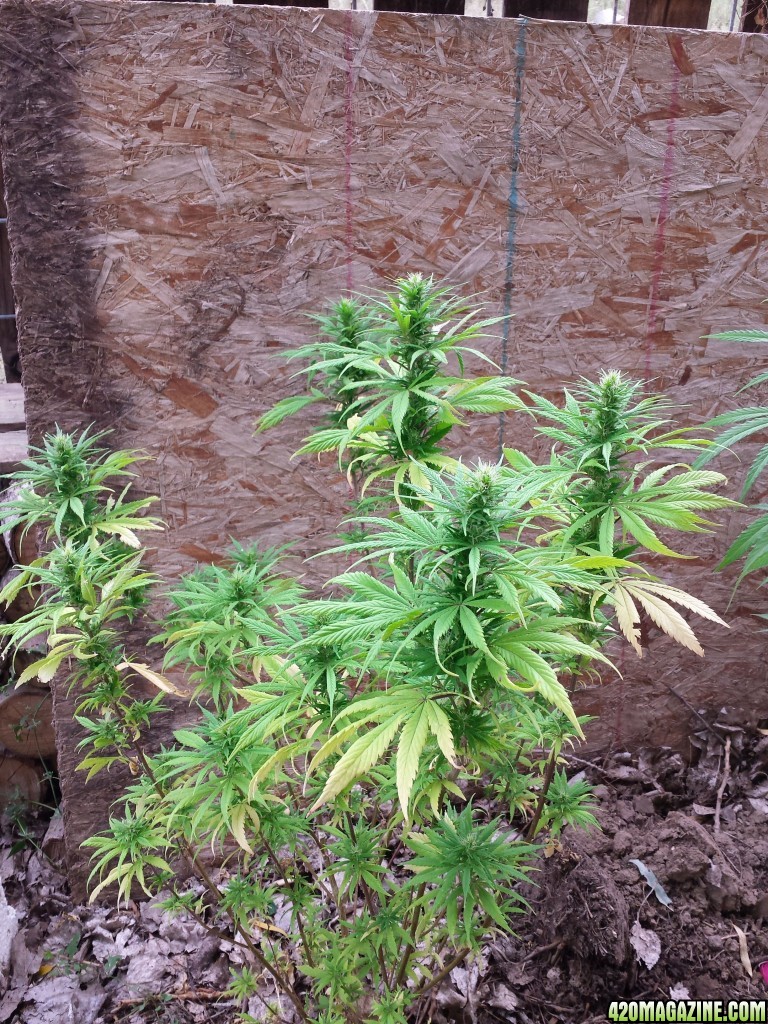 The Juicy Fruit. This stuff was very tasty before I revegged it, so I'm hoping for a nuce nugget collection this time around.
And the earth brought forth grass, herb yielding seed after its kind, and tree bearing fruit, wherein is the seed thereof, after its kind; and God saw that it was good. (Genesis 1:12)
P

For the detail oriented- the pollinated sites on the JF first flower cycle did not make seeds- didn't give then enough tine, I suspect.
And the earth brought forth grass, herb yielding seed after its kind, and tree bearing fruit, wherein is the seed thereof, after its kind; and God saw that it was good. (Genesis 1:12)
P 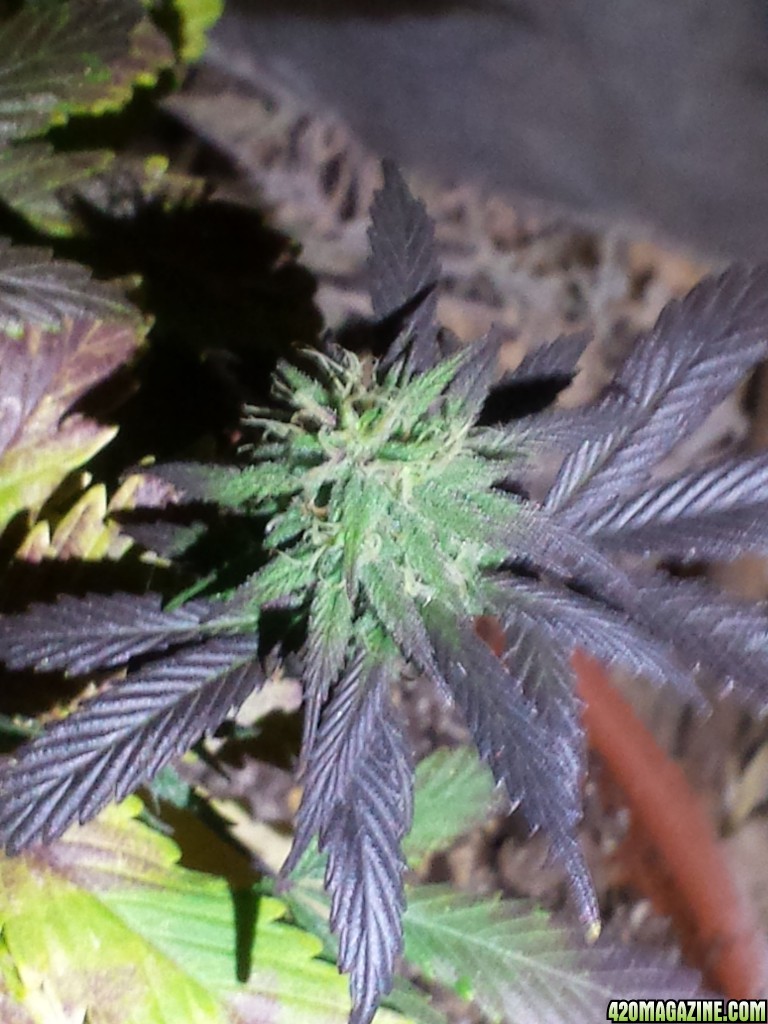 Purple bud. This is thought to be Juicy Fruit, but grown under lights with added UV from a lizard lamp. This stuff is very sticky and has a fruity watermelon aroma. Way too potent to smoke more than a pinch at a time, at least for this old lightweight... 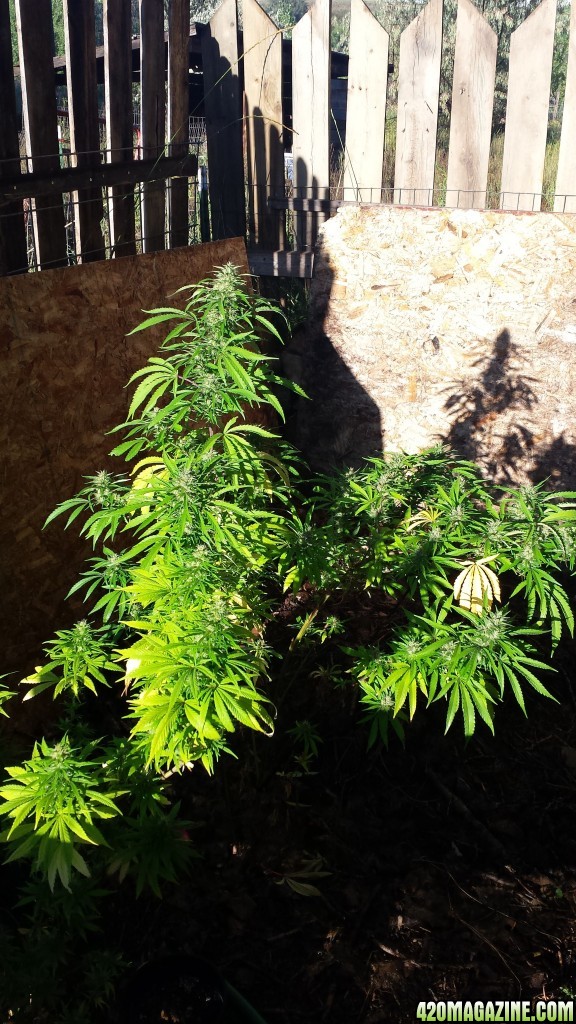 Frosty buds. I've started harvesting the revegged JF and the goats. The Goat is much more resinous, and the buds are heavier. I hope I got some seeds- I pollinated with PHP (purple hash plant) so maybe...
And the earth brought forth grass, herb yielding seed after its kind, and tree bearing fruit, wherein is the seed thereof, after its kind; and God saw that it was good. (Genesis 1:12)

Please head over to the 420 Strain Reviews forum and post your smoke report there too.

In the future, whenever you complete a journal, please use the Report Post feature found at the bottom left of every post, so we can be alerted to move it for you.