Following the legalization of marijuana in nearby Massachusetts, Rhode Island lawmakers have proposed the Cannabis Regulation, Control and Taxation Act – a bill legalizing recreational cannabis use for those age 21 and over. Though this will be the third year that a bill like this has been introduced to the state assembly, some lawmakers expressed confidence that reforms may pass in the upcoming legislative session.

State Rep. Scott Slater D-Providence, proposed the bill to the state assembly alongside State Sen. Joshua Miller D-Providence. The law would include mandatory product testing and labeling, restriction on advertising, funding to law enforcement, limits on THC quantity per product and mandatory reviews for all sale products. Additionally, the bill would allow for cities and towns to have some control over the operation of marijuana establishments within their jurisdiction by voter approval.

Most Democrats and a few Republican representatives support the bill, Slater added. While Gov. Gina Raimondo has yet to publicly supported the bill, she has not commented against it either, Slater said. Slater expects that Raimondo will be influenced to endorse the bill if it follows proper regulations and garners support of grassroots groups.

Jared Moffat '13, director of Regulate Rhode Island – a coalition of organizations, citizens and community leaders working to support legislation to regulate and tax adult marijuana use – has worked closely with lawmakers in the Rhode Island General Assembly to lobby for cannabis legalization. "On the heels of Massachusetts, Maine, Nevada and California, we think this year is a really great opportunity for us to get the bill passed," Moffat said.

"It's certainly not a guarantee, but we do have more momentum than we've ever had before," Moffat said.

Public approval of marijuana is at an all-time high, according to a 2016 public opinion survey conducted by the Taubman Center for American Politics and Policy. The poll showed that a strong majority of Rhode Island voters – 67 percent – favor the state's current law which allows cannabis use for medicinal purposes. The same study found that 55 percent of voters support legislation to regulate and tax recreational cannabis use.

"With Massachusetts right across the border, it makes sense for Rhode Island to get its system running at the same time," Moffat added.

Moffat, former president of Brown's chapter of Students for Sensible Drug Policy, described student activism as a key element in the process of legislative reform.

Moffat said he worked as a student to pass Rhode Island's marijuana decriminalization bill in 2012, removing criminal penalties for possession of an ounce or less of marijuana. Additionally, he continues to work with current SSDP President Kathryn Duckworth '19 and other members of the group to campaign for legislation, run events and spread awareness of healthy cannabis use.

Nadir Pearson '19, a member of SSDP, is going one step further by creating a new club on campus – the Student Marijuana Alliance for Research and Transparency. SMART addresses public distrust of marijuana and in doing so, aims to change policies through community outreach, workshops and hands-on work with people in the industry, Pearson said.

"There's this big cloud of fear we are trying to dismantle," Pearson said. Cannabis legalization could uniquely benefit Ivy League schools like Brown, Pearson said, who advocates for inter-disciplinary research and instruction on cannabis at the university level.

"Every subject can involve cannabis, from biology to engineering," Pearson said. "Brown can be a place where we can open up the dialogue." 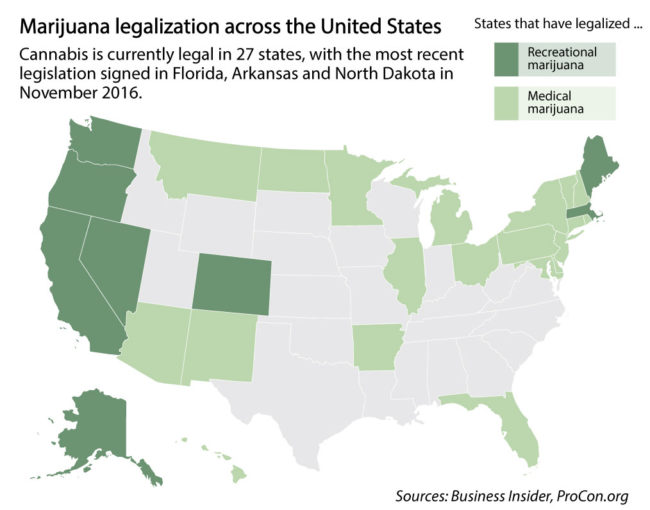