Rick Steves, the travel guru who was a key supporter of Washington's recreational marijuana law in 2012, arrived in Oregon Tuesday to kick off a 9-stop tour promoting the campaign to legalize pot. Steves, 59, of Edmonds, Wash., argued that marijuana legalization is a civil liberties issue that other countries have successfully grappled with. He pointed to the Netherlands' experience with pot as a prime example, saying that country's relatively liberal marijuana laws have not resulted in increased consumption. He took time before his first appearance in Portland to talk with The Oregonian about his views and his work. (This Q&A has been edited for length.)

What is your message for Oregonians?

Steves: For 15 years I have been involved and outspoken in the importance of drug policy reform, specifically taking the crime out of the marijuana equation. I really want to stress that I am not pro marijuana. I am anti-prohibition when the prohibition is causing more problems than the drug it is supposed to deal with. It's what our society learned after a very painful episode with alcohol in the 30s and we are learning about that now. It takes courage for states to go against the federal insistence on keeping a drug illegal.

I just feel very strongly that the laws that are on the books right now are counter productive. They are expensive. They are racist. They are based on fear and misinformation. This is not just my hunch. A lot of it might be counterintuitive but my experience is based on talking to people who have been dealing with the same challenges in other countries for the last two decades.

In Europe my friends tell me a society as has to make a choice: tolerate alternative lifestyles or build more prisons. And they always follow up that with this annoying comment that Americans lock up 10 times as many people per capita as they do. They say, "You guys are either inherently more criminal or there is something screwy about your laws."

A lot of the people that argue against us are assuming use will go up when you regulate, tax and legalize, but what every society has found -- and the track records bear this out — is there is no correlation between consumption and how strict the laws are.

The Dutch have the most progressive laws. They are famous for being loose on marijuana. They have, by every country's estimates, less than the European average marijuana consumption. Most Dutch people have never even smelled marijuana. It's just for bohemians, musicians and tourists. For the Dutch people, it's just not sexy anymore.

The governor of Colorado is in the headlines this week for calling the vote to legalize pot in his state "reckless." He said there's not enough data on legalization's implications to make an informed vote. Why not give legalization more time to play out in Colorado and Washington before moving forward with legalizing pot elsewhere?

Steves: Anytime somebody speaks out against taking the crime out of the equation of marijuana, the first thing a citizen should ask is what motivates this person who is saying this? Do they care about civil liberties or are they speaking up for some kind of an organization that profits from the status quo?

The Brookings (Institute) has concluded that things are going very well in Colorado after two years and none of the scare stories have panned out. Crime is down. Revenue is up. Teen access is actually down. There is no indication that there's any change in driving while intoxicated. All of that is really important.

Kevin Sabet, a leading opponent of marijuana legalization, visited the state last week. He argued that while most people who use marijuana won't become addicted, some will and that risk and the costs associated with it are enough of a reason to reject legalization. What do you make of that argument?

Steves: It's the same tired arguments and I always wonder what motivates these people? I think any citizen in Oregon, when they hear me talk or (Sabet) talk and try to encourage them to vote one way or another on marijuana should say: what motivates this person? Who is paying his plane ticket?

Can you answer that question for yourself?

Steves: I came down on my own penny. Nobody is paying me a penny for this. I could make a lot of money staying home and doing my travel work. This is a huge investment of my time and money.

What's your personal experience with marijuana?

Steves: I never smoked in America because I didn't want to go with the pressure until I went to Afghanistan and it just felt like this is a cultural thing to do, so I smoked a little in India and Afghanistan. I have smoked very casually ever since I was a student. It's not a big deal in my life. I just really believe in civil liberties. I am a tax-paying, kid-raising, church-going, hard-working American citizen. If I work hard all day long and I want to go home and in the privacy of my own living room and smoke a joint and just stare at the fireplace for three hours, that is my civil liberty.

Is it ever strange to be a public television host who's associated with something that's controversial?

Steves: I couldn't do it if I was in commercial TV. I have lost underwriting for this on my TV show. People have said, 'This is not good for your business.' This is more important than my business. What is wrong with somebody saying the truth even if it hurts your business? As far as my business goes, I have been talking about this quite candidly for a long, long time. Every once in a while somebody is going to say, "I know what you think about marijuana and I am not going to buy your guidebooks. I am not going to take your tours." All I can think is Europe is going to be more interesting and fun without you. 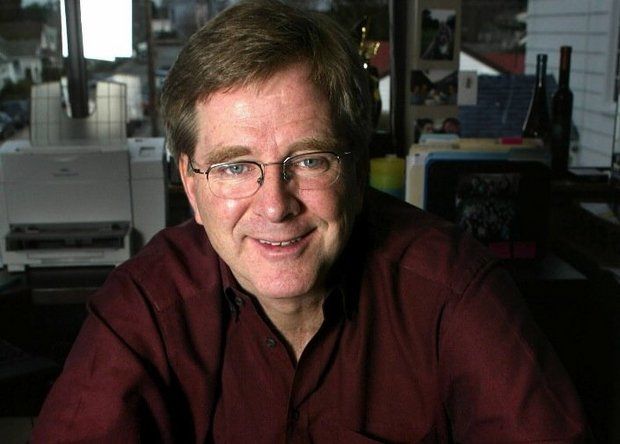