Rodriguez: Marijuana Act Would Be Locked In

Guam - A senator has raised concerns that if voters in November approve a bill that would legalize medical marijuana there would be no chance of amending the law. Whether or not that vote will happen is uncertain. The Guam Election Commission won't put the question on the ballot, saying the process of "legislative submission" is not valid. Lawmakers have asked the Supreme Court of Guam to decide the issue.

Sen. Dennis Rodriguez, D-Dededo, the only senator that voted against the measure, said if voters approve medical marijuana, the provisions of the new law will be locked in for two years. That means lawmakers would be unable to fix any problems that come up with the law, he said. Sen. Tina Muna Barnes, D-Mangilao, and Sen. Aline Yamashita, R-Tamuning, co-authored Bill 215, now Public Law, 32-134, which the governor allowed to lapse into law. The measure requires the Election Commission to ask voters if the Joaquin "KC" Concepcion Cannabis Act of 2013 should be law.

The act, if approved, would make medicinal marijuana legal on Guam. Marijuana could be legal for medical use for those with various illnesses, including cancer, epilepsy and multiple sclerosis. An earlier effort within the Legislature to pass the act and make medicinal marijuana legal on Guam didn't have enough support among lawmakers to pass. Local law states that once voters approve of a measure through legislative submission the Legislature won't be able to amend the law for two years. "This is a complex issue and once it's passed it can't be amended," Rodriguez said.

He would prefer that lawmakers pass a marijuana bill so they would have the ability to make changes later if there are any problems. "If this needs to be changed we won't be able to do that," he said. The only way the law could be amended is through another ballot question, which would cost a lot of resources and time, Rodriguez said. One of the major issues in the current bill's language is that it provides only $100,000 to the Department of Public Health and Social Services to implement the program. It also doesn't provide any funding for any other agencies that will have to enforce the law, he said.

"I'm not against something to better cancer patients or those who need help who are sick. But if we're gonna do this, let's do it the right way," he said. Barnes said she isn't concerned about the bill being locked for two years. She said the rules and regulations for medical marijuana aren't included in the bill and will still need to be vetted out by health professionals and the Legislature. "The law wouldn't complete this process. It will still need to go through a process," she said. An advisory board, which will consist of several health care professionals and other leaders in the community, will determine the rules and regulations, she said. "It's not a concern at all," she said. 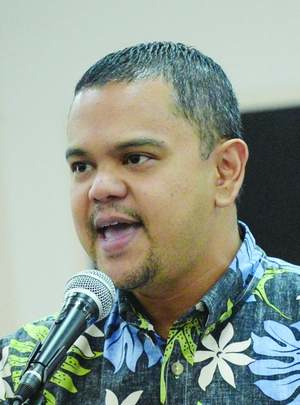 T
Rodriguez: Marijuana Act Would Be Locked In

May 18, 2014
The General
T
T
Educate: Ensure Voters Know What They Need To On Medical Marijuana