Roughed Up Over 29 Plants, 61-Year-Old Cancer Survivor With HIV Is Suing Police

A San Diego attorney for medical marijuana patients says they face a pattern of mistreatment by local police and is taking the issue to federal court. Attorney Nathan Shaman said he's filed a federal civil rights lawsuit against San Diego Police Chief Shelley Zimmerman and San Diego County Sheriff William Gore on behalf of Deborah Little. The San Diego County Integrated Narcotics Task Force conducted a military-style raid in October 2012 on Little, a 61-year-old cancer survivor who has HIV. Shaman said they roughed Little up and did lasting damage to her – because of her 29 pot plants.

San Diego County tried Deborah and her husband Dennis for unlawful cultivation and sales of marijuana in March, and a jury acquitted them of all charges. "Deborah Little was treated terribly," Shaman said. "They were treated like the enemy. I've seen this time and time again. There is never an attempt to ascertain who is actually growing there, if it's personal, commercial, if it's in compliance with state law."

"This is not outside the norm of what I've seen in my time as a medical marijuana attorney," Shaman said. "When I've seen dispensaries raided, I've seen employees held there without cause, and interrogated without having an attorney present, roughed up, thrown on the floor and into walls. [Police are] in camouflage and they have assault rifles and some of them are wearing ski masks. It's just a terrifying scenario."

Shaman's a University of San Diego School of Law grad who interned for the late Judge Napoleon Jones, Jr. in San Diego federal court, as well as in the county public defender's office. He draws parallels to Ferguson, Missouri – noting how an over-militarization of the police has poisoned what should be civil enforcement.

"The case of the Littles is more on the egregious end of the spectrum." Officials for both the city and the county told the San Diego Union Tribune they are not permitted to comment on pending litigation. Medical marijuana patient advocates say it's happening all over California. California legalized medical cannabis 18 years ago, and 5 percent California adults are estimated to have used it "for a serious illness," according to a 2014 study. Ninety-two percent of them are estimated to believe medical cannabis was "helpful" in treating their condition.

But access to medical marijuana is openly opposed by law enforcement and lobbyists for city governments – both of whom argue that cities can ban dispensaries, or the cultivation of a single plant. San Diego County had to be forced in state court to issue medical cannabis ID cards. The region has led the charge in cracking down on dispensaries.

Deborah Little is a cancer survivor who has had HIV for twenty years. She was growing the second crop of pot of her life when she got raided, and she was doing it rather poorly, Shaman said. The Littles had 29 plants, four plants over the California Attorney General's guidelines, but many of the Littles' plants had died or had become diseased, and were going to be destroyed.

Shaman said a doctor recommended the two grow as much as they needed. She needed more than 12 because she intended to make edibles – which treat HIV wasting and her husband's neuropathy and depression – and because she was a terrible cultivator and most plants would die. "Given those circumstances, it was reasonable to have 29 plants," Shaman said.

A sheriff's fly-over sparked the raid, and Shaman said police misidentified bamboo growing on the property, then sought a search warrant that wrongly stated that more than one hundred plants were being cultivated. A Google Maps view of the rural cul de sac shows lots of home agriculture in the hilly, rural area.

When camouflaged, assault rifle-bearing men kicked in Little's door before dawn, they hand-cuffed her and made her sit outside a fire ant hill. Freezing without a jacket, Little told officers she had pneumonia, so they put her in a cruiser with the air-conditioner on. Little told them she had kidney issues and needed to use the bathroom, but officers refused and she soiled herself.

Shaman wants a federal court to order the county and city to pay damages for violating the Littles' civil rights. This isn't a publicity case, Shaman said. A federal court could rule in their favor. Marijuana is illegal under federal law, but lawful in California – the issue is whether police acted unlawfully in their treatment of the Littles.

Local police displayed "reckless and callous indifference to the Fourth Amendment" when employing a SWAT-style raid featuring military fatigues and assault rifles, the suit states. And the Littles' weren't properly Mirandized before they were interrogated. The officers' conduct and official county sheriff policy is unconstitutional, Shaman argues.

"When police raid a property, they're mandated under federal constitutional guidelines to act reasonably and the way they behaved to the Littles was nothing short of utterly egregious," Shaman said. "They used SWAT-style tactics in a situation that provided no basis for them to behave that way at all. And even after finding out it was two people in their sixties who posed no threat, they treated them terribly."

They've "suffered tremendously," Shaman said. "For Deborah it's been both physical and mental. She lost a lot of weight and has been unable to use cannabinoids and is back on a normal cocktail of medications in full force. She's been in and out of the hospital. She's also terrified and suffers extremely traumatizing nightmares on a regular basis and still does not feel safe on her property." "Certainly the courts have repeatedly over the years stepped in when police use unreasonable, excessive force." "The Littles' situation provides a stark reminder that even harmless, law-abiding, seriously ill people can be and are terrorized by their own police force. We hope this will send a message to law enforcement that their egregious, unconstitutional behavior will not be tolerated," Shaman stated. 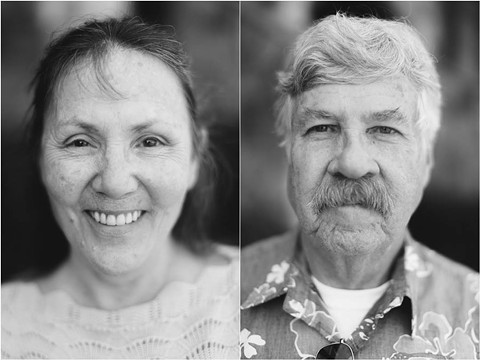 Reason # 278,492 why anyone in the world should be able to grow their own plants in order to increase their own quality of life. I feel for these people, so deeply.

Imagine if all the wasted efforts of the inept police force went to dealing with violent/sexual crimes instead. Or maybe the efforts could go into making criminals of the banks/financial institutions who make a living off of the debt of the poor by using shady and illegal business practices.

Without a doubt, we would be living in a much happier, safer, and healthier world.
The illegality of Cannabis is outrageous, an impediment to full utilization of a drug which helps produce the serenity and insight, sensitivity and fellowship so desperately needed in this increasingly mad and dangerous world.

They are beating up cancer survivors because they think they can get away with it.
C

its sad...i can only remember my late wife given Marinol in the hospital to help with her appetite it worked very well,and she was actually getting hungry and forming a appetite,unfortunately her cancer was advanced and she didn't survive...but to see her eat something by mouth instead of a liquid pushed through a IV tube into her veins,brought tears to my eyes,it is a God given herb and should be left alone.....shame on the San Diego P.D. and my thought are with the couple enduring this...keep your head up..:>

It's Counties Against State Again in Appeal of Pot Suit