The old Craftsman bungalow at 3015 H St. is directly across the street from McKinley Montessori, a quaint little nursery school and kindergarten. It's also about 200 feet from McKinley Park and not even two blocks from Sutter Middle School. That's all worth mentioning because the business inside the old bungalow sells marijuana. And so when the operators of A Therapeutic Alternative went to the City Council last week seeking a permit that would allow them to stick around, you might have expected an angry resistance. Would you want your kid going to school across the street from a pot shop?

But not a single person showed up at City Hall to voice outrage. Instead, one person after another spoke fondly of Kimberly Cargile's business. A guy who used to run a cafe across the street said the pot shop was a great neighbor. The directors of the Montessori school wrote the city a letter saying the dispensary is a compassionate, professional "asset to our neighborhood." Cargile lives in East Sac. She's made her shop a part of her neighborhood's fabric.

She tried to meet with every neighbor who sent the city a letter or called a City Council member to express disbelief that a pot shop could operate near schools and a park. The city prohibits medical marijuana to be consumed within 20 feet of dispensaries. Cargile's security guards enforce that prohibition for three blocks in every direction. "We had to prove ourselves," Cargile said. "We had to show we are not stereotypical potheads."

Cargile was sitting in the dispensary on Thursday afternoon, speaking proudly of what her collective has created. A friendly security guard stood watch over the locked front door. Inside, the air was cool and folk music played in the background. The antique furniture — red velvet couches, an old lamp — gave the place the feel of a bed-and-breakfast. It's also unmistakably a medical pot shop. It sells a menu of goods, from blends of weed called Purple Kush and Green Candy, to marijuana-laced peanut butter and popsicles.

It's allowed to provide those commodities across the street from a school because it was already in business when the city passed its medical pot ordinance in 2010. New shops aren't given that same benefit and can't operate within 600 feet of parks or schools. Cargile thinks those rules are unfair. She said her drugs help people suffering from terrible diseases and injuries. She is just 34 years old, but it's clear she's worn out from being part of a movement that keeps chugging along. At least her path is safer now. She's one of 17 permitted pot shops in the city. Nine more are in the pipeline, seeking city approval. It's funny, but the one that's selling weed across the street from a school may end up being the best neighbor of them all. 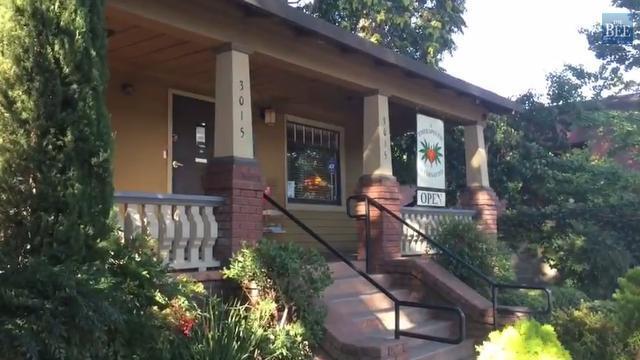 7 Pot Shops Ordered to Shut Down