Add San Jacinto to the list of cities tied up in code enforcement and court battles over whether storefronts that sell marijuana to patients can be regulated, and whether they are nonprofit patient cooperatives or dispensaries started to turn a profit.

In San Jacinto, Nature's Serenity Cooperative opened last October. After receiving a series of code-enforcement citations and a cease-and desist-order, its owners sued the city.

A Riverside County Superior Court commissioner ruled May 5 in favor of the city's position. Jorge Brambila, co-executive director of Nature's Serenity, said his attorney, James DeAguilera of Redlands, is seeking reconsideration at a June 17 hearing.

The city disputes whether Nature's Serenity is complying with state law. Even if it were in compliance, City Attorney Jeff Ballinger said, the city does not think that "immunizes them from city regulation."

The lawsuit asks for a court interpretation of an ordinance that outlaws medical marijuana facilities in San Jacinto, and an injunction to stop the city from enforcing that ordinance.

So far, Brambila said, "I think over a half a million dollars in fines" has been assessed on Nature's Serenity and the property's landlord.

The storefront in the 500 block of North State Street is in a commercial complex with pizza and taco restaurants, a smoke shop and tattoo parlor. Brambila, 26, of Riverside, said he and two co-executive directors operate Nature's Serenity.

On April 26, the Allied Riverside Cities Narcotic Enforcement Team served search warrants at the business and residences of the directors in Hemet and Riverside, according to a news release from the team, which is made up of law enforcement agencies.

Seven people were arrested, including Brambila, but he said all were released and no charges have been filed.

"They cleaned us out. They took all of our medications," Brambila said.

Just over 36 pounds of marijuana and less than a pound of hashish were seized, according to court documents. Other items included business and patient records, computers and two handguns.

Nature's Serenity "had been operating their business under the guise of a medicinal marijuana collective," according to the news release. The enforcement team alleges that it is operating outside the scope of the state's Medical Marijuana Program Act as well as the Compassionate Use Act of 1996.

"We do follow the law," he said, and he carries copies of the guidelines in his car.

Nature's Serenity had more than 3,000 patients before the raid, he said. Since reopening May 10, the numbers are around 500.

Brambila's civil lawsuit asked the court to stop the city from enforcing its municipal code banning dispensaries. His attorney argued that state laws prevent local governments from restricting or prohibiting them.

Superior Court Commissioner John W. Vineyard pointed out in his ruling that there is nothing in a state Health and Safety Code section that prohibits a city from adopting ordinances or policies that restrict the location or establishment of cooperatives or dispensaries. 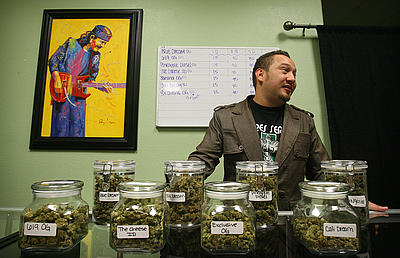