Voters will have a chance to overturn San Jose's strict new regulations on pot shops in favor of looser rules, though it will be a while before the weed war ignites at the ballot. It is the second time that marijuana activists have qualified a measure to overturn regulations adopted at City Hall. But while the last effort, a referendum, put the city's rule changes on hold and sent the City Council back to the drawing board, the newly qualified measure -- which polls indicate faces an uphill battle -- won't change anything unless voters approve it two years from now. The new measure, backed by a group of medical marijuana supporters with a history of fighting City Hall, would allow dispensaries to open in commercial zones that will soon become pot-free. Elections officials announced this week that the group had gathered about 25,000 valid signatures, about 5,000 more than needed for the initiative to be placed before voters.

The City Council in June voted to limit all shops to select industrial areas that make up less than 1 percent of San Jose, while the surviving weed stores would then have to adopt costly new safety and operational standards. Angry opponents argued that virtually all of San Jose's 80 dispensaries would have to close by the time the rules take full effect in summer 2015 and had warned they would try to overturn the law change at the ballot box. After meeting on the issue Tuesday, the council is expected in the coming weeks to place the measure on the next regular election ballot, in June 2016, as it would cost $3.5 million for a special election before then.

Council members, who requested more information on how the initiative could affect the city, could avoid the cost and hassle of an election by simply adopting the marijuana supporters' proposal, but they think they have the public on their side. A recent city-commissioned poll showed 74 percent of likely voters supported the city's new regulations amid concerns that the pot shops were degrading neighborhoods, supplying kids with drugs and contributing to crime.

What's more, Mayor Chuck Reed has vowed to lead a campaign to defeat the measure even after he is termed out at the end of this year. He is already questioning whether allowing pot shops in commercial zones could lead to neighborhood business districts such as downtown Willow Glen to turn into "Little Amsterdam." He said he had "grave concerns" about the initiative, and his allies on the council agreed. "I can't believe that this actually passed muster," Councilman Johnny Khamis said of the initative making the ballot. He was one of the council members who accused signature gatherers of telling voters the new rules banned pot shops.

Yet the group behind the initiative, called Sensible San Jose, argues that if the rules wind up being so harsh that all shops have to close, the city would lose $5 million in tax revenue from the shops while some legitimately ill weed smokers would turn to drug dealers. Polls also indicate the left-leaning San Jose electorate is strongly opposed to a complete ban on dispensaries, and by the June 2016 election, the new rules will have been in effect for a year -- long enough to tell if they're working.

"It gives us an option. Is it a de-facto ban? Have prices gone through the roof, has quality of service declined, have patients gone back to the underground market?" said Sensible San Jose chair James Anthony, an Oakland-based attorney. "My guess is it won't be a functional system." Seven cannabis shops -- representing less than 10 percent of existing dispensaries -- have been granted permits to operate under the new rules starting next year and a couple others are expected to be approved soon.

Sensible San Jose also gathered enough signatures in 2011 to place a measure on the ballot to block an initial set of regulations adopted by the council. That time, the city backed down and repealed the new pot shop rules before an election could take place, but city leaders say that won't happen this time. Following the council's 7-3 vote in June to adopt the regulations, opponents had divided into two groups. Before Sensible San Jose's measure was cleared for the ballot, a different group, which promoted even looser regulations, failed in its initiative drive when election officials declared most of their signatures were bogus. 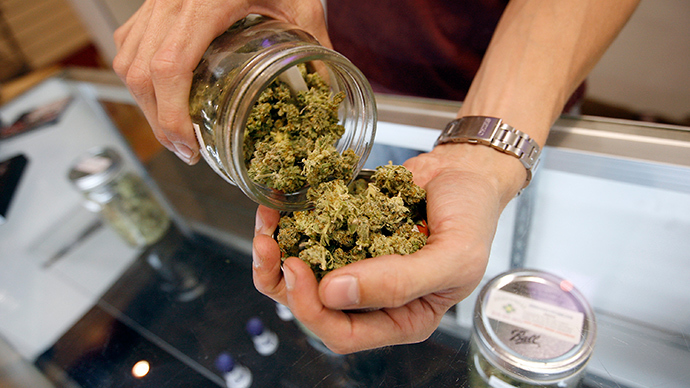