Pot clubs seeking to overturn strict new medical marijuana regulations failed in their bid to place an initiative on the ballot, giving city leaders a victory in the ongoing San Jose weed war. The vast majority of the city's 80 dispensaries will have to close by July 2015 under regulations -- approved by the City Council last month -- that limit pot clubs to less than 1 percent of the city's parcels. A few dispensaries near homes already have shut down. But in a repeat to a similar 2011 tussle, a rag-tag group of marijuana advocates quickly began gathering signatures in hopes of putting their own, much looser regulations on the November ballot. They offered coupons for free weed and referrals for medical marijuana cards to entice signatures and held "Occupy-style" protests at City Hall. The group turned in its petition on Friday -- appropriately at 4:20 p.m. But the City Clerk's Office on Monday counted the signatures and found the total to be more than 10,000 shy of the 33,262 registered voters needed to qualify for the ballot.

"I think it says that the voters agree with the council -- that it's time for sensible regulation," said Councilwoman Rose Herrera, who has opposed the clubs. "This helps keep them away from schools and interfering with businesses." Dave Hodges, the proponent of the initiative, said at one point the group thought it had as many as 75,000 signatures. But with a week to go in their 30-day drive, they started checking the names and discovered most of them were bogus. "At some locations, 75 to 80 percent of the people who told us they were registered voters actually weren't," said Hodges, who owns the All-American Cannabis Club in San Jose.

A separate group that had proposed what it called more moderate regulations decided not to collect signatures after Mayor Chuck Reed vowed to personally lead a campaign to defeat any pro-marijuana ballot measure. That group had successfully fought off regulations approved in 2011 after collecting enough signatures to qualify a measure for the ballot, prompting city leaders to back-track on their plans at the time. The fear of a competing ballot measure has shaped the council's discussion on pot regulations over the last half-decade, with council members leery of approving changes that would get overturned at the ballot.

Ultimately, the council decided not to go the route of about 200 California cities that have prohibited pot shops altogether, citing city polling data that showed residents were strongly against a ban. Instead, the council limited the dispensaries to a few select industrial pockets and enacted costly operating rules such as round-the-clock security and a requirement to grow marijuana within Santa Clara County or a neighboring county. "San Jose will now have a strong and effective regulatory system that meets federal and state guidelines to control bad behavior while allowing people who are sick to have safe access to medical marijuana, Reed said in a statement. The rules, which are stronger than those enacted in San Francisco or Oakland, amount to a de-facto ban, medical marijuana advocates say.

"It's going to be a really different San Jose. There will be much fewer locations," said James Anthony, an attorney who led the 2011 effort and lobbied against the regulations again this year. "At the moment, it seems like the city's in the driver's seat. There is no referendum. I'd say at this point, the focus is on complying" with the regulations. Although most shops will have a one-year grace period to move or close, the rules took effect Friday, allowing club owners who find a space at one of the eligible parcels to start signing up for their new licenses. 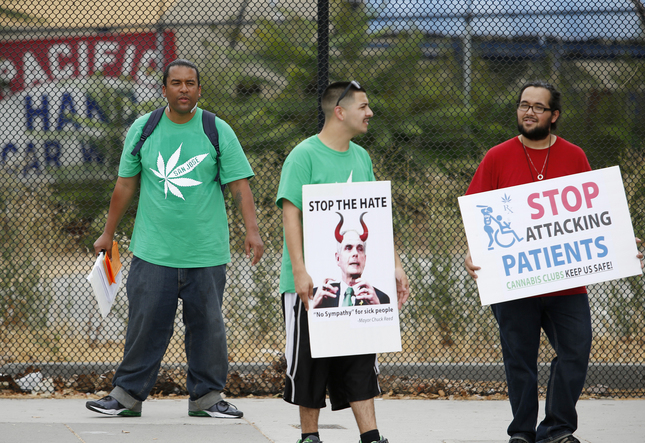 I guess in San Jose, the City Council is not worried about closing businesses and laying people off -- in the rest of the U.S., the employment situation is much different.