California - The Santa Cruz Planning Commission approved plans Thursday for a new medical marijuana dispensary to open where one closed last year. The advisory panel unanimously approved a special use permit for CannaCruz Collective, a nonprofit operated by two brothers from Aptos who became interested in opening a dispensary after their father suffered a stroke and did not respond well to some pharmaceutical drugs. The shop at 115 Limekiln St. will replace Santa Cruz Patients Collective, which closed in May 2012. There are only two dispensaries allowed within the city; the other is located nearby on Dubois Street. Barbara Palmer told the commission her sons, Grant and Brad, will provide a comfortable, safe place for older generations to receive medicine. "I can assure you my sons are completely sincere and passionate and will be upstanding people in that area," Palmer said. But two Harvey West area residents expressed concerns. Daniel Crews, who lives on Encinal Street, said he is concerned about customers camping before the shop opens in the morning. "It is a problem area and something needs to be done with this corner, but I'm not sure if this is the right thing," he said.

Nancy Anecito, a Fern Street resident, said she supports medical marijuana but added there were problems with the previous dispensary, including customers parking away from the building to avoid being seen by security cameras. Some, she said, smoked in their car on her street, and shared their medicine with others. "I would like to see these issues addressed," she said. The Palmers said customers will be encouraged to park in the building's own lot, will not be allowed to loiter and will be banned from getting medicine if they smoke it near the building or in Harvey West. The Palmers also encouraged neighbors to report license plates of patients who cause problems. Chair Mark Mesiti-Miller said, "This is an applicant that sounds extraordinarily sincere and I'm impressed. I encourage the neighbors to take them up on their offer to manage their clientele." CannaCruz will have at least one uniformed guard while the shop is open and provide extra First Alarm security in the area. The building also will have security cameras and a trespass letter allowing police access after hours.

Police Lt. Warren Barry said the facility's security "would rival our financial institutions" and the building, empty as it is now, "is more of a public nuisance" because it attracts illegal camping. The facility is located within 600 feet of a private school, which the city's ordinance does not allow without a variance. However, because the school has no permit to operate, the dispensary can be approved while the school seeks proper authority to remain open, city officials said. 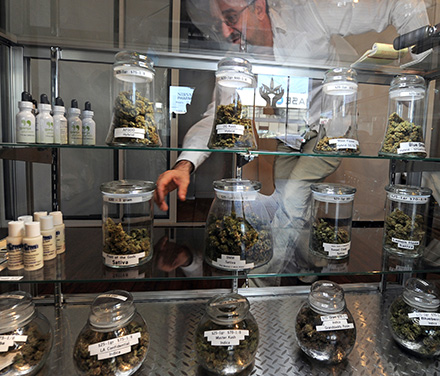