Surrounded by thousands of packages of marijuana, Seattle's top prosecutor sought some advice: Which one should he buy? A new day, indeed. Twenty months after voters legalized recreational cannabis for adults over 21, Washington state's first few licensed pot shops opened for business Tuesday, catering to hundreds of customers who lined up outside, thrilled to be part of the historic moment.

Dressed in a pinstripe suit, Holmes stood inside Seattle's first and, for now, only licensed pot shop, Cannabis City, south of downtown. The shop was sweltering. He fanned himself with a state-produced pamphlet titled "Marijuana Use in Washington State: An Adult Consumer's Guide." Unsure what to buy, he asked the owner of the company that grew it, Nine Point Growth Industries of Bremerton, who recommended OG's Pearl. The strain tested at 21.5 percent THC, marijuana's main psychoactive compound. The shop's 26-year-old twin salesmen, Andrew and Adam Powers, explained its benefits to Holmes: mainly, that the taste is not too "skunky" to turn off the occasional user.

Holmes noted it had been quite some time since he smoked pot. He paraphrased a line from the "South Park" cartoon series: "Remember, children, there's a time and place for everything. That place is college." He spent $80 on 4 grams, including $20.57 in taxes. "I bought 2-2 gram bags of OG pearl which was recommended. I'm keeping one bag for posterity and one for personal enjoyment at some point when it's appropriate," said Holmes. Washington is the second state to allow marijuana sales without a doctor's note. Voters in Colorado also legalized pot in 2012, and sales began there Jan. 1.

Washington's Liquor Control Board began working right away to develop rules governing just about every aspect of the industry, from what fertilizers can be used to how extracts are produced. But the board has been overwhelmed: Nearly 7,000 people applied to grow, process or sell pot, and those licenses are being reviewed glacially by the board's 18 investigators. Fewer than 100 growers have been approved, and only about a dozen were ready to harvest in time for the market's launch. As for the stores, most first had to get lucky in state-run lotteries for 300-plus retail licenses being issued. Then they had to strike deals to buy product from the growers – in many cases at exorbitant prices.

Much of the marijuana being sold Tuesday cost at least twice the $10 to $12 per gram offered by the state's unregulated medical dispensaries. In Seattle, hundreds of people waited in the warm sunshine outside for Cannabis City to open at noon. Store owner James Lathrop declared it time to "free the weed" and cut the ribbon – actually yellow police tape strung across the shop's door.

His first customer, 65-year-old retiree Deb Greene, hugged and thanked Alison Holcomb, the author of Washington's marijuana law, before placing her order for 8 grams, totaling $160 with tax. Greene said she got excited and bought twice as much as she intended to. The hype surrounding the pot shop openings was unwelcome in some quarters. Derek Franklin, head of the Washington Association for Substance Abuse and Violence Prevention, said it can "normalize" marijuana use for children. He lamented that the state only recently scraped together some money for a digital and radio advertising campaign to urge parents to talk to their children about marijuana.

"This kind of messaging, not only is it too late, but it's not nearly in-depth enough," he said. "If we're the big marijuana social experiment, well, there's no experiment I'm aware of that you go into without informed consent." Bellingham's first store, Top Shelf Cannabis, made more than 400 transactions by late afternoon. It opened at 8 a.m., when Cale Holdsworth strode to the counter and bought 2 grams for $26.50.

"This is a great moment," said the 29-year-old from Abilene, Kansas, as a swarm of reporters and television cameras recorded the moment. Holdsworth was in town with his girlfriend, Sarah Gorton, and her younger brother for her grandfather's birthday. "It's just a happy coincidence and an opportunity we're not going to have for a long time," said Gorton, 24. "I'm really thrilled to be a part of something that I never thought would happen." The trio planned to head back to their relatives' house and sample the purchase. "We're probably going to break open a bottle of wine, sit on the porch and enjoy this," she said. 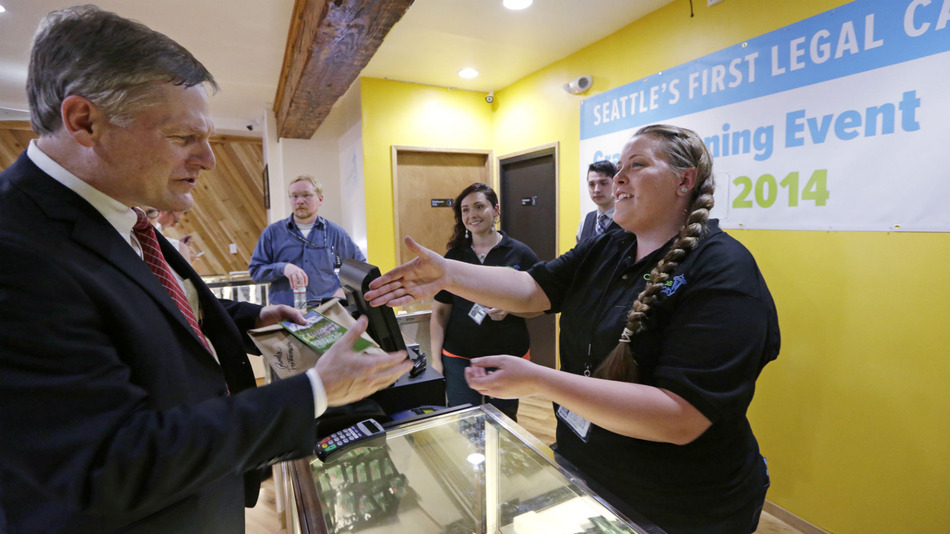 T
Hundreds Line Up For Legal Pot In Washington State

Jul 8, 2014
The General
T
T
Seattle's About To Get Its Second Legal Pot Shop