It's been a frustrating month for Seattle's only retail marijuana shop, as a lack of pot has forced Cannabis City to keep its doors closed for much of the time since legal sales began July 8. "We did have a small supply on Sunday, but that only lasted a few hours," says Pam Fenstermacher with Cannabis City. They're not alone. A lack of supply has been the biggest hurdle for Washington's new legal marijuana industry, with retailers like Cannabis City left waiting for growers trying to bring their crop to harvest as quickly as possible.

Fenstermacher says the shop hoped to receive a new shipment Tuesday, but a delay in testing has pushed that back to Friday. "It's becoming a little bit more consistent, so we are hoping by the middle of August, maybe towards the end it, should be a steady supply and we shouldn't have to shut our doors." The Washington State Liquor Control Board, which regulates the state's marijuana industry, is moving as quickly as possible to approve licenses and get the system fully operational.

"We add more producers and processors and retailers every week. This will continue to grow and stabilize," says spokesman Mikhail Carpenter. Updated numbers released by the WSLCB Tuesday show the nascent industry has generated $614,985 in excise taxes for the state, with sales by processors, producers and retailers totaling $2,459,940 since July 8. Those numbers should steadily increase as more licenses are issued, and more companies continue growing and selling pot to each other and consumers.

"It will definitely pick up," Carpenter says. In the meantime, stores like Cannabis City remain in limbo, biding their time by selling pipes and other paraphernalia or simply staying shut. But Fenstermacher says there's no shortage of enthusiasm from customers, even if there's a shortage of pot. "People understand it's a new industry and have patience," she says. 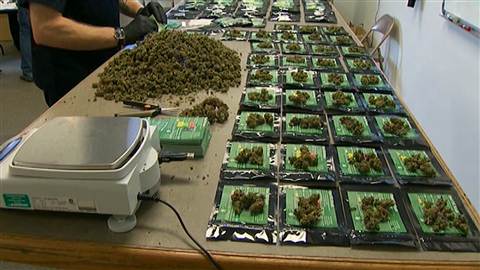 T
Seattle's About To Get Its Second Legal Pot Shop