Sue Taylor works hard to stay fit, and stay healthy. This 68-year-old is a regular at the gym, eats kale to keep her cholesterol down, and at home, "homemade" is her motto.

But there's one thing in her healthy lifestyle that may come as a surprise: she includes MARIJUANA in her quest to stay youthful.

She showed Petersen her Gummi Cares: "It has the consistency of a gummi, and I use it for sleep and pain when I need to."

Taylor was a high school principal, preaching the dangers of drugs. But after her son got into the pot business, and as she began to learn more about marijuana, she changed her mind. Now she is a convert -- make that an ADVOCATE -- for aging Americans using marijuana.

She speaks at community meetings, explaining why pot may be good for them.

And she's got statistics on her side. Polling confirms that more and more Americans age 55 and up are using more and more marijuana.

One reason is geography: almost half of Americans live in a place where marijuana is legal for recreational or medical purposes.

Sue (who's known as "the Weed Lady") lives in California, one of the states where medical marijuana requires only a doctor's prescription.

So what are the kinds of things marijuana helps if you're a senior? "Number one is arthritis," Taylor said. "There are tinctures and rubs that you could actually put on your legs, on your knees, across your back, wherever you're having any arthritic pain. Most seniors use the cannabis for pain and to sleep."

Dr. Igor Grant, a distinguished professor and chair of the Department of Psychiatry at the University of California, San Diego, is frustrated that there isn't more money for research. "But I so think we are turning a corner on that," he said.

Dr. Grant is the recipient of one of the rare federal grants allowing him to research the potential benefits of pot.

"First of all, there is increasing evidence that cannabis is helpful in the management of certain kinds of pain," he said. And it's the kind of discomfort experienced by seniors, like sharp pains felt by nerve damage, caused by things like chemotherapy or diabetes.

Keep in mind, Americans over-65 only account for 14 percent of the nation's population, but they use more than 30 percent of all prescription drugs, including some highly-addictive painkillers. "An interesting question is, if people are prescribed cannabis, does that have then an opioid-sparing effect?" Dr. Grant said. "Because again, for chronic pain we do use opioids -- Vicodin and drugs like this."

So cannabis could replace opioid use? "Right, or lessen the requirement. We need studies to understand that. But I think the preliminary evidence suggests that may be true."

Kerry Stiles, 78, wears a pacemaker. And he discovered pot at the Rossmoor retirement community in Walnut Creek, across the bay from San Francisco. "I drop it under my tongue, about five or six drops, and that helps me sleep," Stiles said.

Here, there are clubs for everything from swimming to cars. And now there's a club for medical marijuana use.

In this retirement community of more than 9,000, the club has about a hundred regulars.

Renee Lee is its president, and a kind of pot guidance counselor.

"We caution, especially the seniors, to stay away from edibles, and really start slow," Lee said. "We start with low dosage, we start in the early evening, telling them not to drive, not to mix alcohol. There's a lot of cautions, a lot of education that goes along with it."

But for some in the over-65 crowd, lingering stereotypes -- and stigmas from another time -- are hard to overcome.

Petersen asked, "Why do you think seniors are resistant to this, as opposed to twenty-somethings and thirty-somethings, who don't seem to pay any attention to the stigma at all?"

Our nation's pot paranoia actually dates to the 1930s. (Remember "Reefer Madness"?) Then, during the Nixon Administration, the federal government classified it as a so-called "Schedule One" drug -- the category that includes heroin and cocaine.

"It was publicity by the federal government and by state governments [about] how terrible it was, and what it could do to you," Kerry said.

"But will you change minds if more and more seniors become comfortable with this?" asked Petersen. "Do you think that's going to force government to change its mind, the federal government?"

"We certainly hope so. I don't know if it'll be in my lifetime!" Kerry laughed.

Keep in mind that, even today, pot is still illegal under federal law.

But in Colorado, the first state to sell marijuana for recreational use, Governor John Hickenlooper, who initially opposed legalization, now says he sees how it can work for those over-65.

"For seniors that want to, kind of, relax and don't want to use alcohol, this is a choice maybe that they will embrace more than others," Hickenlooper said. "

And THAT could tip the balance this fall when states across the country vote on legalizing marijuana. You can expect to see proposals to legalize marijuana on ballots nationwide (including in Florida, Maine and Nevada).

And as more and more seniors embrace medical marijuana, that could make a difference at the polls.

"How does that impact the perception, 'cause seniors seem to be people who vote more often and have some influence. Is it gonna have some effect?" asked Petersen.

"Well, that's an interesting point, and I think you're probably right," said Hickenlooper. "The perception against legalizing marijuana [was], you know, historically in this state when we passed it, seniors were probably the most adamant against it. And if more are using it, then that probably is going to change.

"And probably it won't just be in Colorado. It will probably change across the country."

This fall California, the first state to legalize medical marijuana, may vote to approve pot for recreational use, making it even easier for pro-pot folks like Sue Taylor to get access to the drug they now consider a vital weapon in their battle against the aches and pains of aging.

"Seniors don't want to get high; they want to get well," Taylor said. "And the cannabis helps." 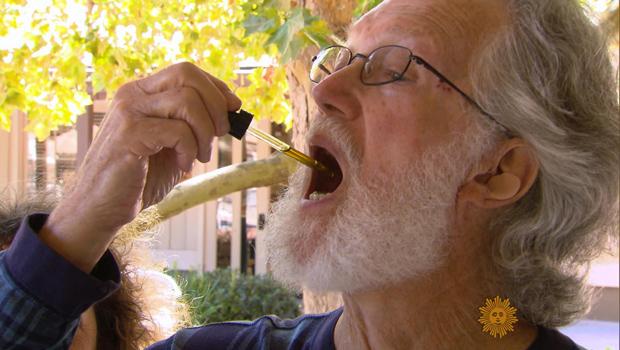 I'm a senior, and I agree, cannabis does lots of good things for seniors! The benefits of cannabis are enhanced/multiplied for seniors who stay away from the trash offered by BigFood, do bioidentical hormone replacement, and use nutritional supplements. Having had celiac before I was a senior, I find free essential amino acids really help; it is likely that most seniors have low blood protein, which is why nutritional writers are now recommending the athlete's helper (free essential amino acids) for seniors.
You must log in or register to reply here.
Share:
Facebook Twitter Reddit Pinterest Tumblr WhatsApp Email Link
Top Bottom