Inside Laguna Woods Village, retirees with stiff knees and failing eyesight make ready use of wellness centers and medical offices scattered throughout nearby strip malls. Residents such as Peggiann "Benji" Johnson – a breast cancer patient experiencing the side effects of chemotherapy – say one more healthcare service is needed: A marijuana dispensary.

As cities throughout California fight to limit cannabis outlets, residents and leaders in the south Orange County seniors-only village of around 16,400 have pushed for a pot shop and joined collectives by the hundreds. The medicinal use of marijuana has been legal in California since 1996. But the fight over how and where it should be distributed is being waged in city halls and courthouses across the state.

Seniors stand as a potentially powerful voice in the debate that often is thought to be taking place among young adults, those who oppose government oversight, and people who believe the sale and distribution of pot is intrinsically linked with crime.

The retirees behind the gates of Laguna Woods are a blend of those born during the Great Depression and baby boomers from the Woodstock era, when marijuana was seen as a gateway to hard-core drug use and a catalyst for neighborhood decay. Even those who don't smoke pot typically say that as long as there are no problems, they don't mind what others do. A 2013 survey by the Pew Research Center found that half of baby boomers nationwide support marijuana legalization, as do 32% of those born the generation before, an increase that marks "a striking change" in opinion among an older population.

And as seniors – who make up the most reliable voting bloc in America – see others get on board with marijuana, they may be drawn to the cause for legalization, said Dan Schnur, director of the Jesse M. Unruh Institute of Politics at USC. "If you're an older voter and the only pro-marijuana surrogates you see are 30 or 40 years younger than you are, that may have somewhat limited appeal," he said. "But hearing the same message from someone with whom you feel a common bond may be more persuasive."

Residents in the neatly groomed enclave of Laguna Woods, where the median age in 2010 was 77, say the leafy plant has become a necessity for many trying to manage pain. They smoke it, eat it, dab lotion mixed with cannabis on sore joints and summon sleep with a pot-spiked candy bar. Six years ago, when Bob Ring was mayor pro tem of Laguna Woods, he supported those who wanted a dispensary in town. He wasn't a marijuana user himself, but friends had convinced him of the medical benefits.

Ring's council colleagues adopted a law that set out the rules for selling cannabis from a storefront: A dispensary couldn't be within 1,000 feet of any place frequented by children, couldn't be near another dispensary and couldn't be open Sundays.

In the end it didn't matter. None of the commercial landlords in town would rent space to a pot shop. "We tried," said Ring, who is 81 and remains a City Council member. "Certainly at my age, in this stage of life, I don't want to give anyone a hard time." Without a pot shop, Johnson, 64, and others struck out on their own, forming and joining collectives. Although there are advantages to a bricks-and-mortar dispensary – they can carry a wider variety of merchandise and are open at predictable times – some collective members appreciate the casual, more personal interaction of meeting with their distributor, often in the comfort of a living room.

Every two or three weeks, Johnson walks the short distance from her home to the apartment of Lonnie Painter, a former chef and restaurant owner who is director of the Laguna Woods Medical Cannabis collective. On a recent trip, the musty scent of marijuana rolled over Johnson like a wave when she passed through Painter's front door. Guitars were leaning in a corner of his living room; photographs of Frida Kahlo, Che Guevara and Ernest Hemingway hung on the light-green walls.

Johnson sat down on the couch, a pink baseball cap pulled over her bald head. She trusts Painter, 68, and lets him pick out her supply. The silver briefcase on the low table before them held eight jars, each filled with a different strain of marijuana – Kashmir, Skywalker, Moby Dick. There are differing concentrations of THC, the ingredient responsible for marijuana's psychoactive effects, and of CBD, the compound said to have medicinal benefits.

"Ah, smells so good," Johnson said as Painter unscrewed the lid of a jar of cannabis called Harley Tsu 1. As an advocate of tighter medical marijuana regulations, Painter said, he worries about "pot doctors" and dispensary operators who don't have proper schooling and collectives that offer inferior products. He attends conferences, studies the shifting legal landscape and stays up on the latest literature – such as a study from Leiden University in the Netherlands on how to brew pot into anti-inflammatory tea.

In the early going, Painter – who has shoulder-length silver hair, tattoos and a calming voice – grew his own marijuana on a plot in the Laguna Woods Village community garden. Eventually he and several others filled out paperwork with the county to do business as Laguna Woods Medical Cannabis. Members of the collective are required to have a current physician's recommendation; the group operates as a nonprofit, in accordance with the state attorney general's guidelines.

Having used cannabis before to help the arthritis in her spine and feet, Johnson said, she now smokes once or twice a day to ease her aches, calm her stomach and control her diarrhea. "I wanted something that would make me feel better right then and there," she said. Thanks to the weed, Johnson said, she had the strength to act in a recent community production of a Shakespeare play and no longer has to ask neighbors to help her walk her dog, Lucy, a golden retriever-cocker spaniel mix.

Although many of the believers in Laguna Woods Village have used marijuana off and on for much of their lives, 85-year-old Pat McClintock had never considered it – until her back pain set in. At first McClintock, a former convenience store owner from Texas, sought relief with acupuncture, chiropractic treatments and cortisone shots. She gave up pickleball, table tennis and golf.

Nothing helped. So when a physician's assistant suggested that she try cannabis, she figured she would "give it a whirl." McClintock obtained a medical marijuana recommendation from a doctor in March and joined Painter's collective. Now she exercises every morning, goes to the hot tub in the evening and squirts drops of marijuana oil into her mouth every night.

"It could be the pool, it could be the marijuana," but whatever it is, she said, she can walk farther now than she could before. Robert Evans, 52, knows his cancer eventually will win. It's in his liver, his kidneys, his intestines. In June, doctors told the former drug and alcohol counselor, who now lives in Laguna Woods Village with his mother, that he had just 60 days to live. Sitting alone on a couch, Evans said, he sometimes thinks too much about the pain.

He doesn't think that marijuana can save him. But it's improved his quality of life. "It's helping me die a little bit easier, which seems like one of those rights we should have," Evans said. With cannabis oil and a daily smoke, he vomits less frequently. He can work up a little more of an appetite, although his face is gaunt and his body appears to be shrinking inside his baggy T-shirt and jeans. "This is how I'm going out," he said, walking onto his porch. He held a joint in his hand. 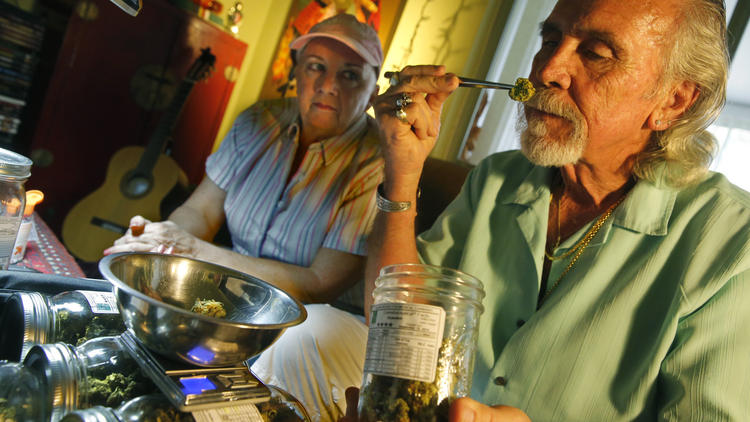